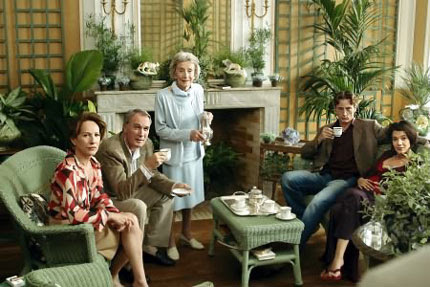 [This post is part of Ten Days' Wonder, a Claude Chabrol blogathon, hosted by Flickhead]

Claude Chabrol's The Flower of Evil is a very deceptive film, but, given the story Chabrol's telling, it would sort of have to be, wouldn't it? At the center of the story -- and virtually the only characters in the whole film -- is the Charpin-Vasseur clan, a family with a highly scandalous past (and not much less scandalous present) that is made public when an anonymously written leaflet about the family -- detailing everything from unsolved murders to Nazi collaboration -- is distributed to the public in the wake of Anne Charpin-Vasseur's (Nathalie Bye) announcement that she's going to run for political office.

Anne's husband, Gerard (Bernard Le Coq), is very much against Anne's political ambitions, though his reasons for this are never made entirely clear. He's also serially unfaithful to Anne, which is one -- but only one -- of the reasons that his son Francois (Benoit Magimel), who has just returned home after four years in America, dislikes his father. This dislike is shared by his step-sister, Michele (Melanie Doutey), who is Anne's natural daughter. Her natural father, and Francois's natural mother, died together in a car accident years ago. They were, respectively, married to Anne and Gerard, and their deaths brought those two together, although the Charpins and the Vasseurs had always been very close over the years, and intermarriage had bonded the two for generations. The families are so close, in fact, that Francois and Michele have long harbored a non-familial love for each other, which Francois's return to France has rekindled.

Rounding out the characters, and joining Francois and Michele in their dislike of Gerard, is the elderly Aunt Line (Suzanne Flon). It was Aunt Line's father who was the victim of the unsolved murder mentioned in the leaflet, and Aunt Line herself was actually tried for the crime, though she was acquitted. Though Aunt Line dislikes Gerard, I got the impression that she did so for no reason more specific than because Gerard is so very unlikable; generally Aunt Line wants to simply get along, and wants her family to get along, and to be happy. Although it's not her political campaign that is in danger of being derailed, the leaflet may trouble Aunt Line the most, as it dredges up so much anguish that she hoped had been buried.

The Flower of Evil plays, at times, like a mystery, the central question being "Who wrote the leaflet?", but that isn't really what it is. What the film really seems to be trying to do is explain its title, and I mean that as a compliment. I think viewers can be forgiven for not having a complete understanding of all the backstory laid out by the leaflet -- which, we're told by Gerard, is "all true" -- but that's not terribly important. What is important is the knowledge that this family, or pair of families, has been laced with deviance and, yes, evil for decades. What can such a past do to future generations, even as those deficiencies would seem to have thinned out over the years?

Earlier, I referred to Francois and Michele as step-siblings, but in the film, at one point, Francois refers to Michele and himself as cousins, which would make their relationship fully incestuous, as opposed to only technically incestuous. I don't have the family tree completely clear in my own head, but if they are indeed cousins, then the fact that they don't hide their intimacy from their family, and that intimacy is not only accepted by the family, but in some cases actually embraced by them, becomes a little alarming. I'm told France is more permissive than the US in sexual matters, but this is really pushing it. Which is, finally, I believe, the point. The Charpin-Vasseurs are so terribly casual in their abnormalities. Francois and Michele are very likable (and also very well played by Doutey and Magimel, but then the high quality acting in this film is formidably consistent, with my own favorite performance coming from Le Coq -- his Gerard is so exquisitely, humanly awful), but the ease with which they slip into their relationship, and the happiness that Aunt Line takes in seeing them together, is faintly chilling.

Not just that, but when murder finally occurs, as you sort of know it will, and two characters are attempting to hide the body, at one point they lose their grip on the corpse, and both break into laughter. By this time in the film, there are a great number of moral complications and grey areas revolving around this crime, but if two more normal people had found themselves in the same awful situation, I don't think laughter would ever be a feature of their evening. It is for these two, though, because in the history of the Charpin-Vasseurs, violence runs deep, as does secrecy and sin. If they didn't laugh, they'd go crazy.

In a sense, I believe that Michele and Francois are the title characters. As the youngest generation of this diseased line, they are the ones who are most able to see all that is wrong around them and try to step back from it. But as I've said, they have their own problems, still inherited from their ancestors. If, perhaps, they could see past the ends of their own noses, and possibly try to, you know, not marry their own family members, they could have children who were still more cleansed than they are, and those children could have children, and on down the line. There could be a light at the end of the tunnel, maybe, but probably not the way these two are going about it.
Posted by bill r. at 8:41 AM

And now I want to see this one too. I've really been pleased with Chabrol so far and this line, "The Flower of Evil plays, at times, like a mystery, the central question being "Who wrote the leaflet?", but that isn't really what it is" seems to be key to Chabrol. He sets up movies to seem like one thing, to play with audience expectations, so he can get down to examining something that the audience might not have showed up for if they'd known it wasn't a mystery, or a thriller, or whatever.

Yet the film WAS mysterious and thrilling, even so. I considered getting pretty deep into spoilers, and maybe I should have, for blogathon purposes, but decided not to. As a result, there's much about the film I didn't even touch.

This is only my fourth Chabrol, but I'm also pretty keen on the guy at this point. I watched several films this weekend, but the pairing of this and Sansho the Bailiff was pretty extraordinary.

I realized as I read your post that I've actaully seen the beginning of this film at some point, but - for whatever reason - got distracted and never saw the whole thing. This is now going into the Netflix queue, along with quite a bit of other Charbrol. Nice review, Bill.

Thanks, Pat. I watched the film on Saturday, and then on Sunday, when I was flipping around the channels, I saw it was playing on IFC or Sundance, so you might keep your eye on those channels.

This sounds like another look at class warfare, implicating, if I read this right, the upper crust from ancient families. Chabrol is so obsessed with the corruption of society, but he never really seems to break out of his blaming of France's caste system. Perhaps only in The Comedy of Power, which is the only overtly political film among the handful I've seen. My cousin used to talk a lot about how imprisoned the French are (she lives there), but that was in the early 80s. I think the country has moved on a bit.

This sounds like another look at class warfare, implicating, if I read this right, the upper crust from ancient families...

Anne does some campaigning in a poor neighborhood, so class is certainly not entirely absent from the film, but Chabrol doesn't exactly make it the carrot that wags the dog. The film seems to me to be more of a "sins of the father" kind of thing.

An excellent article, Bill. Thank you for joining the blogathon.

"I don't have the family tree completely clear in my own head, but if they are indeed cousins, then the fact that they don't hide their intimacy from their family, and that intimacy is not only accepted by the family, but in some cases actually embraced by them, becomes a little alarming. I'm told France is more permissive than the US in sexual matters, but this is really pushing it."

It took me several viewings to weed through the families; Francois and Michele could very well be siblings, the family trees are so inbred. This isn't a reflection on European or French customs, but rather Chabrol's harsh criticism of the bourgeoisie. Since they aren't part of "the real world," they're forced to cling to one another in a private universe.

Thanks, Flickhead. It was my pleasure.

This isn't a reflection on European or French customs...

Oh, I know. I was just making a joke. But...you think they could actually be siblings? Eesh...