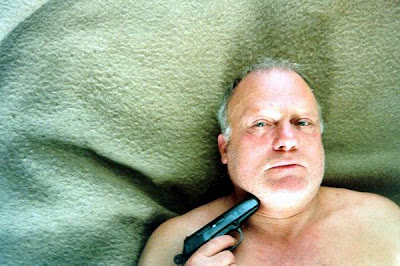 Gaspar Noe's I Stand Alone is no Taxi Driver, however desperately Noe might wish it was, but for much of its length it's a reasonably effective knock-off. Philippe Nahon (pictured above, in a contemplative moment) is very good as The Butcher, an unemployed, middle-aged man whose turbulent history up to the point of the film's beginning is recounted in uninflected, yet sardonic narration, while a Nazi-esque march plays in the background. His rage at the world is both putrid and banal, though his banality may not necessarily reflect badly on Noe, as the sort of man we're dealing with in I Stand Alone, as they exist in the real world, are hardly the deepest of thinkers.

So okay: I thought the film worked, for the most part, and Noe's preferred method of arist-to-audience communication -- shocking sex and violence -- spreads the existential sleaze on just thickly enough. But I want to focus exclusively (and very briefly, as I'm back home now, and completely wiped out) on one moment that really drove me up the wall. With about fifteen minutes to go, a title appears on screen that says, roughly, Warning! You have 20 seconds to leave the theater. Danger! Then we get a countdown to the film's big, shocking climax, which then shocks us, and then the movie's over.

There are a couple of things that are supremely obnoxious about this bit of self-congratulatory post-modernism. One is that it drops its post-modernism into the middle of a film that primarily shoots for a naturalistic tone (with some mild exceptions). In that sense, the title card merely doesn't work, which is excusable. Less excusable is that it exposes Noe as someone who positively adores his own transgressions, and who seeks to shock his audiences so that he can pat himself on the back for his bravery and honesty. As if that wasn't enough, the title card -- like the rewind scene in Michael Haneke's Funny Games -- also saps his climax of nearly all of its natural, visceral power. While Nahon's performance (as well as that of Blandine Lenoir, with whom Nahon shares the end of the film) saves some of that power from draining away completely, an actor can only do so much repair work after the director has announced to the world that he doesn't care about his characters.

Shock, as a means to an end, and developed organically in the story, is perfectly fine by me. But shock as the point in and of itself, accompanied by a smirk, is extremely offensive to me. And its offensive as an artistic philosophy, moreso than any of the images that philosophy tries to rub my nose in. Its like telling a dead baby joke and then chastising those who couldn't "handle" it.
Posted by bill r. at 8:13 PM

Warning! You have 20 seconds to leave the theater. Danger!

Who does he think he is, William Castle?

Really interesting - glad I found your blog. You say:

"Less excusable is that it exposes Noe as someone who positively adores his own transgressions, and who seeks to shock his audiences so that he can pat himself on the back for his bravery and honesty."

What I'm wondering now is: (a) is this true of postmodernism in general, or of one strand of it at least, and/or (b) is this rather a reflection of how postmodernism looks to us now that its cultural high water mark is (arguably) past.

I'd like to know what your feelings are on what Noe tells us (if anything) about the current state of postmodernism.

Krauthammer - I bet he had Castle in mind when he made the choice.

Alan - First, thanks for stopping by. Second, I'm not sure I'm fully equipped to answer your question, as I'm no expert on postmodernism, but I would say to this:

is this true of postmodernism in general, or of one strand of it at least...

...that yes, there is a certain strand of it -- which is exemplified by Noe and Funny Games -- that gets off on its own smugness. It has no other motive that I can see. Haneke (who, by the way, I generally like) claims to have a grander purpose in the rewind scene of that film, but I'm not sure I buy it, or, at least, it certainly didn't play that way for me.

I guess postmodernism is, almost by definition, sort of smug, but I don't mean that as a blanket criticism. But I think it's sort of the same as satire: I haven't seen a really good bit of satire on film since Dr. Strangelove (well, okay, and Team America and South Park). Satire has become the genre for those who are in love with themselves, and postmodernism is generally employed by those who probably don't even know why they're using it.

That's not much of an answer, I know, but, well, it's early.

I don't think postmodernism is something you "employ;" post-modernity is an era which many cultural historians think we are entering. As such, post-modern works exhibit certain characteristics -- irony, nihilism and, yes, a certain moralistic relativity. They are also steeped in a disrespect for authority, whether of God or government or even the author of a given work of art.

Post-modern artifacts can indeed be smug, but no more so than modernist works which tend to assume an unlimited progression -- brought about by science and technology, natch -- toward a bright future for humankind.

Which modernist works of art are you thinking of, Rick, which "assume an unlimited progression -- brought about by science and technology, natch -- toward a bright future for humankind"? Outside of futurism, I mean. Surely the modernist heavyweights - Joyce, Kafka, Proust, Picasso, Woolf, Stravinsky, Ibsen, Faulkner, Munch - are closer to "irony, nihilism, disrespect for authority, moralistic relativity" you attribute to postmodernism?

Postmodernism, as I've always understood it (and my understanding of it is less than thorough, as you may have gathered) has as its primary feature a self-consciousness. A postmodern film or novel is very aware of itself as a piece of fiction, or artifice. There's more to it than that, of course, because often there is -- or at least let's hope there is -- a reason behind it. I don't know about the whole "nihilism" thing, in either modernism or postmodernism. Joyce wasn't really a nihilist, was he? On the postmodern is, I would say that (perhaps somewhat ironically, all things considered) neither was David Foster Wallace.

I haven't yet read David Foster Wallace - he's less celebrated here in the UK than in the US, I think, and at my age I'm wary of 1000 page novels... And now I've been told by a friend that until I've read House of Leaves I can't comment on anything, so I'm off to Border's.

I felt that those 4 qualities could be applied selectively to those modernist artists and writers - ie, Joyce wasn't nihilist but he was the other 3, Munch wasn't ironic but was the other 3, etc.

Anyway, I've written a book what seems to me the death and the aftermath of postmodernism, called "Digimodernism". It's out in August. Noe is part of the last phase of PoMo, it seems to me.

First of all, pardon all of the typos in my last comment.

Second, I've only read one Wallace book, and it wasn't Infinite Jest. It was Brief Interviews with Hideous Men, and it was aggressively postmodern, and maybe pessimistic (at times, it certainly was), but not in the least nihilistic. You should give it a look, Alan.

Anyway, it seems to me that those four qualities could be applied, selectively or otherwise, to just about any artistic movement you care to name. It all depends on the artist, doesn't it? That may be why when I think of postmodernism, the only thing I'm able to latch on to, for a definition, is "deliberate self-consciousness".

And if you've written a whole book on the subject, can I assume that you've seen I Stand Alone? And if so, what did you think of it?

I guess Noe is one of this generation's essentials... but I can't deny, I'm scared. I don't like to judge these things before-hand but he does not seem like my kind of film maker. I've heard nothing that made me want to sit through Irreversible, and the stunt you say he pulled at the end of this one doesn't exactly make me more interested in him as a director.

Have you seen anything else of his?

"Satire has become the genre for those who are in love with themselves..."...

Agreed. Or, at least I agree as far as "bad satire" goes, which makes up most of the satirical attempts these days.

Artists describe their work as "satire" like pundits label politicians "Nazis" or "fascists". The word has almost lost its meaning because many who uses it don't know what it means anymore.

Irreversible is just as taunting. I remember when I went to go see it, the theater had a sign outside that said "If you suffer from seizures please be warned!" and "ONLY 18 AND UP ADMITTED!". It was like the theater had decided to play along with Noe's freakshow.

There are elements to Irreversible that I like. Truly. But then objectionable moments make you wanna spend time defending Noe and his movie. I would like to see it again though (contradictory as that sounds), b/c I've always felt incomplete in my opinion of it.

oops... I meant, "objectionable moments make you wanna NOT spend time defending Noe and his movie."

Which modernist works of art are you thinking of, Rick, which "assume an unlimited progression -- brought about by science and technology, natch -- toward a bright future for humankind"

This is a good point, I think there's a difference between post-modernism when used in terms of art history and post-modernism in terms of philosophy. Post-modern philosophy definitely challenges modernist thinkers about the progressive view of history. But dada did that quite explicitly as well, in the 1920s.

Sorry I missed this discussion and then discovered just before having to go offline. Most of my experience with post-modernisim has come reading statements against it, like on Butterflies and Wheels, a website I go to often but never mention because it would most likely offend almost everyone in one way or another. I like it because it regularly features writers who eviscerate what the site calls "wooley thinking" which mainly concerns things in line with PC, Nanny-State-ism, Post-Modernism, and so on.

Outside of that I don't have a great deal to say about it either but if I had more time I'd search on some articles there and maybe throw in a link or two.

Ryan, I don't think Noe is "essential". He's worth seeing, I guess, but "essential" is really stretching it.

I've seen Irreversible, and my take on it is pretty much in line with Fox's. Belucci is great, and the story carries a natural power through the way it's told, but I find much of this shock cinema to be fairly juvenile, at least in the importance it places on shock. By and large, I think Haneke treads a very fine line quite successfully. I don't think Noe is half as skilled.

And I don't even know what Krauthammer is talking about.

I'm trying to start a movement called Post-Modemism. It would argue for a society where we don't have modems.

That would be about it...