It's a sad truth about humanity that each of us who can claim membership to that reasonably noble species occasionally spends too much of our time angrily disagreeing about things like politics and board game rules. Being among the finer examples of the race we know as "human", I can often be found, at my paper-strewn desk, or in front of giant blackboard on which I have been feverishly scribbling, trying to find new ways to connect people to each other so that we can forge strong social bonds and march forward, together, into a new world free of strife and anger and violence. And -- good news! -- I have found another patch of common ground on which to toil, because I think there's one thing we can all agree on: sometimes, movies are based on books.

With that fact in mind, I have decided to carefully construct a new series of thought-pieces (or "blog posts") that will revolve around cases in which the book upon which a particular film has been based has been sadly ground into the dirt along the March of Time, while the film goes on to everlasting fame and glory. Or, if you will, the book has been "overshadowed" by the film.

So, in the coming weeks and months, I will be reading some of these books, watching or re-watching the films, and then pouring my heart, soul, and other things too, probably, into writing about my experience. The idea of comparing books to their film adaptations is obviously in no way a new one (Jonathan and Marilyn, to name but two, have already been doing this), but I think my focus is narrow enough to be considered kind of original, and plus you have the whole "building social bonds" and "global bliss" thing that I'm also trying to cram in there.

If you are one of the three people who might have read my previous post (before Marilyn stole the Internet), you may recall that I mentioned something about my Devoted Legion following along with this project -- in other words, reading along with me in order to better take part in the discussion. You should all, indeed, feel free to do so, but this isn't actually a book or movie club, so don't feel obligated. I guess what I'm saying is, if you hate peace, then don't bother. If, on the other hand, your heart beats human blood and your soul has not baked to a cinder, here is a short list of the first few books/films I plan on tackling:

Monkey Planet (AKA Planet of the Apes) by Pierre Boulle 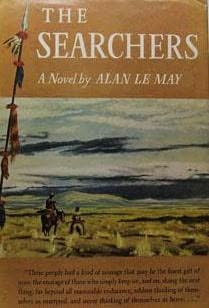 The Searchers by Alan Le May

The Hustler by Walter Tevis

And I'm open to suggestions. I have others planned, like Cool Hand Luke and The Verdict, but I'd want to spread out the Paul Newman stuff as much as I can, so anything else you might like me to read/watch, please drop a comment in my Comment Box, won't you? And let's stick to obscure, nearly forgotten books. I think it's safe to say that, for instance, Gone With the Wind is better known as a film than as a book at this point, but only because people don't read anymore. As far as books go, that one is still pretty famous.

Okay, yay, a project, and so forth! The first post, which will be about Planet of the Apes, will go up within the next week or two. After that, who knows? I'll get to it when I get to it, but I'll announce it as early as I can, for those who want a head's up.

Labels: Books, Films, Overshadowed, Planet of the Apes, Projects, The Hustler, The Searchers

'...and plus you have the whole "building social bonds" and "global bliss" thing that I'm also trying to cram in there.'

Are you implying that Jonathan and Marilyn prefer social chaos and global anarchy?!?!

Are you implying that Jonathan and Marilyn prefer social chaos and global anarchy?!?!

Anyway, thanks, Fox. I'm not going to burn myself out with this one, like I did with that whole horror thing, but it should still be fun. And hey, you could read along! All the books chosen so far should be pretty easy to come by -- and for cheap, too!

I'm looking forward to this, as it's a topic that greatly and repeatedly draws my interest. (I even have a long-simmering draft of a post comparing Evelyn Waugh's "Vile Bodies" and the film version "Bright Young Things" - someday I WILL finish it!) But, in the meantime, I'm looking forward to your insights, especially on "Planet of the Apes."

Thanks, Pat. I'm hoping the Planet of the Apes is going to be an easy-ish way to kick things off, since I won't feel like I need to be too serious about it, but I've been proven wrong before.

I've never read Vile Bodies, or seen that film, but I have read some Waugh (A Handful of Dust must be, in some ways, one of the strangest books I've ever read), and I like him. I take it that's a good book? How about the film?

Actually, I like the film a lot better than the book - I have a really hard time getting interested in the book and staying with it. (And in fact, have never finished reading it - which is something I obviously want to do before completing mypost.)

The film version is much more compassionate towards some of the more ridiculous characters, and the ending is significantly different.

and the ending is significantly different

But...you said you haven't finished it! Did you skip ahead!? YOU MUSTN'T DO THAT!!

If you like anything about Waugh's writing, I recommend the aforementioned A Handful of Dust and The Loved One.

"Handful of Dust" is my favorite Waugh novel. I've never got around to "The Loved One," although I keep meaning to.

You can knock The Loved One out in a day or so, and it's very funny and bracingly dark.

Oh, and I didn't skip ahead in reading "Vile Bodies" - some damn reviewer gave it away in an article shortly after the film was released!

That son of a bitch!

I'm afraid so, Rick. But he was English, so what do you want? They probably name boys "Marjorie" over there.

Or Frida. I always wanted to be named Frida. Ah, to be English ...

Rick, when you turn 18, you can change your name to Frida.

"If you hate peace, then don't bother."

BTW, I really disliked Bright Young Things. Like, a lot.

So Marilyn hates peace. Why am I not surprised?

Wasn't Bright Young Things written and directed by Stephen Fry? I like him, and would think he could make a decent film. Maybe I'll read Vile Bodies soon, and check out the film (not for this series, though).

So it's up to me if the film's any good? I may side with Pat, just out of spite, since you recently dropped me, Marilyn.

But you had a soft landing, Bill, dearest.

Oh I did, did I? Well, I don't know why you think you know so much. Men have feelings, Marilyn. Men have hearts. Hearts that break.

"I'm sorry, Marilyn, were you talking to me?"

And then Marilyn commented:

[Marilyn swoons from all the cocktails she had to drink to bear the sight of the kind of face she hates.]

And then it went downhill from there. I can't remember all of it because I was busy licking the dirt off of Marilyn's shoes just like she ordered me to.

But he loves Pizza!

what a great series!

How about reading "From Here to Eternity" by James Jones.

or Sabrina, The Bridge over the River Kwai, Mary Poppins, The Graduate, The Exorcist, or All The President's Men...

or Schindler's List even (novel by Thomas Keneally...no one ever thinks of him when they think of Schindler's list)

Those are some great ideas, RC. I would say that a few (The Exorcist, From Here to Eternity, All the President's Men) are too well known, but The Graduate is perfect, and it was staring me in the face the whole time. Can't believe I didn't think of it.

I love the idea of Schindler's Ark, too. I would have to bend my rules slightly, since it won the Booker prize, but you're right, no one thinks of Kenneally in relation to the film, and he's also one of those respected, prize-winning writers who no one seems to actually read. So I'm going to do that one, too.

I'm also going to do Night and the City (novel by Gerald Kersh) and Night of the Hunter (novel by Davis Grubb).

I watched an interview once with Tom Wolfe and he was asked about his books being made into movies (and please if there's a transcript of this interview online you should use it for an intro or just take my paraphrasing from here - I mean if you want to, I'm not trying to be presumptious).

Anyway, the interviewer asked him if he was bothered by well-received books like Bonfire of the Vanities being made into laughable duds like the Tom Hanks movie? Did it bother him that they had screwed it up so bad?

Not at all he said. Wolfe said he loved it when that happens because the book remains front and center and continues to sell. What he couldn't stand was a faithful, well-executed, well-directed movie made from one of his books. Ever since The Right Stuff came out, he said, sales for the book died and have never recovered. People just watch the movie now.

It was interesting. The interviewer was expecting the exact opposite reaction. An artist's rage over their work being ruined but Wolfe gave a businessman's reaction instead: Good movies ruin my book sales.

Does that mean Wolfe is a businessman and not an artist?

Wow, that's interesting. I have never heard that answer before. I have heard several writers steal Raymond Chandler's famous answer, when he was asked if he was upset when Hollywood ruins one of his books -- he said his books haven't been ruined, they're right there on the shelf. But I've never heard a writer claim he was happy when that happened.

Still, Wolfe makes sense. I've never read The Right Stuff, but I've seen the film many times, and if my brain was working at the moment I'm sure I could point to dozens of other examples like it. (well, actually, see the list I've put together so far for more).

Although, I would think that, if someone saw the catastrophe that is Bonfire of the Vanities without having read Wolfe's novel, they would hardly then be more interested in reading the book. Maybe the sales of that book stayed high because it was a legitimate publishing phenomenon...that sucker was huge. AND it's a great book.

Marilyn - Writers love to get paid. All of them.

Does that mean Wolfe is a businessman and not an artist?

I leave that up to the reader. But one can certainly be both.

By the way, I've been searching and can't find it. It was A & E, possibly. I have no recall of who the interviewer was.

Believe it or not, I actually did read Bonfire of the Vanities after seeing the film first. I thought the film was pretty entertaining, and didn't understand all the criticism - till I read the book.

I've read the book at least one more time since, but I'v never bothered myself to see the movie again.