First of all, the internet sucks. Until I break down and by whatever the technology it is that allows me to take images from a DVD and post them on my blog, the internet is so supposed to provide to me every image from every film, making that aforementioned technology moot, and thereby saving me a couple of dozen bucks. But the internet lets me down time and time again. This is a particular shame, because the film -- films, really -- that I wanted to talk about tonight exists and is worth seeing almost entirely because of its imagery.

The film is Tarsem Singh's The Fall. Briefly, it tells the story of a little girl named Alexandria (Catinca Untaru) who is laid up in a Los Angeles hospital in the 1920s with a broken arm. Also there is Roy (Lee Pace), a stuntman who has been badly injured in a stunt gone awry. These two strike up a friendship, and Roy begins telling her a story about five heroes and their quest for revenge against a man named Governer Odious. Alexandria becomes entranced by this story, and the more she becomes involved, the more willing she is to do favors for Roy, such as stealing morphine from the hospital's pharmacy.
Naturally, director and co-writer Tarsem Singh visualizes the story Roy is telling, and that's when we get shots like this: 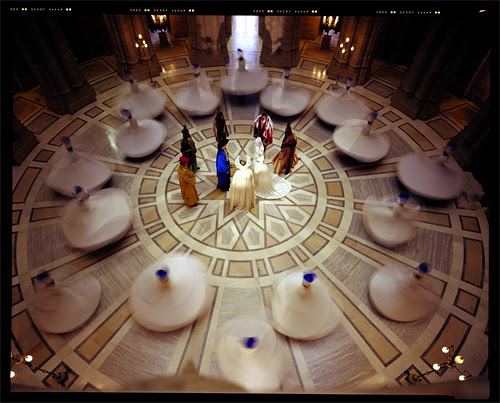 ...and so on (that's about the extent of the variety of images from the film offered by the internet). It's absolutely stunning how strange and beautiful this film is, even in its throwaway moments. I haven't seen this confirmed, but throughout The Fall's running time, I kept thinking that Singh must have been deeply influence by Terry Gilliam, and that this is the kind of film Terry Gilliam still wishes he could make (and I think I mean "could" in all senses, but I'm more than willing to give Gilliam's upcoming The Imaginarium of Dr. Parnassus a fair shake).

The Gilliam film The Fall most resembles is The Adventures of Baron Munchausen, and like that film, Singh's film is flawed. And the flaws in both films are quite similar, and largely boil down to a level of whimsy and ill-advised humor in the fantasy sequences that threaten to sink the entire enterprise. But both films, in my opinion, overcome this, and The Fall adds a bracing darkness to its latter sections, which nevertheless at no point remove it from the category of "children's film", which, in truth, is what The Fall is. I think kids -- of which I own zero -- will love this thing. If you do have kids, by the way, The Fall is inexplicably rated R. I'm really at a loss to explain why. Yes, there is violence, and some themes that I guess would be regarded as "adult", but by this criteria, the Lord of the Rings films should have been rated X.

Singh, in case you're not aware, also directed the Jennifer Lopez vehicle The Cell. This movie was widely slammed by critics, and was a commercial flop, a fact which no doubt has a lot to do with the fact that Singh has made no other films until The Fall. If you haven't seen The Cell, you may very well be sneering at the name "Jennifer Lopez", and while I'll admit she's miscast, she's by no means terrible, and besides which...

I like The Cell, and I've never understood the vitriol directed towards it. Roger Ebert's lonely rave review may be a bit over the top, but it comes closer to describing the film I saw than any other review I've read.

In both The Cell and The Fall, these images are literally fantastic, in that even within their respective films, they're not "real" -- in The Cell, they all appear in the mind of a comatose serial killer, and in The Fall they're the visualization of Roy's story, filtered through the mind of little Alexandria. And, honestly, my own preference is that Singh apply his formidable imagination to a story that is a straight fantasy or horror story, where his images actually exist in the same world as his characters. That, however, is a minor quibble. Everybody bitches about modern special effects, and CGI, and how the art of in-camera effects is dying, and I'm right there with those people (the last fight scene in The Incredible Hulk looked like a video game cut scene). But there are a couple of people who do the hard work of making the fantastic look both gorgeous and real, and Tarsem Singh is one of them. He deserves an audience for that reason alone.

PS - Just a quick word about Catinca Untaru. Her performance in The Fall must be the most charming and deeply believable child performance I've ever seen. And she plays Alexandria as a child. I think Haley Joel Osment's work in A.I. is pretty amazing, but he's obviously not playing a real kid. Untaru is, and she's just incredible. Credit must also be given to Lee Pace, who not only turns in a very good performance, by any definition, of his own, but the vast majority of his scenes are with Untaru, and from what I heard of the DVD commentary, his work in the film involved a lot of improvisation with Untaru, who is not only a child (I'm guessing that, during filming, she was about six years old), but English isn't her first language. So Pace went above and beyond, and it worked incredibly well.

Hey. I just saw "The Fall" a couple of days ago and I was blown away, like you, by the imagery. And you're right: Catinca Untaru is fabulous.

Do you have a DVD player in your computer? If so, you can grab the images easily enough with Prnt Scrn, and then use an image editor to cut it down to size. (sorry if you already know this ...)

Bill, I think Lopez was very good in Out of Sight before she became the "joke" she is today. I put that in quotes because I think she is unfairly maligned due to her glitzy and embarrassing pop career. But as an actress, I don't think she's half bad.

I've now seen images of this film on Scanners, Coosa Creek and here and I'm going to put this one near the top of the queue, it looks spectacular.

As for the pics, I've noticed your pics are direct links from other sites, which means they do not always get sized correctly when pulled in (blogger resizes them and doesn't care what gets cut off or not and if the site you pulled them from drops them they get lost on your site as well). I save the pics I like to my hard drive then load them up to blogger. After that you can delete them from your hard drive if you want (or not, it doesn't take up much storage space) and they will forever remain on your blog. Also, if you want to grab clips from DVDs just download the old Windows media player for free which allows you to do that if your computer DVD player won't. When I'm back home again I can give you the exact version you need to download for this.

Rick, have you posted about this movie yet? If so, I missed your post.

Jonathan, you really should see The Fall. The fact that Singh is making movies that look like this, and basically being ignored for his efforts, is kind of infuriating.

As for the pictures, and DVD images, and all that...I didn't know any of the things either of you told me. I'm pretty much flying blind here, and have been from the beginning, so thanks for the tips. I don't have a DVD player in my computer, but the rest of it should help.

I reviewed this film a while ago, and got a chance to be part of a long Q&A with Tarsem. It still blows me away that there is absolutely NO CGI in this film. And yes, I too think its a shame it got an "R" rating. There is no justification for it.

Marilyn, I didn't know there was NO CGI. I never noticed any, but I just assumed there must have been a little, at least (there is some in The Cell). That is amazing.

I missed your post, so I'll have to go back and check it out.

And I had no idea there was no CGI, that's amazing.

I think I agree with you on this movie. It sounds like you liked it a little more than I - and I did like it... I find the final sequence especially moving - but there was something juvenile about the story/script that kinda weighed on me after a while.

No doubt Tarsem has an eye and a patience for production design (Marilyn's right about there being very little CGI. I think it took him 8 years to film this b/c he filmed it in 18 or so locations), but something felt lacking to me. Even, sometimes, the gorgeous-ness of the imagery lacked some emotional language I was hoping for.

p.s. My word for the "word verification" right now is PANTS.

I don't really disagree with you, Fox, but the flaws were eventually overwhelmed by everything else. That last section you pointed to pushed the movie over the top for me, and after that I was unable to really focus on the drawbacks. Besides, a certain level juvenilia is to be expected: she's six!

BTW... what is the software that lets you grab images from DVDs? I'm always jealous of the job Arbo does with his movie grabs and I don't know how he does it.

Fox - Do you know something I don't about the CGI? Tarsem said there wasn't any.

Oh, no, I just thought I saw a little of it in a few scenes... like the one where the native has the map sketches on him, that seemed to be enhanced by CGI. But I could be wrong.

There was another scene too, where something was crawling underneath someone's skin??? (maybe I'm getting that wrong).

But yeah, I mean the amazing landscape shots are all CGI-free as far as I know.

Fox, I think you must be right about CGI in those two scenes. I remember now that I thought they were CGI at the time.

It has been too long since I saw the film to remember it. I was so sure that the troops running on the zigzag staircase was CGI, but those are real structures (water wells) filled with extras who were cheaper than CGI.

Marilyn's site. That's where I saw it, not Rick's. Stupid me. Fox and Bill, as soon as I'm back home I'll send you both the software for screengrabs. It's freely available online. Just don't start doing multiple banners - cause that's my turf!