These Are the Capsule Reviews of October

One of these is positive! 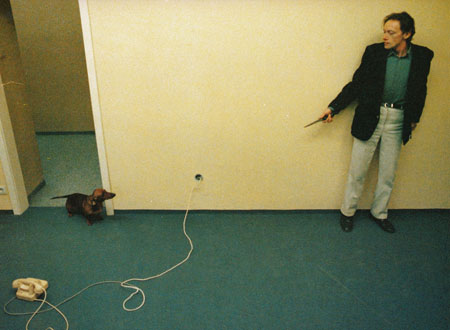 Angst (d. Gerard Kargl) - I learned of this Austrian nightmare only recently (that it doesn't find a spot even in the updated edition of Kim Newman's Nightmare Movies seems significant in some way), but I can say that it is the film I was told it was. Somewhat put off by the fact that this is evidently Gaspar Noe's favorite film, Noe being a filmmaker I do not admire, it was therefore interesting that I could not only see where the Argentinian filmmaker has repeatedly drawn inspiration, and where Kargl has beat him at the game Noe's been trying to play for years now.

But enough about Noe. And what else to say about Angst? It's not a plot-heavy film. Loosely based on the murders committed by serial killer Werner Kniesek, Angst tells the story, in close to real time, of a convicted killer (Erwin Leder) who, upon being released from prison, immediately goes searching for his next victim. After an aborted attempt on a female cab driver, the killer flees into the woods. He eventually finds a house, which draws him not necessarily because it implies human inhabitants for him to kill, but because it at first seems deserted, and may be abandoned, and may be his new home, or dungeon. But it is inhabited: by an elderly woman, her paraplegic, mentally handicapped son, and her daughter. They come home while the killer is there.

Angst is, as you might imagine, a very difficult film to watch, but it isn't a 90-minute violent assault as I'd feared it would be. The violence is concentrated within maybe about 20 minutes (long enough, I can hear you protest) and the rest is made up of the lead-up to, and the aftermath of, that violence. Otherwise, Kargl plugs us directly into the killer's head. Though not a silent film, the vast majority of the spoken words heard in Angst are the killer's narration, which is persistent, and which sometimes overlays the slaughter. He tells us about his life, his childhood, and his desire to kill others. Another way Kargl makes us live in the killer's brain is by, whenever the killer is running, or overwhelmed by the fact that he lives in this world, hooking a device to Leder's body on which the camera is attached so that effectively the camera is not only swiveling around Leder, but up and down his body so that I, at least, wondered how it worked. This did not have the effect of booting me from the film, but rather left me feeling some of the disorientation the Leder's killer is meant to feel. Which, further, is not meant to imply that Angst is making excuses for serial killers, or pitying those who carry out such acts. The three murders in the film are feverish (the one on which I believe the film's reputation as a work of shock cinema rests feels endless) and could only have been carried out by someone whose head feels like this. 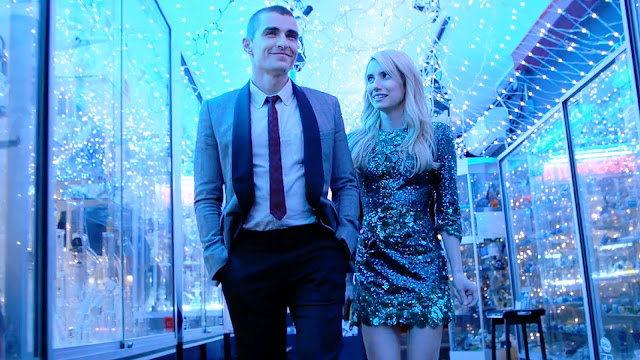 Nerve (d. Henry Joost and Ariel Shulman) - Oh, this fucking thing. Embraced by many as a film that is better, and more fun, than you'd imagine, this 2016 film by the two dinks behind the fraudulent documentary Catfish, is pretty infuriating. I will go so far as to tempt the wrath of a certain corner of the internet by saying that the film's roots as a young adult novel are betrayed by the fact that Nerve the film is thoroughly chickenshit.

For a while, though, it's more fun than you'd think! Starring the very well-cast Emma Roberts and Dave Franco as two participants in the titular social media game, which requires its participants to fulfill a series of increasingly dangerous dares in order to gather online followers leading to some sort of championship round, two participants, I say again, who stumble across each other in New York City while just getting started on the game. Franco's Ian, it is suggested, has done this before ("Nerve" is an annual game), whereas Roberts's Vee has definitely not, she being kind of a "square" who is looking for "adventure" and "life" that might match that which is enjoyed by her fame-hungry friend and fellow "Nerve"-participant Sydney (Emily Meade). So anyway, you get the idea, and the film is fun for a while, not only because Roberts and Franco are both so appealing, but also because Nerve continues to behave as though it will become even more fun, and more interesting.

Eventually, however, the deep stupidity of the film begins to reveal itself. For example, throughout Nerve, the game is described as something deeply secretive, part of the "dark web" that only teens know about, and that no one who knows about the game should ever say anything about it to any authority figures. But then the climax takes place in a wildly crowded, neon-lit ancient stadium located in....what, Brooklyn? This is simply one example of Nerve telling the audience one thing is true and important while playing out in the opposite way. Not purposely, to achieve something or other, but because it doesn't really want to be the thing it's pretending to be. See also the fact that none of the dares ever challenge the morals of the contestants; at least not our heroes. At one point it looks like they'll have to commit theft in order to advance in the game, but in fact they don't have to. They're called upon to be reckless, but never to go against their own character. For all its nefarious shadow-world window-dressing, all Nerve is really saying is "You're fine, and everything is fine." Lights Out (d. David F. Sandberg) - Oh, this fucking thing. In 2013, a short horror film called Lights Out was released online that inexplicably excited and terrified lots of people. Lasting only a few minutes (not the problem), it relies on one good idea that can only work once, but requires it to work several times in a row. That idea being, someone in their own home turns off a light in the hallway. In the shadows left behind is a frightening silhouette of someone or something that hadn't been there when the lights were on. Flip the lights back on? It's gone. Turn the lights off again? Now it's closer. Those actions as I've just described make sense to me. Someone flipping that light off and on so that the audience can watch the ghostly figure advance four or five times is just stupid, but that was the short film Lights Out (by the way, the upshot of the thing was that the scary thing had a scary face).

How might one stretch this into a feature-length film? Well. Because the short only had one idea (in fairness, films that short only have room for one), director David F. Sandberg realized that the way to step up to the plate for his feature debut was to add a whole other idea, that idea being that the ghost-thing from the short used to be a girl who was allergic to sunlight. There's little else here. The film stars Teresa Palmer as Rebecca, a troubled young woman whose young brother Martin (Gabriel Bateman) still lives with their mother (Maria Bello, the best thing about the film), even though she, the mother, seems mentally unstable given her life-long belief in a terrifying shadow presence she calls "Diana." Rebecca has never believed in Diana, though Martin sees her too, and then one day Rebecca sees her. So then Rebecca's like "Well okay, let me see if I can dig up any evidence that this 'Diana' person ever even existed.'" Within about six minutes of searching her childhood home, Rebecca finds enough written, audio, and visual evidence to explain the whole thing. After that, it's just a matter of running out the clock.

By the way, the film opens with Martin's dad (Rebecca's step-dad) being killed by Diana. This sequence lays out the entire visual architecture of the film's horror sequences. If you've watched the first ten minutes of this movie (or, indeed, its earlier, much shorter version), you will not be surprised by anything after that. And like It Follows, Lights Out is eager to establish its rules but is less eager to follow them, so that one early scare moment requires a light source that should mean that Diana is invisible. Oh well! You can put only so much thought into your debut feature.

There's one really eerie moment in the film. I thought it was a fairly impressive idea that relied on the audience to put two-and-two together. I'm not sure how it wound up in the final cut.
Posted by bill r. at 7:35 PM