The Capsule Reviews of October: Part 2

I'll try to do the other new films I watched this week tomorrow. I'm just too tired, you guys.

Grizzly (d, William Girdler) - What can one say about this film, one of the most infamous and egregious Jaws rip-offs, that it doesn't already sort of say about itself while you're watching it? Directed by William Girdler, who would die just two years later in a helicopter crash at the age of thirty, after completing Manitou, one of the weirdest ostensibly mainstream horror films you'll find, Grizzly wears its thieving nature on its sleeve: it stars Christopher George as a park ranger named Michael Kelly who wants his forest shut off to the public until he can catch the apparently 15-foot-tall grizzly bear that recently killed a couple of bathers...er, campers. Attempts to thwart these safety measures come from the park supervisor (Joe Dorsey), who knows that camping means big money. A frustrated Kelly gets help from Allison Corwin, the woman he's courting (Joan McCall) and his employees, as well as from his old buddy, an eccentric naturalist named Arthur Scott (Richard Jaeckel) and Don Stober (Andrew Prine), a helicopter pilot.

So Kelly is Chief Brody, except this time around he's kind of a dick. He's patronizing, condescending, and sarcastic, without the one possible upside of actually being any funny at all. He also seems to suck at his job. After a third person is killed by the bear, Kelly, who we've seen find dead bodies and fret about it, fumes to Allison "There's something I'm not doing!" You mean anything? And if Kelly is Brody, then Scott is both Quint and Hooper -- he has the reckless unpredictability of Quint and the scientific know-how of Hooper, and the oddly prolonged-into-anticlimax fate of, I don't know, somebody in Jaws 2 probably. Which leaves the helicopter pilot to be Hooper again, but a helicopter pilot this time around.

Grizzly is full of stupid shit and clumsiness -- at one point the bear swings his paw savagely at a victim (for a while, the paw is all we see of the animal) in a way, and at a height, that suggests the next thing we see will be a fake head spinning through the air. But instead we see...an arm? The bear knocked somebody's arm off? And later, one of Kelly's park ranger employees, a woman, decides to take a break from looking for a giant killer bear and strip down to her underwear and stand under a waterfall, rubbing water all over her arms, as bathing women in movies so often do. But all I could think about was she didn't bring a towel. She just took off her uniform and piled it in the grass. When she's done bathing, she'll have no way to dry off. What was she planning to do, just put her clothes back on over her soaking wet body??? That is nonsense. In the end, it turned out not to matter, though, because while she was bathing she was murdered by a bear. 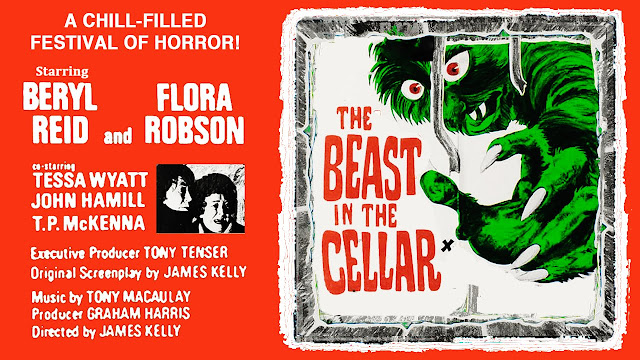 The Beast in the Cellar (d. James Kelly) - I'm not sure "festival" is the word I'd use, but this British horror film from 1970 sure is an odd one. Kelly, who like Girdler also died young, only made one more film after this, a thriller called What the Peeper Saw (I can guess!), but what reputation he has seems to rest in this story of a series of murders of soldiers stationed in rural England. Because this is a murder mystery (in theory, if not, finally, in practice) the killings have to be coyly filmed, and therefore, so the thinking apparently went, badly shot. It's all just 1970s shaky-cam, which doesn't become more interesting to watch the second, or third time.

What is interesting about The Beast in the Cellar is the focus on, and the performances by, Beryl Reid and Flora Robson, as a pair of spinster sisters whose bleak family history, and poor judgment stemming from social ignorance, has led to all this. I'm not sure why I'm being cagey about this, since the killer is obvious once you learn that the sisters have a family member imprisoned in their cellar. Bu Reid and Robson are pretty terrific (in Nightmare Movies, Kim Newman says that their commitment is wasted; maybe, maybe not, who can say), and they make the frankly dull murder stuff acceptable because the main business with the sisters is so off-kilter. Ultimately it brought to mind, a bit anyway, another 70s British horror film, Gary Sherman's (an American, but still) Raw Meat, aka Deathline from two years later. Sherman is more of a filmmaker than Kelly was, though. As engaging as the off-beat mood of The Beast in the Cellar can be, it nevertheless dumps the entire plot and motivation behind everything in one monologue that lasts a full fifteen minutes. Cutting that with brief flashbacks and other shit like that can't change the fact that this was probably the worst way to give the audience information possible.