The Further Capsule Reviews of October

I know that last week I said I was going to write about two other films a day or two after my post about Grizzly and The Beast in the Cellar. Clearly I never did that. Those two films were Paul Feig's Ghostbusters and Christopher Guest's Mascots. All I can tell you is, I simply didn't have it in me to write about two comedies. That's hard to do. For the record, I didn't much like Ghostbusters, and I particularly didn't understand why the film chose to treat the belief in ghosts as empowering, and I really, really enjoyed Mascots, and I don't know why I'm in the minority on this. I've read some people try to explain why Mascots is bad. I remain unconvinced. 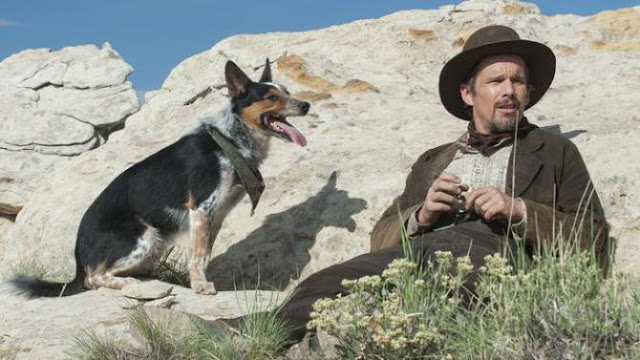 In a Valley of Violence (d. Ti West) - The first Ti West film I saw, 2009's The House of the Devil, I rather liked. I think if I watched it again today, I'd still like it (terrific Tom Noonan performances go a long way with me). It's been all downhill since then, however. I should have known, since The House of the Devil is an "80s throwback" kind of horror film, which, saints preserve us and so on. But West's much-loved follow-up, The Innkeepers, struck me as an exercise in giving the audience precisely what they expected to get, but just holding the camera on those things a lot longer than the norm, and then in 2013 he released The Sacrament, a fictionalized re-telling of the Jonestown massacre that does literally nothing inventive with it. The idea behind that film seems to have been "What if Jonestown was made up?" That The Sacrament is a found-footage film perhaps goes without saying.

Now West has "shaken" "things" "up" by making a Western. A revenge film starring Ethan Hawke as a mysterious stranger whose unwillingness to bow down to the bullies (James Ransone, Larry Fessenden, Toby Huss, and Tommy Nohilly) of a dying town leads to them leaving him for dead after witnessing the brutal killing of his dog, In a Valley of Violence has the fucking gall to knowingly wink (and may the saints preserve us from knowing winks, too) at The Good, the Bad, and the Ugly in its stylized opening credits. Which is bad enough, but the bigger problem is that West isn't even nodding at Sergio Leone -- he's nodding at Quentin Tarantino. Had Tarantino never made Django Unchained (I'm going to assume the wheels were already turning on West's film when The Hateful Eight came out), I believe In a Valley of Violence wouldn't exist. Add to all this the fact that for about the first half, this film is about as inauthentic, and as free of style, or even personality, as any Western I've ever seen in my goddamn life, and you can imagine how much blood was coming out of my ears by the hour mark. When Hawke, on his horse and with his dog, rides into the town where everything happens, he's moving his horse at a walk, all the better to cut from him looking around to shots of townsfolk sliding by as the horse progresses. This is the most beat-to-death shot in the genre, and West could not give a fuck. Plus the town is supposedly dying, but the paint looks pretty fresh, the wood pretty sturdy, and the only evidence that it's a dying town is that the budget for extras on this project had an obvious ceiling.

However, and call me a sucker (I am), bloody revenge motivated by the killing of a pet dog is going to be hard for me to not get behind, and I got behind it here (it didn't hurt that unlike in John Wick, which I liked, where the killing of the dog is sort of a metaphorical thing that must be avenged because Wick is mourning his dead wife, here the dog is important because she was a good dog). And quite honestly, the film does pick up. It becomes good for a little while. When Hawke dispatches his first victim, there is genuine savagery in the violence, and in Hawke's performance. Also, John Travolta plays the town marshal (and father of Ransone's character, who is the primary villain), and at this point his role expands. And Travolta, quite frankly, is really good here, playing the conflicted pseudo-villain (Toby Huss does that too, and is also good, but he doesn't have anywhere near the material or screentime to work with that Travolta has) who, finally, just wants peace.

But West fucks it up again. In addition to West including, in a film set in the 19th Century, dialogue like "Are you seriously bringing that up right now?", the final stretch of violence is both moronic and clumsy (at one crucial moment, West seems to have no idea where Hawke is aiming his gun) and witheringly ordinary. And the "witheringly ordinary" part is the last part. Why the fuck would you end your revenge story like that?? With that same action scene (a term I use for the sake of expediency) construction that at this point is nothing but condescending to the audience, at best. It's proof to me that West doesn't really care about what he's doing. If he has to think it up himself, if he can't simply lift it from somewhere else, it's probably not worth doing. Which is probably fair enough. 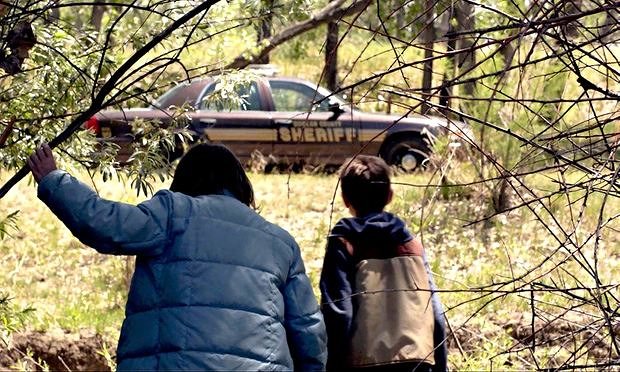 Cop Car (d. Jon Watts) - Not long before I began writing this brief review of a 2015 thriller that no one has any time for, I was shocked, even appalled, to learn that its director, Jon Watts, had previously not only directed, but even co-wrote, one of the worst films I've seen in the last two years or so. That film is Clown, a horror picture that is absolute trash, from stem to stern. This fact does slightly temper, or threaten to temper, my reasonable, grounded enthusiasm of Cop Car.

Yet reasonably and groundedly enthusiastic about Cop Car I shall remain. Before seeing it for myself, I kept hearing that it was "fine", it was just a a thriller that did thriller things, and it was honestly fine, you guys. No one seemed to want to give it any credit for being what these reactions seemed to be covertly saying it was: an effective thriller. Which, and I can say this because I watched it, it is. Cop Car is a well-shot, well-acted, modest little film about two kids (Hays Wellford and James Freedson-Jackson) out walking in the woods who find a police car, just sitting there, with keys inside. So they go for a joyride. That car is pretty important, for reasons that shall become clear, to a dishonest cop (Kevin Bacon) who then begins hunting the kids.

There's lots in this film that is goofy, or convenient. For example, while joy-riding, the kids are apparently blowing through a post-apocalyptic wasteland, because there's no one else on the road. Until Camryn Manheim, the only other driver in the world, spots them, and so she becomes an Element of Suspense. Which is fine, but by including no one else on the road, ever, she becomes a Script Thing, not a person. On the other hand, Jon Watts has a nice eye for childish behavior -- their idiot handling of the guns they find, their terror and inability to figure out how to extract themselves from the locked back-set of a police car. There are a few shots when Watts seems to want the kids to look cool, but ultimately he seems to view childhood confidence as, in hindsight, completely absurd.

It's a weird film, and interesting, and sometimes dumb. But I'll take it.
Posted by bill r. at 4:57 PM