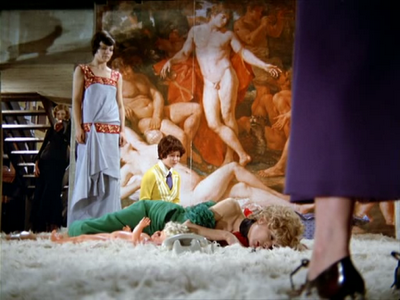 The Bitter Tears of Petra von Kant was the first film made by Rainer Werner Fassbinder that I ever saw. This was some years ago, and what I remember about my reaction was that basically it was a good movie that I would tell people I liked, should the subject ever come up, but that it was also, very plainly, Not My Kind of Thing. However I would have defined what that thing was then would be very different from how I'd define it now, because via the doorway of The Tenderness of Wolves and Why Does Herr R. Run Amok? (both of which, admittedly, are cheating) I have since become somewhat guardedly fascinated by Fassbinder's work. I say guardedly only because there's so goddamn much of it, despite his early death at age 37 (I am two years older than Fassbinder was when he died, and I have made forty fewer movies), and also there is frequently, but certainly not always, an aggressive weirdness that I, for one, kind of have to be in the mood for. Watch Satan's Brew if you don't know what I mean, although that may be an extreme example. Or not. I haven't seen everything.

Anyway, the chance to come full circle with Fassbinder has presented itself with the Criterion release of The Bitter Tears of Petra von Kant and I'll tell you, whatever my thing is now, this movie fits right in.  Adapted by Fassbinder from his own play, the entirety of the film takes place within the home of the titular Petra von Kant (Margit Carstensen), a successful fashion designer whose career, one nevertheless senses, is currently not as robust as it once was, or anyway that's how she views it, even though she doesn't want anyone else to view it that way, or to know she views it that way. She presents a facade of optimism even to her live-in assistant Marlene (Irm Hermann), though as is often the case in these situations she's probably not fooling anyone, least of all Marlene.  What will also become apparent is that Petra isn't as comfortable with her life as a currently unmarried woman -- one marriage ended in her husband's death, and the second in divorce. She talks about her ex-husband quite often, and claims that she ended the marriage much to the disbelief of Sidonie (Katrin Schaake), Petra's subtly malicious cousin. Sidonie introduces Petra to Karin (Hanna Schygulla), a young woman who Petra seduces into being both her model and her lover.

The film jumps ahead in time here, though exactly how far it's difficult to say. Initially, considering how devoted Petra has become to Karin, I thought we were at least several months along, but Petra's overall emotional fragility allows for the possibility that we've picked things up sometime next week. So Fassbinder's approach to time compression here is intriguing, even though his methods here are common in live drama. This doesn't change the fact that, unlike most films, Petra's emotional swings can't be exactly traced through what we've seen before. But even though the motivations of this fictional character aren't written in lights, as a human being Fassbinder and Carstensen's depiction of Petra is precise. Gaudy, too: in every act, Petra is wearing some new outfit the design of which is pitched at some level of insanity. The extravagance is one thing, but it's extravagance of a particularly blinkered variety. This may be like saying this soup is particularly brothy, which is also, I believe, kind of the idea.

Of course, though the bitter tears may belong to someone else, by the end of The Bitter Tears of Petra von Kant it's hard for me to not think of it as Marlene's film. As Marlene, Hermann never speaks, and most of the time she's in the background of a frame full of clutter and drawings and mannequins (this is one of the great doll and mannequin films, along with others such as Kubrick's Killer's Kiss and Soderbergh's Bubble) and of course Petra. But Fassbinder and Michael Ballhaus, his master cinematographer, know exactly when and how to pick her out of the scenery -- sometimes, to literally highlight her. Marlene loves Petra, you see, and has spent God knows how many years having her heart crushed as Petra moons over, or pursues, or catches, others. Worse, late in the film when Karin says Marlene is "screwy," Petra -- in front of Marlene -- corrects her, saying that actually Marlene "loves me." So she knows, has always known, and has the nerve to to be the one seeking pity. Twice, Marlene's feelings are expressed, and both times this is done through songs by The Platters: "Smoke Gets in Your Eyes" first, and much later "The Great Pretender." I'd say this is the best cinematic use of The Platters of all time, especially the latter one, which through shadows, a bright light, a black dress, and one character pausing significantly as they walk through a room, achieves a kind of masterpiece in miniature, one that, like the best endings, reflects back across the rest of the film.
Posted by bill r. at 9:00 PM

Great mini-review -- I discovered Fassbinder shortly before he died, in that last flowering of movies. Hope you've seen Berlin Alexanderplatz -- nothing else is like it.