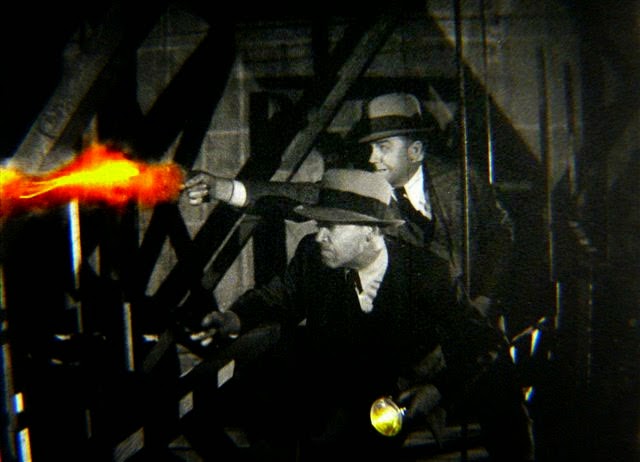 Above is an image from the 1932 Poverty Row murder mystery called The Death Kiss.  It's a black and white film, of course, however -- and no, your eyes are not deceiving you! -- some scenes contain bits of color tinting of the kind seen here. Fire, flashlight beams, smoke, the flash of a gunshot -- these are the sorts of things that director Edwin L. Marin hired artist Gustav Brock to highlight with color.  In this particular film, the choice seems a little arbitrary -- The Death Kiss is not otherwise a stylistically ambitious film -- but it's still effective, in the way William Castle's gimmicks and novelties could be.

But don't take my word for it! The film, which has long been in the public domain, has finally received a proper home video release by Kino Lorber. And judging by the wide variety of image and sound quality enjoyed by the film on this Blu-ray, Kino got there not a moment too soon. The Death Kiss hasn't received much care until now, but if you're put off by the audio/video problems you should probably understand and accept that this disc is as good as The Death Kiss is ever going to get. If you're still bothered, well, it's your loss. The Death Kiss is what some might call a "hoot," a brisk, light-hearted story about murder and low-budget filmmaking.

The film reunites three of the main actors from Tod Browning's Dracula, which had been such a big hit for Universal the year before.  Edward Van Sloan (Van Helsing in Dracula) plays Tom Avery, the director of a film called The Death Kiss. At the beginning of this film, the real one, the one directed by Edwin L. Marin, Avery is shooting the scene that will give the film, his film, the fake one, its title: a woman plants a kiss on a man leaving his hotel -- he doesn't know her, she claims to have found him irresistible, but what she was really doing was marking him as the man the gangsters outside are supposed to kill. And they open fire and he dies. However, it turns out that when the fake gangsters fire their fake guns on the movie set, somebody shot the actor (Edmund Burns) for real, killing him. Was it an accident? One might assume, and certainly that's the best-case scenario, but when the police arrive, tended to by studio manager Joseph Steiner (Bela Lugosi; I can't remember who he played in Dracula), it soon becomes clear that it was murder, with a lot of circumstantial evidence pointing towards Marcia Lane (Adrienne Ames), the actress who delivered the "death kiss" in the scene they were shooting. However, contracted screenwriter Franklyn Drew (David Manners, who played Harker in etc.) is having none of that nonsense, he knows Marcia didn't do it, so with cartoon character/studio cop Gulliver (Vince Barnett) trailing along like a puppy, he sets out to find the real murderer. Drew is kind of a smug little prick, but don't let that hold you back.

It's often said about films that people like that are of a certain age "They don't make 'em like that anymore," even though they do make 'em like that anymore, it's just that the world being different now those films will be somewhat different from their ancestors as well.  However, there actually are movies the likes of which are not made anymore. The Death Kiss is one of them (Murder in the Zoo from 1933 would be another example, but there are many).  Can you imagine a studio film, or even an independent one, making a sincere -- which is in no way meant to suggest "humorless" -- inside-Hollywood film free of meta nonsense (well, almost free, The Death Kiss does have one wink in its arsenal, and it's sort of a clever one) about the on-set murder of an actor, which proceeds to then actually be a murder mystery? Though I'm trying to make the point that the movie they don't make 'em like anymore is very specifically The Death Kiss (or Murder in the Zoo, etc.), I'm now realizing that they may not even make murder mysteries anymore. They make films that have murders in them and sometimes you may not know until near the end who the murderer is, they are something other than -- "more than" it might be claimed, but not by me -- a straightforward murder mystery. The Death Kiss is. So save the genre! See The Death Kiss!
Posted by bill r. at 7:33 PM