A Good Friend Shot Dead By I Don't Know What 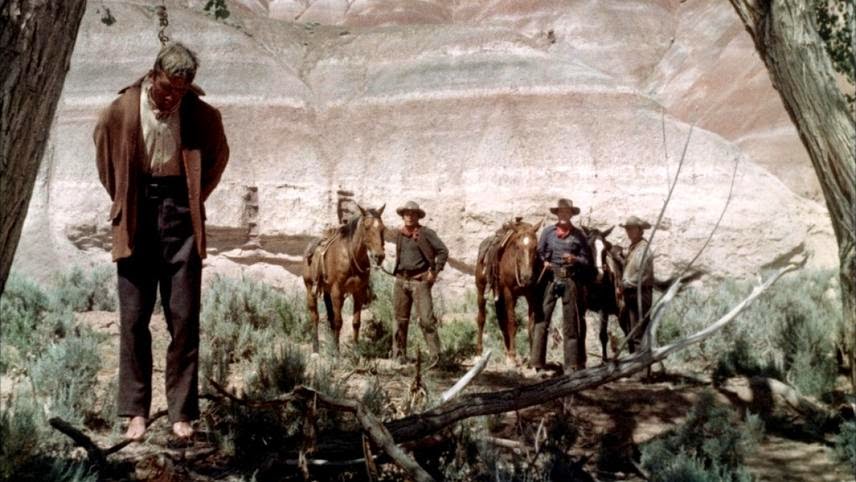 Lately it seems as though everybody's remembering that a person named Monte Hellman directed some movies that it would be in our best interest to actually watch. Outside of Criterion's release of his classic Two-Lane Blacktop in 2007 and the strongly positive reception of his intriguingly enigmatic 2010 thriller Road to Nowhere -- Hellman's first feature since his for-hire job on 1989's Silent Night, Deadly Night 3: Better Watch Out! -- the small but vital collection of films Hellman directed from 1959 (Beast from Haunted Cave, if you're wondering; I haven't seen it, maybe it's not "vital," but I'm not going to assume anything) through 1988 have not, until recently, been paid much attention. Or anyway, not enough attention. Then, earlier this year, Raro Video released on Blu-ray Hellman's "lost" film, the uncut version of his strange and wonderful 1988 island adventure Iguana (which I wrote about here). And now, just a few months later, Criterion is back in the Monte Hellman business with a two-film set of Ride in the Whirlwind and The Shooting. Hellman directed these two Westerns in 1966, aided by producer, actor, and, in the case of Ride in the Whirlwind, writer Jack Nicholson. This was not the first time Hellman and Nicholson would work together -- in fact these Westerns would be the fourth and fifth films that Hellman and Nicholson collaborated on -- but apart from Hellman doing some producing work on Head, which Nicholson co-wrote, The Shooting and Ride in the Whirlwind would mark the end, which, whatever the cause of the split, if that's even the word for it, is a damn shame. Nicholson's big breakout role in Easy Rider was still three years away, and compared to the Hellman Westerns that film is a piece of shit. Or compared to most other films, or just sitting there on its own.

Ride in the Whirlwind is one of a handful of films Nicholson wrote in the beginning of his career, and one of the interesting things about it is that while he's certainly one of the film's two leads, Nicholson's plan was clearly not to give himself a big show-boating star-making role. This is interesting, of course, when you consider how outsized his career and persona would eventually become (I'm a fan, for the record). But if Ride in the Whirlwind belongs to any one person, it belongs to Cameron Mitchell, who plays Vern, friend and fellow cowhand of Wes (Nicholson) and Otis (Tom Filer). The three of them are, essentially, going from one place to another, looking, or hoping, for work, when they stop for the night at a cabin filled with men we know, and the three cowboys deduce, to be violent outlaws. Led by Blind Dick (Harry Dean Stanton), the outlaws wonder if the cowboys are in fact part of a posse -- in any event, Wes, Vern, and Otis make plans to get out of there first thing in the morning. However, before they can the actual posse -- vigilantes, which I think is crucial -- turns up, a gunfight erupts, Otis is killed, and soon Wes and Vern are on the run, the posse assuming that they're in with the outlaws.

If all of this went down not precisely in the middle of nowhere, it's near enough; Vern and Wes have to abandon their horses to scramble up rocks, trying to evade this posse who they know will hang them. Soon they've walked about as far as they can. Wes can barely carry on. It's Wes who begins to crack first -- not grandly, but wearily. It's always a surprise and a pleasure to see Nicholson in the early stages of his career, before a single persona was stapled to him by unimaginative studios. He was subtle and quiet once, or had those as part of a full arsenal, yet his presence was always enormous. But as the film moves forward, this presence steps aside -- not completely, and not with a flourish, but room is made for Cameron Mitchell, and actor known now as something of a joke because he did a lot of not-very-good TV work, and ended up in a clutch of films that were later fodder for Mystery Science Theater 3000. And it's not as though that shouldn't have been the fate of Space Mutiny, but it shouldn't have been the fate of Cameron Mitchell, who did plenty of terrific work in movies both good and bad. In Ride the Whirlwind, when Wes and Vern end up taking shelter at the house of a farmer (George Mitchell), his wife (Catherine Squire), and their daughter Abigail (Millie Perkins who is one of the few actors in both this film and The Shooting), Nicholson's Wes begins to gain some...not confidence, but maybe energy, while Vern starts to lose his. Perhaps this is because in his attempt to evade being hanged for crimes he didn't commit, in this farmhouse he finds himself driven to actual criminal acts -- he threatens women with a gun, takes their food, plans to steal their horses. He would never hurt them, and his threats don't go beyond brandishing his weapon, but it's not something he would have ever done before this. Mitchell plays Vern's breakdown as a kind of fog, a confusion. Indeed, if there's one question that could be used as a logline for both of these films, it's "Why Is This Happening?" It's not hard to see the mistakes that led Vern and Wes to this state, but it's nevertheless absurd. Vern can't quite take that absurdity. He can't shake it off and just keep plugging along. Rather than plug along, he will go through the motions. That's all his brain can manage. 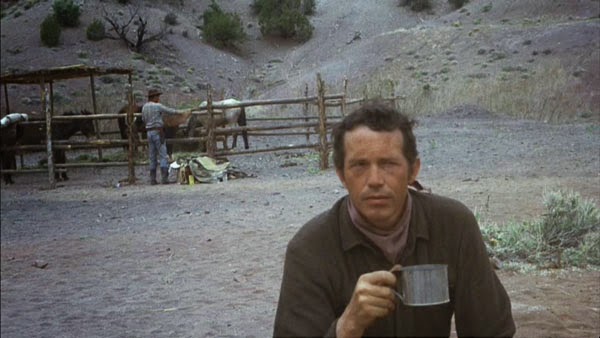 Ride in the Whirlwind is a pretty terrific movie, introducing psychic desolation into a classic Western situation and expanding that desolation by degrees. However of this pair, the masterpiece is The Shooting, a Western that plonks the desolation down early and just lets it spread out. This film wasn't written by Nicholson, who will turn up about halfway through as a gunslinger named Billy Spear, but by Carole Eastman, using one of her pseudonyms, Adrien Joyce. Eastman would later write one of Nicholson's most famous early films, Five Easy Pieces, which has never been a favorite of mine, but which the greatness of The Shooting has made me eager to revisit. If the plot of Ride in the Whirlwind was stripped down, the plot of The Shooting is barren. Warren Oates, here beginning a relationship with Hellman that would prove exceedingly fruitful for both of them, plays Willet Gashade who, upon returning to his mining camp to find catastrophe. Of the three men he'd worked the mining camp with only one, the guileless Coley (Will Hutchins), remains. One, Leland Drum, is dead, shot by Coley knows not who (or what?), though the motive is possibly connected to what drove the third man away. That third man is Coigne, Gashade's brother, who in a trip to town evidently "rode down a man and a little person," possibly killing one or the other or both. Was this little person a child? Certain subsequent events can lead the viewer to make reasonable assumptions about this, but the fact is we don't know, and the decision to leave this unclear is a slightly bizarre one. As it happens, though, it's a decision that is entirely in keeping with what The Shooting actually is. In any case, Coigne has fled, sure that he will be hunted down. This leaves just a frightened Coley and a baffled Gashade. Soon they meet a woman (Millie Perkins), never named, who wants to hire them to escort her to a town called Kingsley. The fee offered is too much to turn down, and while Gashade takes the job, Coley in tow, he distrusts the woman. For one thing, he and Coley were alerted to her presence when they heard her shoot her horse. Upon later examination, Gashade realizes the horse was perfectly healthy. Again, as with the "little person" phrasing, it's possible to eventually make sense of this, but will the explanation satisfy? The Shooting will ultimately reveal itself to be a classical Western by way of Franz Kafka, so even if the answers you apply to the film are correct, what good will they finally do anyone?

It's at times like this that I wish I'd had the foresight to have already read every book I'd ever planned to read, because in 1997 Loren D. Estleman, a crime and Western writer whose books I've read and enjoyed, though not enough of them, published a novel called Billy Gashade. Now I'll grant you that 1997 is some years beyond 1966 and so neither Eastman nor Hellman could have been influenced by it, but in the author's note with which he precedes his novel, Estleman talks about the classic folk song "Jesse James," the one with the line "He laid poor Jesse in his grave." That song was written by Billy Gashade, but despite the seemingly deathless fame of it, Estleman writes, "Ironically, almost nothing is known of the man who wrote it." Anyway, so then you have Warren Oates in The Shooting playing a man named Willet Gashade, "Willet" being a name that could quite reasonably be diminutized to "Billy." Which means what, precisely, when you consider the fact that Willet Gashade is not portrayed as remotely musical, and that even if you wanted to draw parallels between Jesse James and Nicholson's Billy Spear, which you could only do in the most general sense, the story of The Shooting plays out in a way that kind of cuts in two what few threads you were still trying to connect between the two Gashades. But I'm unable to shake the idea that somehow Estleman's novel could provide some insight into something or other because The Shooting is so unusual and so artfully inexplicable that anything seems possible. This is not to say that the film is nonsensical or incoherent or even illogical -- its last big reveal seems just as strange but is in fact just as solvable as "little person" or the shooting of the healthy horse. But none of it feels solvable, perhaps because no amount of murder or violence is ever solvable, at least not all the way to its roots. But The Shooting is weirder than that. It's obviously nothing more than coincidental that the final, eerie stretch of the film now partly evokes, for me anyway, certain episodes of the original Star Trek television show, which began production in 1966, the year The Shooting was released. The similarities are in the environment; the white rocks and dust that might represent an alien planet on TV appear in The Shooting as what they are, a landscape on Earth, but one you will only ever find yourself traveling through if your life is about to end, or has ended, or if psychologically there's nothing left. In both cases, the alien planet and the end of everything on Earth that you know, things are about to become very unfamiliar.
Posted by bill r. at 11:05 AM

Eastman would later write one of Nicholson's most famous early films, Five Easy Pieces, which has never been a favorite of mine...

It is one of mine now, but admittedly it took a while to get there. It's one that only continues to grow on me with the passage of time, to the point that I now doubt he's ever been better.