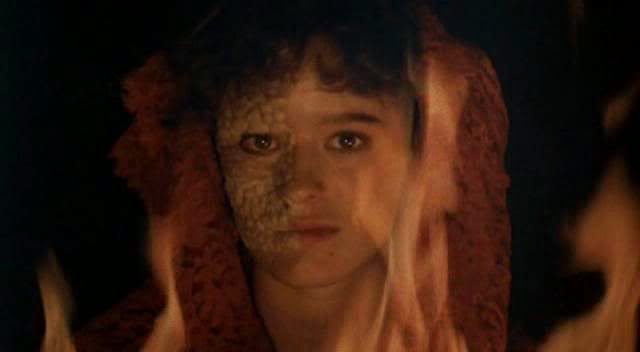 I don't want to overstate things, but to some degree 2014 is starting -- and I realize we're reaching the end of it -- to feel like The Year of Monte Hellman. First of all, he's prepping a new film (called West Memphis Three, which isn't exactly striking while the iron's hot, but whatever). Second, a couple months ago Criterion announced that this November they would be releasing a double-set of Hellman's classic '60's Westerns The Shooting and Ride in the Whirlwind. Finally, and again on the home video front, today Raro Video is releasing on Blu-ray one of the most unusual films in Hellman's already pretty unusual career, the once butchered, now restored to its full length Iguana from 1988. In an interview with Hellman conducted by Chris Alexander and included with the Raro disc, Hellman talks about how the film was re-cut by the producer after he'd turned in his final edit, and it wasn't until an Anchor Bay release many years later that anyone made an effort to restore the film. However, a mix-up led to two minutes being left out of that Anchor Bay disc, so tomorrow the full version of Iguana is going to be available for the first time. So this is like a whole big deal. I phrase that sarcastically, but mean it sincerely.

The first thing I noticed while watching Iguana the other day was Michael Madsen's name in the credits. This isn't Madsen's first movie, but it's the earliest one I've seen him in, and I immediately remembered that Hellman served as a producer on Quentin Tarantino's first film Reservoir Dogs. Tarantino is an enthusiastic and outspoken fan of Hellman, so it's not difficult to see that had it not been for Iguana, Mr. Blonde would have been played by somebody else. This is an interesting legacy for such a strange movie, about which Tarantino has said "Iguana is the movie that should have made Monte Hellman a household name." I don't know what household Tarantino is thinking about here, but I do take his point. I'm also very fond of Hellman's films, and Iguana is the kid of movie that can at the same time make you grateful that there are people still working to save this sort of fringe film from the trash heap, and frustrated that Hellman has had to struggle so much to get his movies off the ground. Before Iguana, it had been ten years since China 9, Liberty 37 his last real feature (he'd taken over for a deceased Mark Robson on Avalanche Express in the interim), and Iguana, which Hellman frequently points out he came very close to turning down, feels very much like a film that was just barely made. Set in the 19th century, it stars Everett McGill (talk about your unusual careers) as Oberlus, a hideously deformed sailor on a whaling ship. He's treated so badly by his shipmates that one night he jumps overboard and swims to a nearby island. The gist of the rest of Iguana's early action is that Oberlus, an uneducated and angry man, comes to despise humanity as a whole, as an idea, and vows to wage war on mankind. Other boats land, or wreck, on the island, and Oberlus takes prisoners, including Madsen as Sebastian, once a shipmate of Oberlus, and Carmen (Maru Valdivielso), who Oberlus rapes and keeps locked in a cave, as well as, eventually, after setting out specifically to capture him, Oberlus's old captain (Jack Taylor), towards whom Oberlus feels less than generous.

One of the main points of interest, and entertainment, for me in watching Iguana was how seemingly loose is the structure of the screenplay. The film is based on a novel by Alberto Vazquez Figueroa, and the script is by Hellman, David M. Zehr, and Steven Gaydos (who would also write the script for Hellman's Road to Nowhere twenty-two years later). I say it was "seemingly loose" partly because I use the word "seemingly" a lot, but also because I don't believe the film is as shaggy and rambling as it might initially appear. But Iguana does contain a number of what, if they appeared in a more mainstream film, we might call "set-ups," but which in this case aren't actually used to set anything up, or anyway they don't set up the things we might expect them to. For example, one of the shipwrecked men Oberlus captures can read and write. Oberlus demands that this man teach him to read and write as well, so that he might learn more about the world and put down on paper his grievances towards and dark plans for mankind. In another film, as Oberlus learns to read and write, this might set up a particular bond between the men, but not in Iguana. We're shown none of the teaching or learning process, though we gather that time has passed and that Oberlus has learned. The man is still a captive, still hates Oberlus, and still fears for his life. Oberlus promises no special treatment, and also gives none.

There's lots of that in Iguana. The violence is also interesting, in terms of who dies, when they die, sometimes how they die (there is a pretty startling decapitation, done very cleverly using low budget methods I could not quite figure out). I find this sort of thing compelling on a structural level -- you have a violent story which, after the gist is understood, could be pretty closely mapped out by a seasoned film viewer. This person will kill this person maybe halfway through, that person will kill that person at the end, and then will be killed by this person, and so on. You may not nail it, but you'll get pretty close, in most cases. But Iguana, without employing any cheap plot twists, is not easily mapped. I believe this is a natural side effect of the story. Oberlus is a man bent not just on revenge, but on genocide, and he gets nowhere with his plan. He in fact has no plan; he has a desire, but nothing close to the means, or the will, or the intelligence to even begin realizing that his dream is impossible. It's a tiny story that miserably fails to be grand, which is the idea, and the genius of Iguana. As a result, for all the high drama and death and sex (there's a rape scene, by the way, that is more troublesome than the one in Straw Dogs, but as in Peckinpah's film it would be a mistake to assume that queasy moment is the last word on the subject) that occurs in the lives of the film's handful of characters, it doesn't take on a tone of horror or swashbuckling adventure, or even the sober tone of a distanced examination of good versus evil. It quite deliberately shuffles along at the pace of the everyday. Iguana is not a boring film, but the sense of tedium everyone on the island except Oberlus must exist in, almost constantly, save when somebody is being killed, is palpable. Iguana is pathetic, in the best possible way.
Posted by bill r. at 6:36 PM

For a second there I thought this was gonna be some deservedly obscure pile of superhero crap, but it actually sounds like something I would quite like to see. Yes, indeed, might even have to shell out for a DVD somewhere down the line. Thanks for the tip.