Those Nutty Goofballs Up at the Monastery 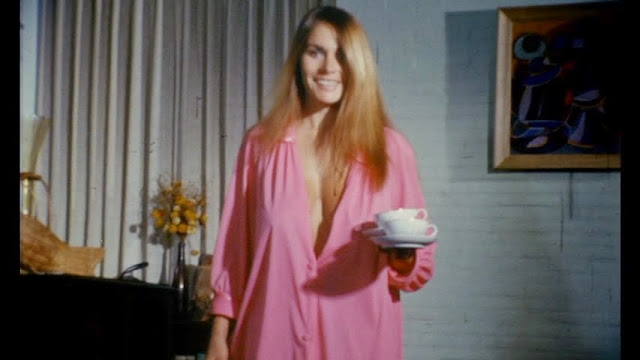 On Tuesday, through their "Redemption" line of art and/or exploitation horror titles, Kino Lorber released a little-known, essentially forgotten, if it had ever been remembered, bit of "dark erotica" called The Last Step Down. Released in 1970, The Last Step Down is the vision of director Lawrence Ramport and screenwriters Arthur Allen and Phil Miller. It could be that each of those names is a pseudonym, and, indeed, it appears that none of those men ever worked on another film again, if, I repeat, they're credited here under their real names. Both possibilities strike me as equally likely. Who would want the credit for having made The Last Step Down, and who would want to offer work to the men who made The Last Step Down?

I'm not really up on the history of the American stag film, though I'm sure it's an interesting story. I mention this only because I can't support with hard facts my gut feeling that the behind-the-camera talent who so entertained dark rooms full of cigar-smoking Oddfellows back in the '50s and '60s, chose to not make such a big public deal out of their contributions to those enticements. And I mention it also because The Last Step Down is a stag film. I don't know what else you could call it. God knows it's not a horror film. The idea must have been "Horror movies make money, somebody find some monk robes" and that's as far as their thinking took them. The film, which is 70 minutes long, begins in a kind of I guess you'd call it a church, but a Dark Church, one of those Satan churches, and in this church are our, maybe they are villains? Two guys, anyway, one of whom looks like the dockworker that all the other dockworkers absolutely can't fucking stand, and the other guy I bet probably owns a paint store. These are our Dark Monks (that's what I'm calling them anyhow, though the film offers no identities anywhere near that specific), and the first fifteen minutes of the film consist of those two guys having fairly unelaborate sex with Uschi Digard and Neola Graef. My distaste for this sequence, and other sequences like it, have little to nothing to do with either Digard or Graef, though their enthusiasm is noticeably feigned, but rather with the men, and really just the whole thing. The Last Step Down is the kind of film that can make you think that sex is maybe just gross and stupid and you shouldn't ever do it.

Ah, but then the plot kicks in. The plot is this: Digard and Graef are hookers. They like being hookers because they think that sex is so groovy. There's this new girl, played, or "played," or played? by Terri Johnson, who's about to join their whatever it is, hooker club, but she's a virgin, so they'd better break her in. First they'll break her in, then they'll take her to those loony monk guys with the robes and the wine and the dildo who they see every week. I've just described the entire plot to you. The other 65 minutes is all soft-core sex scenes, the kind that involve a lot of heads being laid on boobs and then later on stomachs. Early on, when Digard and Graef decide to have sex with each other in their living room, one of them moves a coffee table out of the way, so in this sense I suppose The Last Step Down is a procedural.

Anyway, that's it. When we get to the final group sex scene, with those two goddamn idiots in the robes again, I did still kind of think that, well, this one girl is a virgin so obviously the robed guys are going to stab her to death and drink her blood so that their Lord Satan might be once more appeased, or summoned, whichever, but no. They all have sex and the movie ends. The horror is seeing one of the guys, played by Michael Donovan O'Donnell, who you'll all no doubt remember as McGillicuddy in Warren Beatty's Dick Tracy(!), humping away, shot from an angle that symbolizes human misery in its purist form.

Interestingly, a word I use but do not really mean, on the Kino disc The Last Step Down is paired with a fifteen-minute soft-core horror short from 1979 called Blood Lust. Directed by Russell Gay, Blood Lust is set up, hilariously, as an adaptation of J. Sheridan LeFanu's story "Carmilla," which means there's lesbian sex and one of the lesbians is a vampire named Carmilla. But for whatever it's worth, Blood Lust is actually part of the horror genre -- there's blood, and, like, three people die in it, and one of the people who dies is Dracula. What more do you want, for Chrissake?
Posted by bill r. at 7:33 PM

Dear God. This sounds absolutely miserably awful and shockingly immoral and offensive in all the worst, most evilly depraved ways.

So bad indeed, that, horror of horrors, I shall have to see it for myself to confirm its sheer irredeemable awfulness, and possibly a couple of times at that, to make sure I don't miss anything. Only then can I properly express my boundless scorn for those vile wretches who perpetuate such hellish filth in the debased name of Art, and those subhuman leeches who glut themselves on such corruption.