This Is Not That Kind of Movie 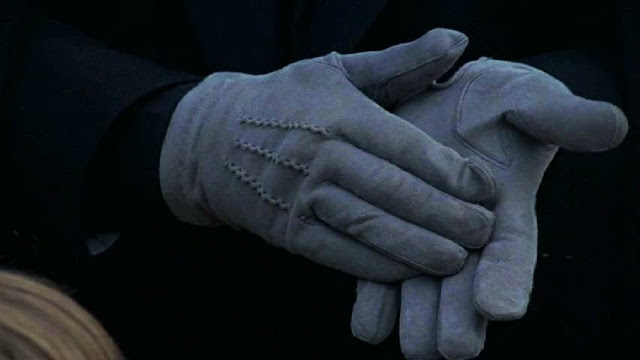 Listen, I know. The outtakes for that frozen peas commercial Orson Welles did, the one with the copy he said was "unrewarding," and he said that you can't begin a sentence with the word "In" and emphasize it, as I say, that audio is funny. And yes, I realize that by the end of his life he was pretty fat. And I know that he was doing commercials for cheap wine to pay the bills and to fund film projects he never finished. But why does nobody choose to sympathize with Welles in his later years? I mean, sure: that he finished so few movies in those years is a Real Shame. But the way he earned his living, and the life he was leading (which evidence suggests was not uneventful, but never mind), why is it only laughed at? "Because he did it to himself" seems to be the common excuse. Yet that frozen pea thing, isn't part of the reason it's so funny is the belief that, harsh though that "depths of your ignorance" bit might be, Welles is actually right? That his frustration is by no means coming from out of the blue, but is rooted in a justified despair? "Crumb, crisp coating?" In July? I wouldn't direct any living actor in Shakespeare like that either!

Oh, hello. You might be wondering what brought all this on. Well, I'll tell you. I just rewatched F for Fake, the last film that Orson Welles completed and that was released to the public (Filming Othello was finished, but outside of film festivals and special screenings has never been shown publicly or released to video). This was 1973 that F for Fake was released, three years after the frozen peas debacle and five years after his previous film, the 60-minute The Immortal Story, made for French television. His career at this point was not robust. And Orson Welles, one of the great geniuses in the history of movies, had to do a frozen peas commercial. Did he live to see those outtakes enjoy a fuller life than F for Fake did? I don't know the timeline of that, but he certainly lived long enough to see John Candy parody the commercial on SCTV. That sketch is very funny, of course, but at that time, and by the time of Welles's death in 1985, where was F for Fake? Nowhere much. It finally received a home video release ten years after he died, and wasn't reissued again until Criterion put it on DVD in 2005. That's another ten years, and now, nearly another ten years, Criterion has upgraded that release to Blu-ray. Nothing yet on any sort of bump in quality on that frozen peas business.

But how it must have stung, because F for Fake is a work of genius. A sort of mix of documentary, essay film, con job, and ode to the physical attributes of his girlfriend Oja Kodar, F for Fake is the kind of film that begins with a consideration not only of watching beautiful women in the street, but the filming of the men who do it, and even, briefly, a potential criticism of filming those men without their knowing, then moves to Welles doing sleight-of-hand magic for a young boy in a train station, then more magic with Kodar in an airport, a cameo by Laurence Harvey wearing startling sunglasses, then to footage from 1950s science fiction movies, footage of flying saucers, and then, let us not settle down at all, this is that kind of movie, jumps into what this is all sort of in aid of. Which is the art forger Elmyr de Hory, with whom Welles socialized at roughly this time in Ibiza, and the writer Clifford Irving who would initially make his name, after some time of failing to sell his fiction, with a non-fiction book about de Hory and his amazing forgeries of Picasso, Matisse, Modigliani, and so on. It's about, F for Fake is, art and expertise -- a big question in the film, a great question, such a great question that everybody has chosen to ignore it, is if de Hory's forgeries could so consistently fool the art world's top experts, what can "expertise" actually mean? What can it provide to the non-experts? Plus, while that was going on, all, again, within Welles's vast social circle, Clifford Irving decided to write a fake autobiography of Howard Hughes that he at first successfully passed off as the real thing before eventually being exposed, in no small part by Hughes himself, who came out of seclusion, or anyway his voice did, just to blow the lid off Irving's hoax.

Along the way, Welles will tell a number of stories, jokes ("First, steal an egg" is pretty solid) and anecdotes, as well as consider his own not inconsiderable experience with perpetrating (sort of) hoaxes, first when he lied on his résumé to begin his theater career (or anyway that's the way he tells it) and later, and famously, with his infamous War of the Worlds radio broadcast. All of this stuff, plus more, is put together in a mad jumble of editing that is nevertheless a jumble of precise order. It's a manic film, full of fast cutting and freeze frames, meaningless but perfect digressive shots of Irving's pet monkey. When I say F for Fake is "that kind of film" I of course mean that it is unlike any other film.

If the tail end of Welles's life and career was littered with proof that the man had lost whatever it was he'd once had, as the popular story seems to go, how then did F for Fake happen? What seems to have happened is that the films, mainly the early films, retained the respect they deserved, but the man who'd made them lost it, not through some terrible moral failing but because he was willing to do things he didn't want to do for money. And he was fat, damn him. This is the way of it, though: what's easily mocked is more quickly scooped up and displayed than the things we could not accomplish ourselves. As far as films made by has-beens go, F for Fake is a pretty good one.

Plus that coin and key trick Welles does in the train station. He's wearing thick gloves when he does it, and for the real up-close stuff there are no cuts. I'm not a magician myself, but I would have to guess that doing a trick like that with thick gloves on has to be several times more difficult than doing it bare-handed. So there's that, too. But yeah, the frozen peas thing: pretty funny.
Posted by bill r. at 7:45 AM