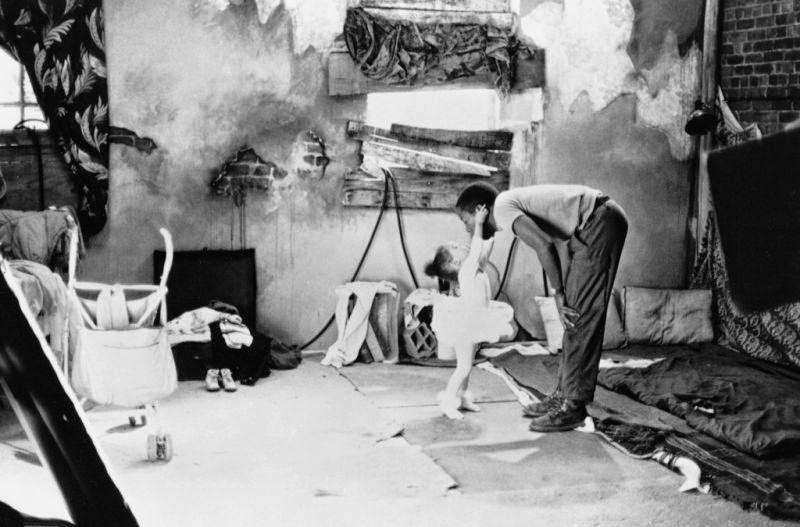 There have been a number of post-sound era silent films, but the three that are best-known are probably also the most traditional. In 1976, Mel Brooks released Silent Movie, a film that was undeniably ambitious but is also, even more so than other classic Brooks films, kind of a goof.  In 2011 Michel Hazanavicius's The Artist became one of the biggest films of that year, winning the Oscar for Best Picture, among other awards.  That film, too, strikes me as being kind of a goof.  In between those two more popular movies is Sidewalk Stories from 1989. Written and directed by Charles Lane, who also stars, Sidewalk Stories, while a comedy, does not seem like a goof. In a curious reversal of the norm, by placing his influences right up front, Lane separates his film from similar ones that seem to exist because someone was dared to make them.

Sidewalk Stories which Kino Lorber recently released on DVD and Blu-ray, is about a poor sidewalk portrait artist (Lane), who sets up his public studio just outside Wall Street.  An early altercation with another portrait artist (Tom Hoover) stemming from who has the right to work this patch of sidewalk, sets the tone early, and also, in the physical comedy and given the way Hoover towers over Lane, immediately signals that Charlie Chaplin is the major point of reference here.  In fact the whole film is a kind of remake of Chaplin's 1921 film The Kid (it gives me no pleasure to admit this, but I feel I'd better: I have never seen The Kid). What plot there is to be found in Sidewalk Stories  revolves around Lane's character taking into his protection a little girl (Nicole Alysia), after her father (Darnell Williams), a gambler and all-around hustler, is murdered. Lane's artist, who lives in a hovel of an apartment, is reluctant to involve himself -- initially he thinks his conscience will be clear if he simply wheels the little girl in her stroller out of the alley where the murder occurred and leaves her out in the open where someone else, someone who isn't him, will find and take care of her. But he can't do that, and soon the girl is living with him, eating his cereal, and as he tries to track down her mother the two inevitably bond.  Along the way, a wealthy store-owner (Sandye Wilson) who first has an awkward encounter with Lane's while getting her portrait drawn and then later catches, but does not expose, the artist stealing children's clothes, toys, and etc. from her store, becomes enamored with the motley pair, and suddenly the artist sees possible happiness within his reach.

Obviously, there are a lot of technical challenges inherent to making a silent film in the sound era (I suspect it seemed less daunting in the 1920s), but Lane eschews the most time-honored crutch: intertitles, the cards of text so familiar to those who watch and make silent films, and which Mel Brooks used in Silent Movie as an opportunity to cram in more jokes. Sidewalk Stories has no exposition or dialogue presented in this way, however, a choice rare enough that Arthur Robison's otherwise not terribly well-known German Expressionism classic Warning Shadows from 1923 is actually known for this same absence. So it's not common, is what I'm saying. It doesn't impede Lane, though, who is able to tell his story, and communicate everything about his characters he needs or wants to, entirely through facial expressions and gestures. It's so impressive that it's easy to miss that he's even doing it. Lane's own performance, not surprisingly, is especially sharp in this regard, and he's a rare actor who is able to -- never mind actually want to, because he thinks it's a good idea -- deliver a naturalistic silent performance. Another actor who could do that was Chaplin, and suddenly you begin to see the inspiration more clearly. Nicole Alysia, the little girl, helps, though I don't know if you can call this a performance -- she is just a little girl being a little girl. I mean, boy, she's sure great at it, but the work in this arena is again done by Lane, who doesn't try to draw a "performance" out of her. If he had, the film would've been sunk.

I must say, though, that I don't believe that Sidewalk Stories is especially funny. In this film, Lane delivers a very good performance, but doesn't offer much in the way of comic inventiveness. Chaplin was one of the great comedic innovators in film history, and all Lane does is borrow from him. The showdown between Lane and Hoover early in the film is a standard-issue Chaplin bit to which Lane adds little, and another moment that features Lane clumsily pushing the girl's stroller and kicking his leg out to one side, is begging the audience to make the Chaplin connection. The laugh comes, if it comes, from recognition, not surprise.

By the end of Sidewalk Stories, it's pretty clear that Lane admires Chaplin for lots of reasons that have little to do with comedy. A curious feature of a lot of modern silent films, including Silent Movie and The Artist, is that they often feature some small amount of spoken dialogue. In Silent Movie this comes in the form of a reasonably funny gag; in The Artist it functions as the last in a series of "movies are magical" sentiments. In Sidewalk Stories, Lane uses sound to make what he no doubt views as the most vital link between his film and Chaplin. Chaplin was a great filmmaker and comedian, and he often used these talents to make a political or social point.  That's what Lane is after too, to join the pure cinema of silent film to politics. In some ways Lane's message is always there in Sidewalk Stories, but at the end, when the sound kicks in, it becomes the movie. It's an effective moment, helped along by the fact that, with one possible exception (the line I'm thinking of seems a bit much, but I think this is arguable), the dialogue we now can hear is not didactic. To explain any of this would be to ruin the moment, and I feel like I shouldn't do that. At any rate, that moment becomes the whole movie, which you can't say about Chaplin, even at his most political. He was too inventive, and Lane could have used more of that. But you also can't say, or I can't, that Lane's Chaplin references become the whole movie -- Sidewalk Stories feels more like an act of picking up the thread Chaplin left behind, rather than one of mere homage.

Since Sidewalk Stories, Lane has had trouble getting films made. He made another comedy a couple years later called True Identity, and since then nothing much. Apparently he's currently working on a film called Resurrection Man about Grandison Harris, a slave bought by the Medical College of Georgia in 1852 and tasked by them to rob graves to supply the college with specimens. A film further away from Sidewalk Stories would be difficult to imagine, and as an opportunity to flaunt his own creativity it must have Lane feeling incredibly impatient. I hope he gets it made.
Posted by bill r. at 5:39 PM