Monkey on the Moon 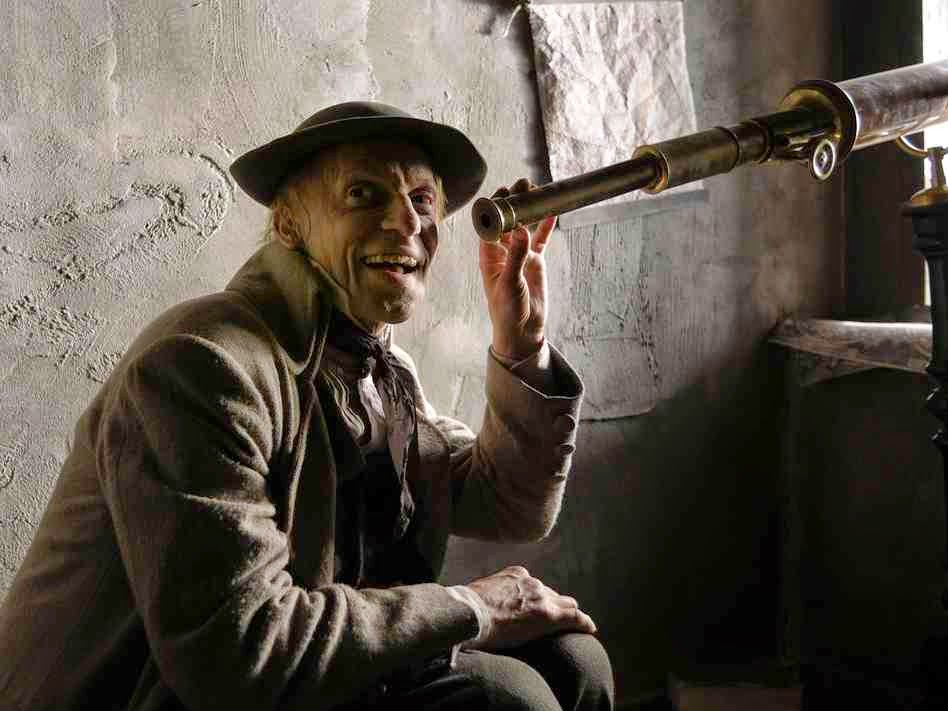 Alexander Sokurov has been making films since the late 1970s, but it wasn't until 2002 that he gained any really significant international accolades.  That was the year he released Russian Ark, a film shot on HD video in St. Petersburg's Hermitage Museum, and consisting entirely of a single, 90-some minute shot.  I watched that film, coming to it somewhat eagerly, shortly after it was released on video, and found it rather enervating.  While Russian Ark was plainly meant to be a sincere and serious exploration of Russian art and history, it nevertheless played for me as a commercial for the coming digital revolution.  Of course that was twelve years ago, and as you can imagine I haven't revisited the film.  Still, whether or not my assessment was fair, that's what lingers.

I therefore -- and this I make no particular excuse for, other than "there are only so many hours in a day" and so on -- didn't spend a lot of time keeping tabs on Sokurov's subsequent career.  Despite my apathy I did pick up on the fact that his major work, the fame of Russian Ark's novelty be damned, was apparently this series of films about 20th Century dictators and the dangers of ideology, focusing on those involved in or who could be linked in some way to World War II.  Moloch from 1999 is about Hitler, Taurus from 2001 is about Lenin, and 2004's The Sun is about Hirohito.  I recently watched The Sun (and I have Moloch pending; Taurus isn't easily available in the US) and found it a singularly strange film, utterly tone deaf when it came to Americans, and American actors, and possibly similarly tone deaf when it comes to the Japanese characters and actors that make up the bulk of the project -- I wouldn't consider myself the last word on that one if I were you -- but nevertheless Issei Ogata's performance as Hirohito is strange in a way that at least creates an illusion that "Perhaps he was really like this."  Or more to the point, "This is the dramatization of a psychology it is beyond my capacity to imagine."  It's a bit of a mess, even visually, but compelling.

I was surprised to learn, as I watched the end credits of Faust, Sokurov's most recent film, from 2011, that it is the final part of the tetralogy described above.  The film, which Kino Lorber is releasing on DVD tomorrow, is ostensibly an adaptation of the immortal and eternally adapted Goethe classic, though everyone, including Sokurov, thinks it's a pretty good idea to not expect too terribly much Goethe from the film.  Shot in a boxy 1:1.33 aspect ratio (I know, I never mention that stuff, but it seems like something to be noted in this case, even if I'm going to scoot right along and never look back), this Faust depicts the titular doctor (Johannes Zeiler) as penniless and miserable, driven even to commit suicide by drinking hemlock, only to be thwarted when Mauricius, a moneylender -- that is, Satan -- played by Anton Adasinsky swipes the bottle, drinks the poison down, and doesn't die.

And so then one thing leads to another.  Sokurov's Faust is something of a picaresque -- the film is basically Faust and Mauricius travelling along together, with Mauricius proving his supernatural existence, the two trading philosophies, wallowing in a specifically Middle Ages variety of bawdiness, while Faust's great unspoken ambition, apart from having sex with a beautiful young woman named Margarete (Isolda Dychauk), is to fall ass-backwards into spiritual and moral enlightenment.  I've read complaints that the philosophy in Faust is just a warmed-over jumble of the classics, and yes it all does feel -- and this is possibly even less kind -- somewhat regurgitated.  I also don't think it matters so much.  A scene in the first third of the film that takes place in a weird, otherworldly bathhouse -- one which is nevertheless literal -- over which Mauricius appears to hold sway, features Mauricius stripping naked.  His body is pear-shaped, and made of an alien swirl of grotesque lumps.  He also has a penis where his tail would be, if humans had tails.  You get the idea, maybe, but anyway, Hieronymous Bosch springs to mind.  This is an early reference, and that kind of almost comical repulsion feeds the mind of the film more than the long, windy discussions Faust and Mauricius ramble through.

Apart from Bosch, Faust feels like a cross between something by Peter Greenaway, one of his halfway traditional films like Drowning By Numbers, if that counts as halfway traditional, and Jaromil Jires's Valerie and Her Week of Wonders.  Greenaway precisely because the words don't seem to matter (Greenaway himself would doubtlessly reject this notion, but I don't see him here at the moment, so pfffft) as they get lost in the more plainly significant action, and Valerie and Her Week of Wonders because of the sinister fairy tale, soft-focus, almost cheap fantasy of its visuals.  Faust looks like TV, and not of the New Golden Age variety we're all so deeply grateful to be living in.  His cinematographer here is Bruno Delbonnel, who recently provided the Coen brothers with a softer glow than they usually aim for in Inside Llewyn Davis, and you can see that sensibility in Faust, but the HD digital that Sokurov prefers (it's there in The Sun, too) does nobody any favors.  It's a visual approach that I honestly can't fathom, partly because with a budget of eight million Euros I have to think it could have looked better.  Along the way, Sokurov does things like distort the image by stretching it in a way that reminded me of that scene in Spike Lee's Crooklyn when the kids had to go live with relatives, and the house was shot in this stretched style to signify how alien it was to the main characters.  In Faust, though, it's employed rather more arbitrarily, or if there was a pattern I missed it -- every scene is as alien to Faust, and he reacts to it in the same way, as the one before (besides which, I seem to recall thinking that part of Crooklyn was that film's least successful section).

However, by the end of Faust, as he did with The Sun, Sokurov has overcome the obstacles he laid before himself, and the film, particularly the last half hour or so, redeems it.  In their travels, Faust has accidentally murdered, or anyway killed, Margarete's brother, and his subsequent guilt drives the film's action.  It's nice that the film finally has an engine, but more than that it inspires some of the film's strongest imagery -- the homunculus, for instance, and the geyser footage is really something.  On top of that, all the chatter from Faust and Mauricius comes down to something very blunt, a very primitive kind of enlightenment for Faust.  The characters have moved from the city and appear by the end to be in a pre-civilization world, and that's where things get hashed out for once and for all.  And curiously, the most directly illuminating words in the whole film are those from the end credits I mentioned, the ones that explain that Faust is the last of Sokurov's tetralogy about dictators and idealogues. In a very strange way, Faust tells another story of that type, and reveals a means of escape.
Posted by bill r. at 11:01 PM