Kick Me When I'm Down


Of the three filmmakers whose work I've found myself exploring in depth thanks to the kind folks at Kino Lorber, British genre/sort-of-exploitation director Pete Walker (the other two filmmakers are Alain Robbe-Grillet and Jean Rollin, for the record) is the one I remain least certain about.  This despite the fact that his stuff is the least complicated and most straightforward of the three by far, yet his films are so uneven.  He can be bluntly terrific, or he can take a genre premise that seems like it can't miss and, as he did with The Flesh and Blood Show, turn out something that is almost bizarrely tedious.  But when he's good, there's a sharpness to his ideas and a subtle weirdness to his stories that keep me, anyway, curious about what else he's done that I haven't gotten to yet.  Thankfully, Kino is releasing two more this coming Tuesday, and they're curious ones.  More below! 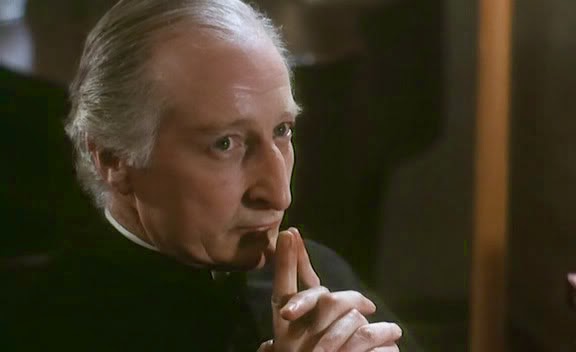 House of Mortal Sin - Part of Walker's whole deal, supposedly, was that he would, at least on occasion, inject a social conscience, or a strain of satire, into whatever genre proceedings he was engaged in at the moment.  Or, another way to go, that genre film would have Walker's message right there on the surface, as plot.  See House of Whipcord, for example, or this film from 1976, House of Mortal Sin (aka The Confessional), which I gather is one of his more personal projects.  Walker said of it "I made that film because I went to a Catholic school where hellfire and damnation were rammed down my throat."  So you might think that this story, about a repressed, insane, and murderous priest (Anthony Sharp) who stalks the young woman named Jenny (Susan Penhaligon) who somewhat randomly winds up in his confessional, confiding her romantic travails, would wind up being fairly hysterical as far as its message is concerned.  But actually no.

Whatever Walker's faults, I've yet to notice him taking the easy way out when it comes to delicate subject matter (to a fault sometimes, as we'll see).  The reason House of Mortal Sin isn't the screeching condemnation of the very concept of Catholicism I'd feared it would be is because, to begin with, he doesn't allow Sharp's Father Meldum to be the last word on the subject.  In fact, he's presented as only the worst of a fairly decent lot.  Thrown into the mix to show that the Catholic faith can be warm, hopeful, caring, and like that, is Norman Eshley as a younger priest whose most flagrant subversion of the Church is to wonder aloud if maybe this vow of celibacy thing is really necessary.  Even then, when he realizes he's in love with Jenny's sister Vanessa (Stephanie Beacham) and that he can't deny it, he simply consults with one of his Catholic higher ups, they say "Hey man, I get it, go and have a happy life with her, you can still be a good Catholic without being a priest."  Take that, the Pope!

On top of that, and better for the film as a whole, is the fact that Walker (who conceived of the story before handing it over to his regular screenwriter David McGillivray) shows far too much pity for his villains here.  Father Meldrum is a villain and a hypocrite, but he's in an almost constant state of despair because of the confusion of incredibly strict morality and crazed, denied passions, not to mention loneliness and the aftershocks of what you sense was a pretty horrible childhood.  Sharp is wonderful in the role, giving a performance that is as moving as it is unsettling, and he's paired with  Sheila Keith, so memorably terrifying in Walker's Frightmare, and a murderer again here.  But this time she's given a whole speech that is not about murder, or any kind of religious fundamentalism, but rather about how her life might have been happy, but instead wasn't. She doesn't quite frame it like that, but that's what's going on, and suddenly House of Mortal Sin doesn't really seem like the critique of modern religion that Walker evidently had in mind to make.  Which isn't to say it's all roses by the end.  Like House of Whipcord, House of Mortal Sin has an incredibly bleak ending, one that works as horror and might indicate Walker's idea:  whatever their motives, these are the priests that are taking over.  Probably this was the gist, but I can't say it quite plays like that for me. Instead it plays as a sad and bloody story, one without an agenda.  So better, in other words. 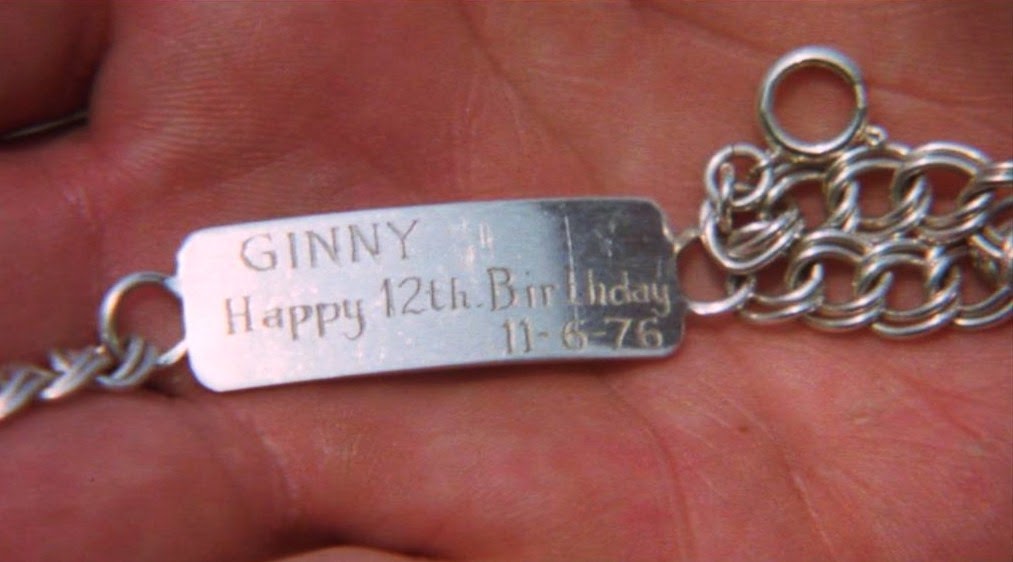 Home Before Midnight - Okay, well then.  Here's the idea behind this one:  a young woman named Ginny (Alison Elliott) is hitchhiking home and is picked up by a young man named Mike (James Aubrey).   Mike writes songs for a successful pop band called Bad Accident (two things about Bad Accident:  the front man is played by Chris Jagger, Mick's brother, and based on the music heard in this film, Walker's conception of pop music in the 1970s is deeply nightmarish), and is therefore financially and socially in a good position to dazzle Ginny during the courtship the two engage in pretty soon after meeting.  Their relationship is sexual, things seem pretty good between them, until Mike finds the bracelet pictured above and realizes that Ginny, who he'd taken to be maybe 19 at the oldest, is, in fact, 14 years old.  Horrified, he tries to end the relationship reasonably, but actually because he doesn't think there's anything morally wrong with a 28-year-old man having sex with a 14-year-old girl, he lets Ginny talk him out of it.  So they keep going, until the truth goes public, Bad Accident starts distancing itself from Mike, and the truth of statutory rape becomes, as Ginny is questioned by her parents and police, an accusation of violent rape.

And oh, how we are meant to pity poor, guiltless Mike, who, at nearly 30, only wanted to have sex with a schoolgirl.  He frequently, and self-righteously, claims to have done nothing wrong, and since we know that he didn't rape Ginny it's easy to figure Walker and screenwriter Murray Smith agree with him.  There are little trumped up things, like Ginny's father smacking her ass and calling her "sexy" that make it clear that Walker believes there is a great deal of hypocrisy at play when guys like Mike get caught out and brought down in these kind of statutory sex scandals.  My own reaction to this point of his is "So what?" Because Mike's guilty, and all the more despicable for his claims of victimhood.  And for a while the film can be really confounding in the way it portrays Ginny as a girl whose behavior that eventually leads to Mike being arrested for rape is precisely that of someone not yet old or mature enough to be having sex with anyone, let alone an adult.

But while a lot of these faults remain faults to the end, Home Before Midnight does turn out a bit more thoughtful than it first appears.  A scene where Mike's father expresses his belief that his son didn't assault Ginny, but then admonishes for what he did do, and another when Mike's encounter with a pedophile forces him (though we don't see him do this, we can imagine it) to consider just what exactly he was up to with Ginny, even during their good days, reveals that Walker is maybe of two minds about all this, so that even the film's faults end up having a different texture.  The film is maybe not as level-headed as it could be, but it's smarter than it at first makes you think it is.
Posted by bill r. at 1:04 PM

Haven't seen either, so I can't really say much about them. Your response to Home Before Midnight is a little confusing to me, though. You say this rock'n'roller chap Mike's perhaps ill-judged affair with Ginny is blown up into a phony accusation of violent rape, and then you criticize the movie for apparently showing some sympathy for the guy's lot. Mike might be guilty of a lot of things, including being an insufferable twat, but you seem to have dismissed out of hand this idea of him being falsely accused of a violent crime, which sounds to me like the very heart of the matter presented here, as though it's some piddling minor detail. Again, I don't know this movie, all I have to go on here is your review.