There's a Porpoise Close Behind Us 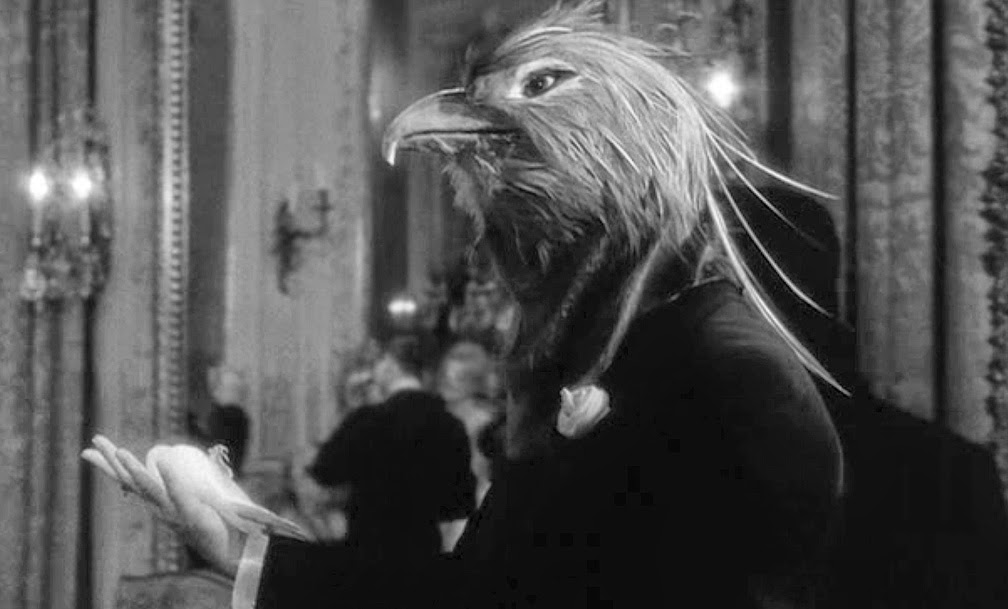 A wealthy banker named Favraux (Michel Vitold) is receiving threatening letters which demand that he provide financial restitution to people the author of these letters say are Favraux's victims.  If he doesn't do this, Favraux will be punished severely.  The letters are signed "Judex."  This strange form of altruistic blackmail comes into Favraux's life as his bank is about to celebrate an anniversary, and his daughter Jacqueline (Edith Scob) is to be engaged.  A private detective (Max Montavon) is hired to provide security against theft at the upcoming party that has been planned to commemorate both events.  We see Favraux planning stock market malfeasance shortly before an old man (Rene Genin) accosts Favraux, saying that he took the fall for Favraux, spending twenty years in prison for a crime he didn't commit because the banker promised that his wife and son would be looked after while he was away, and he would finally come home to wealth and security, but instead he came home to poverty, and news that his wife was dead and his son was missing.  He demands that Favraux help him find his son, but Favraux brushes him off.  Later, Favraux finds and murders the old man.  Finally, the night of the party arrives.  It's a masquerade party; everyone is wearing a bird mask, including a mysterious magician who wanders through the crowd performing tricks with doves.  A foreboding hangs over the proceedings because Judex has assured Favraux that if he doesn't do what's right, Judex will punish him mercilessly.  We know Favraux has done nothing that can be called right, and at the hour named in Judex's letter, Favraux suddenly collapses and dies.

Which brings us to about minute twenty of Georges Franju's 97 minute-long Judex from 1963, a remake and, perhaps more to the point, condensing of Louis Feuillade's five-hour serial from 1916.  The idea behind that above paragraph (which spoils very little) is to highlight for you how condensed, and relentlessly plotted and eventful Franju's film, which is being released Tuesday by Criterion, really is.  A great admirer of Feuillade, Franju (best known for his exceptional 1960 horror film Eyes Without a Face, also available from Criterion ) came to his films as an adult; nevertheless the spirit of this remake of Judex feels similar to the one that led Ang Lee to make Crouching Tiger, Hidden Dragon, a film that was at the time uncharacteristic for him.  In other words, both directors wanted to make a film like those that delighted and inspired them on the level of pure storytelling.  Plus other stuff.

And Franju succeeded.  Judex is almost ruthlessly entertaining, dumping plot twists into the mix by the bowlful, veering off into avenues that might appear at first to be dead ends, or perhaps merely  subplots, but turn out instead to be the main plot.  I confess I haven't seen Feuillade's Judex, but I have seen Feuillade's Les Vampires from 1915, and Judex -- Franju's Judex I mean -- put me in mind of that serial, and the way our main characters, such as the main detective, or the famous villainess Irma Vep, could drop out of the story for many episodes at a time to make way for long stretches of action the importance of which, however genuinely absurd it may be, won't be understood until later.  In Franju's film, who I understood to be our main villain changed twice.  In fact, Judex is finally not up against some wealthy conspiracy of evil, as the cold-hearted Favraux might indicate, but a couple of weasley street thugs.  Not terribly dissimilar to those times when Batman is seen punching out a mugger, but has that ever been the main plot of a Batman story?  Batman not being a random or irrelevant point of comparison?  I can't recall such a story, but that's fine in the end, because Judex (played, I just realized I haven't said, by Channing Pollock) is up against Marie Verdier (Francine Berge), who ultimately comes off as an inept Irma Vep.  But who ever said movie criminals always had to be bright?  It's funny how she never actually seems close to winning, though.

What is all of this in aid of, finally?  What I've been saying, I mean?  I don't know!  This movie is bonkers!  Les Vampires was bonkers too, but it was expansive.  It's craziness could stretch out.  Franju's decision to take a similarly (I think it's safe for me to assume this) mad and wildly excessive plot construction and run it through a compactor can't have stemmed only from the realization that they simply were no longer making 5-hour serials in the 1960s.  There's a fair amount of winking going on here.  Franju knows what's up.  Even if the plot of Feuillade's original also turns on a moment that perhaps can best be illustrated in print thusly:  "Well as it happens, I have an acrobat right here," that moment would, due to the considerable length of serials, exist among a grand sweep of events.  Franju's Judex works not as a grand sweep but as a mad dash, and Franju's approach to pacing here could possibly be regarded as intertextual.  Hey listen, I don't like that term any more than you do, but it can't often be applied to questions of pace.

Plus which, you don't have to accept Franju's winks.  Another thing his Judex does is make a case for the joys of pure plot, maybe the most derided aspect of storytelling, but without which a vast swath of world classics would collapse into mud.  Franju is playing around here, but he means it at the same time.  Here's a story that won't stop.  You can't watch the beginning and guess the ending.  And if Judex the hero is never more interesting as he is when dressed as seen at the top of this post -- he is, in fact, rather bland when he finally steps out as himself -- the nature of this kind of story is such that he can drop out so that more exciting people can take over, or maybe more to the point, who any of these people are doesn't finally matter much at all.  What matters, what's fun, what Franju is messing around with here, is the things these people do, and what the plot dictates must happen to them.  The plot can be pretty merciless, but Judex warned us it might be.
Posted by bill r. at 9:54 PM