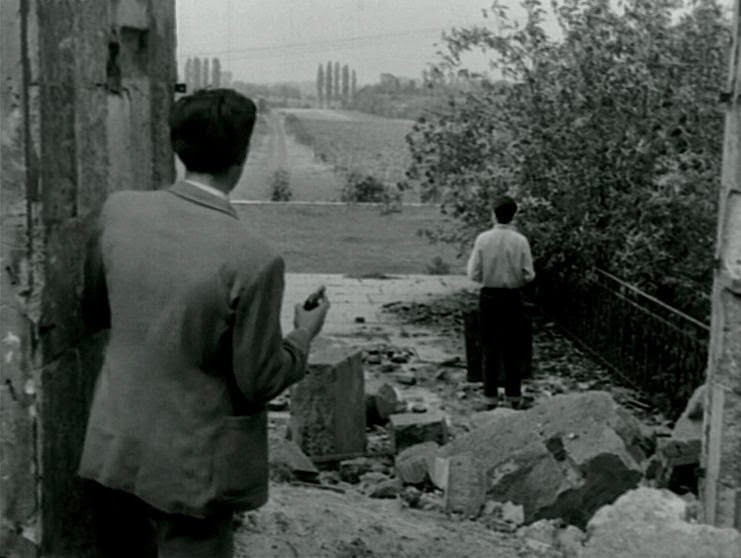 It can be a surprising thing to learn -- and, if you're me, later to remember -- how, and I have to think of a way to say this that doesn't sound pejorative because that's not the tone I'm trying to strike here at all, compact the body of work of certain admired artists can be.  For every Ingmar Bergman or Alfred Hitchcock, each of whom made dozens of films, there is a Robert Bresson or Stanley Kubrick, both major directors who nevertheless each made only thirteen feature films apiece.  These things happen, the reasons for it can be and are various, and Kubrick himself encompasses all possible excuses so just go to him with your questions.  I don't mean to make too much of this, but it can kind of take you aback when you finally notice it, as I recently did with the work of Michelangelo Antonioni.  I've become particularly interested lately, you see, and the big surprising reveal is that he only made sixteen feature films; on top of this, if you want to start throwing around asterisks, one of those, Chung Kuo, China is a documentary and another, Antonioni's last, Beyond the Clouds from 1995, was co-directed by Wim Wenders.  That leaves fourteen on which the man's enormous reputation rests, and yet, even so, the gulf, in style and approach more so than in quality, between 1952's I Vinti and 1964's Red Desert, is enormous.

In the above example, Red Desert is a somewhat arbitrary example, though one chosen because I recently watched it, as I recently watched I Vinti, chosen less arbitrarily as it has just been released on Blu-ray by Raro Video.  While Red Desert is certainly less a synecdoche of Antonioni than L'Avventura or Blow-Up, with its slow, almost somnambulant blending of decadence and calamity it would still have to count as somewhat representative.  I Vinti, on the other hand, is, just for starters, so much chattier than anything else I know by Antonioni that I doubt I'd ever have pegged it as his film if I didn't already know it was going in.  I Vinti (which not at all incidentally means "The Vanquished") was Antonioni's second film, and is comprised of three thematically linked short films.  That theme could be simplified as "murder," or less simplified as "post-war murder" and again as "post-war European murder."  Which is me being glib, but not inaccurate.  The short films, each based on a true story, are called "France," "Italy," and "London," and each revolve around a certain kind of murder.  I'm inclined here to dispense with "Italy" right away, as it is the compromised odd-duck of the bunch.  According to Stefania Parigi's short essay included in the booklet that comes with the Raro disc, this short was originally envisioned by Antonioni as the story of a young Fascist who martyrs himself so that his act of terrorism will be blamed on a group of Communists. He was forced by censors to mute the politics nearly into ambiguity (I say nearly because the character Claudio, played by Franco Interlenghi does have a speech about traitors ruling Italy, and his belief that his particularly ideology would rise again, and given the character's youth and the fact that I Vinti is a 1952 film, it's not a big leap to imagine he misses Mussolini pretty badly), but even that got obliterated before I Vinti was released so that "Italy" as it exists as part of the complete film is a kind of weakly defined, apolitical story of a young middle-class smuggler who shoots his way out of trouble and later dies of injuries sustained in a fall.  It doesn't have much personality, in other words, and it's hard to see why Antonioni's already censored, but easily more vital story about Claudio blowing up a factory, which still exists in full and is included as an extra on the Raro disc, hasn't by now simply been restored as a part of the film.  But anyway.

Far more interesting are the other two stories.  In "France," a group of young people plan an outing with another friend named Andre, who they plan on murdering.  Ostensibly their motives are financial -- they talk about using his money to escape -- but they come from families that not only appear to be caring, but also well-to-do.  I Vinti is bookended by moralizing voice overs about this young generation vaunting the individual over all else and casting moral questions into the garbage as they model themselves after gangsters.  This all seems far too on the nose to have been Antonioni's idea, but in "France" there's something to that.  While by no means as explicitly about gangster films as Godard's Breathless, which was still ten years away, there is much that is chilling about the way Antonioni's characters are casual about what they plan to do, and it recalls the separation between what's cinema and what isn't that so fascinated Godard.  For the kids in "France," murder is a way to chase away the summer blues.  Of course, when it comes right down to pulling the trigger, that gun starts to feel a lot clumsier and more slippery than it had before, and the mouth goes dry, and all of this actual reality leads to the downfall of these vile little shits, but before we get there this story could actually just be about a pleasantly frivolous day spent in nature, a film not entirely unlike People on Sunday.  The final scene is kind of ingenious, so simple and perfect in a way that calls to mind the best of short fiction as practiced by Tobias Wolff, for instance.

The last of the three films is "London," and like "France" it tells the story of a man who decides to commit murder with a terrible ease.  The murder has in fact already occurred when the young man named Aubrey (Peter Reynolds) approaches a newspaper reporter named Ken Wharton (Patrick Barr) and tells him that he's just found a dead body in the park, and for a fee he, Aubrey, will write about his experience for Wharton's paper.  Wharton agrees, and Aubrey, not at all disturbed by what has happened, keeps looking for more angles to get some work, or any case some money, out of this, until to no one's surprise he confesses that he murdered the woman, a prostitute, and isn't his confession worth maybe a couple of bucks?  The confession is genuine, and Aubrey is of course arrested.  The key to how Antonioni approaches this kind of material, which deals with the question of why a man would commit a murder for apparently no real reason, is that he doesn't try to answer anything.  The power, and the terror, of "London" is watching Aubrey as he tries to use a corpse as his means to get ahead in the world, but only as an afterthought -- that's not why he killed her.  Antonioni doesn't even make Wharton desperate to figure this guy out.  He just becomes depressed.  What's left to do besides that?
Posted by bill r. at 12:30 PM