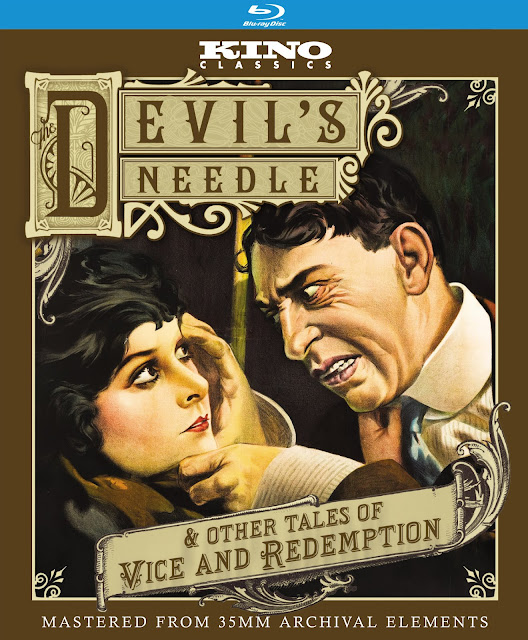 Remaining in the lead, so far as I can tell, when it comes to high quality Blu-ray releases of silent films is Kino Lorber, who tomorrow will be releasing a fascinating collection of social dramas under the umbrella title The Devil's Needle and Other Tales of Vice and Redemption, and on July 10 will follow that up with The Saphead, Buster Keaton's first feature as a lead actor. The Saphead has had a DVD release before, but to the best of my knowledge this is the first commercial release of any of the films contained on the Devil's Needle disc, and not a moment too soon -- each of the three titles has been preserved by the Library of Congress, and brother did they need it.

The title film, The Devil's Needle from 1916 and directed by Chet Whitley (for the record, according to the very informative notes by Richard Koszarski that come with the disc, the version available here is a re-edited release from 1923), is about what you'd expect it to be about, namely drug addiction. In this case the man sent into a headlong descent to the bottom is an artist played by Tully Marshall. Norma Talmadge plays his model who took up the needle habit some years back as a means to obliterate the unpleasantness of the outside world, and, seeing her painter friend struggling with hopeless love, poverty, and the lack of inspiration, urges him to follow suit. Which he does, and Marshall is soon off his nut. But this isn't Reefer Madness, and while strict realism is hardly a goal here The Devil's Needle doesn't finally function as hysteria but as melodrama. The performances are quite good -- Marshall especially strikes the right notes in a role that could have easily slid into unintentional comedy -- and the film offers hope to all those lost souls out there. But almost more fascinating than any of the very solid filmmaking on display is how The Devil's Needle seems to have been plucked by its restorers from from the verge of total destruction. Sections of the film have been badly eaten away by age and the standard ravages suffered by celluloid, though you could, if you wished, think of this as a visual match with Marshall's own dissolution. Then again, the damage is at its worst during the considerably more heartwarming conclusion. I can only be grateful to be able to see this film at all. 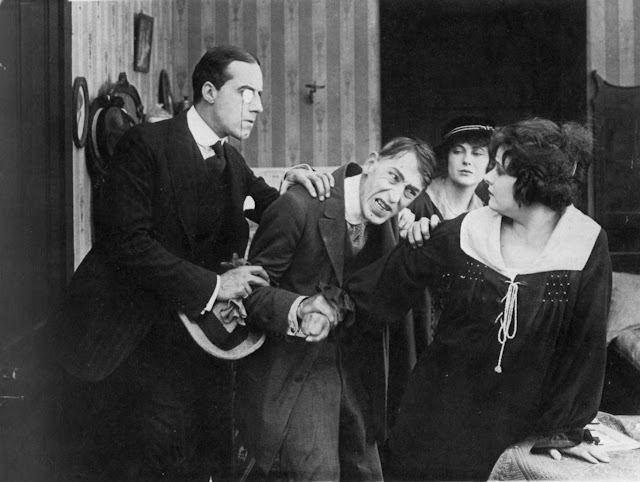 Faring better in at least the sense that it seems whole and largely unscarred is 1913's The Inside of the White Slave Traffic. Directed by Frank Beal, the only reason this 28-minute film isn't a documentary is that documentaries as we know them didn't exist in 1913. Its goal, apart from striking terror in the hearts of young women, is entirely educational. It tracks the sad life of one young woman who is roped into the world of white slavery by an amoral "procurer" (Edwin Carewe), from how she first stepped wrong to how she found herself unable to extract herself despite her best and most honorable efforts. Twice in this film we're shown a card of slang used by white slavers to mask their true meaning, and both times it's the exact same list. As filmmaking its ambitions are far below The Devil's Needle, though as a historical document it's invaluable. 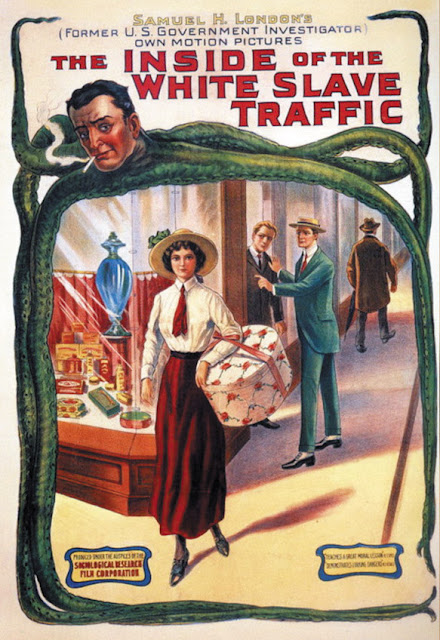 Finally we have Children of Eve directed by John H. Collins in 1915. This Dickensian story of coincidence, poverty, callous privilege, tragedy, and then-recent history is the kind of film where a decent, good-hearted man suffers an emotional blow, and the story cuts to fifteen years later when that man has suddenly, to the viewer's eye, become almost entirely hateful. The rest of the film, and its convoluted but actually rather rich plotting, exists to bring that man, who takes a backseat to other characters once that skip ahead occurs, to his senses, even though, in true tragic fashion, it's far too late. Children of Eve is really Dickensian, as I say, even at only 66 minutes. The horror of early 20th Century child labor is its social focus, and a fictionalized depiction of the real Triangle Shirtwaist Fire of 1911 is its climax, a culmination of the characters' various threads, and a driving home of its points. It's all very good, and strikingly sad at the very end. Even Dickens at his darkest left so little light. Meanwhile, the Buster Keaton film The Saphead -- or rather, the Herbert Blache film The Saphead starring Buster Keaton – is a historical document of different kind. In it, Keaton plays some version of the character he would perfect once he stepped behind the camera. But his control didn't extend much beyond that, and the comedic sensibilities of this thing are often baffling. In the film, Keaton plays Bertie, a kind but lazy son of a wealthy Wall Street mogul (and for the record, it's quite possible that the name "Bertie" was inspired by P. G. Wodehouse's Bertie Wooster, introduced in 1916; The Saphead is based on a 1913 play The New Henrietta, but "Bertie" was not the character's name in that original version) falls in love with Agnes (Beulah Booker), his father's ward. But he needs to get his act together if he's ever to win her heart. Or does he? Every conflict raised by the plot is summarily dispensed with, leaving behind no change. Bertie thinks women only love bad boys, and half-heartedly tries to live that life, but soon finds out that Agnes doesn't care about that and already loves him. His father tells him he'd better get a job, and cuts his son off, if he's ever going to allow him to marry Agnes. But -- and this is intended as a joke, in fairness -- the father's last payment to his son is $100,000. That's $100,000 in 1920 dollars, too. But Agnes doesn't even care about that, and says she will marry Bertie regardless of whether or not he gets a job. Okay, but the father will NOT attend the wedding. Until he sees Agnes in her wedding gown, and melts. And so on. None of the conflicts last long enough for any jokes to occur. That is until the end, when other elements of the plot join up to place Bertie on the floor of the Wall Street stock exchange, and here Keaton's gifts are given as full a field as The Saphead ever allows, and it must be said that it pays off quite nicely. It's a manic and quite funny climax, coming at the tail-end of a film that is otherwise a real head-scratcher.

Anyhow. No matter. Elsewhere plans are no doubt moving forward to get Drop Dead Fred on Blu-ray while He Walks By Night and Detour are walking around asking when they'll even get a regular old DVD release. So thank God for Kino Lorber.
Posted by bill r. at 5:08 PM