The Olympics: a time for sport and international brotherhood, shot through with rage-inducing international rivalry, has kept our planet from the brink of disaster for literally 30,000 years. Today, in 2012, we, as a people, find ourselves just now getting around to celebrating the 30th anniversary of the first Olympic games, and while at this rate we’ll obviously be doing this crap forever, it is nevertheless a testament to our general delightfulness that we have yet to succumb to the ever-growing pressure to admit defeat and say “Okay, we’ll just wait until everyone’s asleep and then take turns slitting each other’s throats” and instead wake up each morning, look the Four Horsemen in the eye, and announce “No! Today we stand strong in hope and sports! You will not have us today, Plague Horse!” And we keep this up for two whole weeks!

Plus if nothing else it’s funny to watch countries like Burma or whatever only have like two athletes in the whole thing, and they finish 11th and 34th in the same event the day after the opening ceremonies and then go home on a plane made out of wood. “Duh, we are too good at sports!” Yeah, I don’t think so, pal! BA-DOOSH! We just got our tenth gold medal while you asswipes were tying up your bindles! That shit is so classic. But also, there’s brotherhood. In ancient times, the Olympics were held probably in the Coliseum, if not there then the Parthenon, if not there then the Acropolis, and it was a way for the ever-warring Greeks to say “You know what? Let’s just wrestle for a while.” No wars, no battles, no stabbing, just wrestling. Maybe eat some grapes between bouts, tell stories about their main god turning into a fish and raping that one mailman who you never see anymore, and just in general being a bunch of Good-Time Charlies. Later, they would stab their leader an even dozen times and then poison the dude who had the idea and who’d started to think that he’d finally made a couple of friends for once in his life, but when the next Olympics rolled around, one guy would look at another guy and be like “Wrestling?” and the other guy would go “Wrestling” and the ruins of this once massive empire would ring yet again with songs and laughter.

Since then, the Olympics haven’t changed too much. There’s still wrestling, for instance. However, it has moved away from the philosophy of its original slogan, “By Greeks, For Greeks,” and embraced a more global participation. I can’t say it’s fully global, and I suspect that some of the smaller, more backwoods countries still don’t really get a look in, because no thank you, but pretty much any country that matters at least gets to have a couple of archers in there. Or handball, have you seen this one? It’s like soccer without kicking mixed with basketball without dribbling. They have goalies but everybody scores all the time so I don’t know why they bother. The goalies are there for the free plane ticket, I think. But the point is if you’re from a country that doesn’t know how to do anything, as long as you promise not to act like a bunch of dickheads, maybe you could play handball. Don’t worry about winning a gold medal because the Olympics aren’t about that. And if France ends up winning the whole business, just ignore them and think “Hey, I got outside for a little bit.”

This is the attitude we should all take to the Olympics. It’s a time for good-natured horseplay, really, in the form of athletic feats that I’m not always sure make complete logical sense. I mean, I’ve been known to win a game of ping pong from time to time, but Jesus Christ! More like ping POW, you know what I mean? That’s how fast it is. Anyway, even Hitler, even that guy, he hosted the Olympics one year. Known primarily for his crotchety public demeanor and run-ins with the press, Hitler still got swept up in the spirit of Olympic goodwill, and when opening the games that year he gave the following speech:

Good morning, sports fans. What a day! I’ll tell you, as a German (well, Austrian, but don’t tell Goebbels that!) [pause for laughter], but as a German, I don’t think I’ve ever been prouder than I am right now. I look out at the crowd of athletes and supporters and sporting enthusiasts, all of one particular race, except that guy, and I think that this is why I became the Chancellor – to see your smiling faces, ready to play! It’s childlike, this wonderment, this sense of play, and it’s something I think we’d all do good to hold in our hearts even as we move away from these Olympic games on back into our daily lives. Sure this will all be over soon, but there’s no reason we can’t carry the spirit onwards. It’s a spirit of love, it’s a spirit of togetherness, and it’s a spirit of fun. Boy, looking at all you guys, I want to jump down off this balcony and join you. And I certainly would if I hadn’t been forbidden to do so by my doctor, on account of the fact that I only have one ball. Let the games begin! Love, Hitler

If even a sourpuss like Hitler can pour himself a glass of iced tea, kick back, and chant “Go! Go! Go!” for any and all countries and athletes, then my goodness, can’t we all do the same? And can’t we, as Hitler implored us to do, remember the joy we felt for these two brief weeks as we watched completely shaved people swim, and strangely wimpy boxing, and people getting all shit-talky about everything, even fucking fencing for Chrissake, and a bunch of sports that frankly I don’t think even exist at any other time, and can’t we, like Hitler, say “Yes!” to life and fun and peace. Thanks, Hitler. We owe you one. 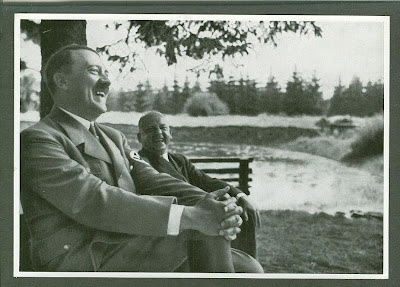 At first I was thinking 9.7, but then the killer trinity of ba-doosh, strangely wimpy boxing, and laughing Hitler put you into perfect 10 territory.
If I may be so bold, I thought perhaps my own recent efforts in the "Olympics Ha-Ha" genre might provide a chuckle in return. http://www.huffingtonpost.com/william-ambler/great-authors-interpret-olympics-announcers_b_1703592.html?utm_hp_ref=books

I...er...think you put a lot more work into yours.

"Marshal uses the Folsbury Flop, or Foolbry Dop as he and his wife know it in the secret language they share. It's the kind of language that seeps up through the cracks of a contented marriage over those long nights around the kitchen table, when the bills are piled higher than what's left to pay 'em and all you got is each other. 'Sooner or later, the gloaming comes for us all, boy.'"

I like King, but boy does that sum up a lot.

What an edifying piece! Hitler, that Schmendrick, for all his fatal flaws, really did give good Olympics.

@that Other Bill guy: Man, Lovecraft knew entirely too much about Synchronized Swimming.