Tomorrow Kino Lorber’s Redemption line will be releasing two films – his last and his third from last, as it happens – by director Vernon Sewell: The Blood Beast Terror from 1968, and Burke & Hare from 1971. Burke & Hare is, of course, about the notorious grave robbers in 19th Century Scotland who sold fresh corpses to doctors, who purchased them in the name of science, donated corpses being rare at the time, until they decided people weren’t giving up the ghost fast enough or in sufficient quantities to satisfy their financial needs and therefore resorted to murder. I’ve now seen five different films inspired by this piece of criminal history, including John Landis’s recent non-remake Burke & Hare, Freddie Francis’s not great but still not bad adaptation of Dylan Thomas’s screenplay The Doctor and the Devils, and Val Lewton and Robert Wise’s The Body Snatcher, for which the Burke & Hare story is only a loose inspiration, but which remains the gold standard for this sort of thing.

Anyway, these Kino Lorber releases are instructive of a certain non-Hammer, non-Amicus strain of late 60s, early 70s British horror, that strain being of the “Well, this stuff’s pretty popular, so…” school of thought. Which is not to say, or even imply, that either film lacks entertainment value, but I have yet to figure out if they’re any good or not. It would also seem to be helpful that while The Blood Beast Terror is ostensibly a serious horror film, Burke & Hare is intended to be something of a black comedy (as is Landis’s film), but the lines between the two films and the two approaches can become rather blurry. The Blood Beast Terror, in particular, is a strange film. It stars a somewhat weary-looking Peter Cushing as a police detective investigating a series of deaths that could be the result of wild animal attacks, or possibly murder – whichever it is, the bodies have been almost drained of blood. Meanwhile, there’s this doctor named Menninger (Robert Flemyng) who is interested in moths, and is conducting strange experiments, and who has a weird, possibly lusty, daughter (Wanda Ventham), a doctor who very clearly is at the center of this whole thing, though what “this whole thing” actually is won’t be made clear, or clear-ish, until near the very end. But it has something to do with a moth creature. That much we find out way earlier. 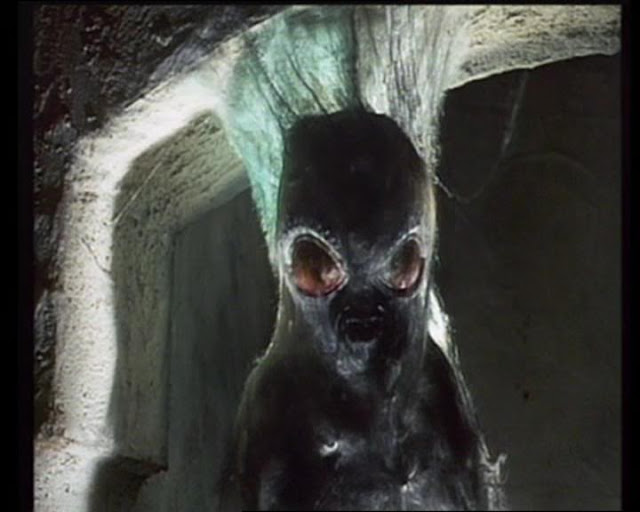 The strangeness of The Blood Beast Terror doesn’t come from its story or visuals – although, in its way, that moth creature is quite something -- or anything like that, but rather from Sewell and screenwriter Peter Bryan’s strange way of stringing everything together. For instance, a character, another scientist played by William Wilde, is introduced at the very beginning finishing up a trip to Africa. When he returns to England he goes to see Menninger, a man he’s never met but with whom he shares certain professional interests. But this man who you’d think is going to have all sorts of impact on the story winds up being nothing more than a clue. More intriguingly, from a structural point of view – if that is the point of view being futzed with here – is a scene about a third of the way through the film involving a play being staged by Menninger’s medical students in his home. This is all part of a larger soiree, but we’re told this play is going to be having a full dress rehearsal, and the rather amazing thing is that Sewell shows us…well, for a little while I wondered if it wasn’t going to be the whole damn play. As it happens, we’re shown the entire last scene. I should have timed how long this lasts, but I’d guess it to be a good five minutes. We never even cut away to any other action going on in Menninger’s home – it’s all about the play. And the play doesn’t actually matter. The contents of the scene do give Menninger an idea for his mysterious experiments, but he could have gotten that idea anywhere, and it is in no way essential that we know how he got there anyway. I mean, it’s a mad scientist play, of the horror variety, so it’s got parallels or whatever, but it doesn’t mean anything. The rinky-dink nature of the play also requires that the scene be played for laughs (not unsuccessfully, it must be said). And so…what is this doing here? The most interesting thing about the play scene is that it reveals either that the playwright, a young medical student, is plagiarizing Mary Shelley, or that in the world of The Blood Beast Terror, Shelley’s Frankenstein doesn’t exist. 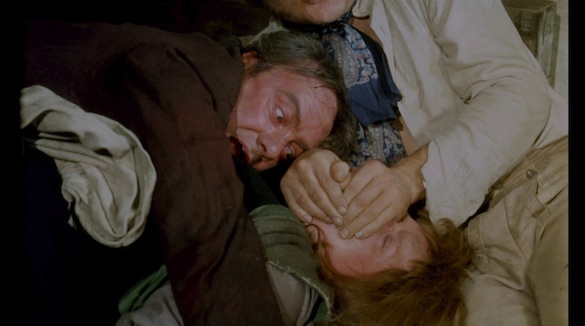 The relative goofiness of The Blood Beast Terror’s play scene is stretched to feature length in Burke & Hare, only this time it’s been slathered in bawdiness. Or “bawdiness.” Well, okay, bawdiness – I would be lying if I didn’t admit that the heart of the film’s good-natured salaciousness, Francoise Pascale, wasn’t easy on the eyes. But while I haven’t yet seen any films from Britain’s famously ribald Carry On series, from what I do know about them, if they’d ever gotten around to making Carry On, Burke & Hare it would have looked a lot like this. The story is well known, and anyhow I already pretty much summed it up earlier, but this time along with the grave robbing and murder, Sewell and screenwriter Ernle Bradford have thrown in a brothel that is frequented by doctors and medical students. So you have Burke (Derren Nesbitt) and Hare (Glynn Edwards) selling bodies to doctors, and then over here what you have is the brothel’s madam (Joan Carol) also selling bodies to doctors. But in a different way! Metaphorically! As opposed to literally! It’s not a very funny movie, is what all those ironic exclamation points are meant to convey. It does have a catchy theme song performed by The Scaffolds, a band that, I’ve gathered, was sort of like The Monkees if The Monkees had been a performance art project, which maybe they were.

So that’s Burke & Hare. It hits some good notes along the way, such as the scene where Burke and Hare, having murdered only the one person at this point, find themselves talking with their respective wives/girlfriends about where all this money suddenly came from, and gradually, but eerie ease, picking up as a group the idea that murder really might be the way to go with this, permanently. It’s sort of chilling in how unadorned the whole scene is. But again, crucially, it’s never funny. The music by Roger Webb seems to filtered in from the next studio over, which was recording music for Tom & Jerry. And I love Tom & Jerry (the original ones, not the later ones where they’re friends, or the weird-ass “Dicky Moe” ones), but using that style of music to accompany the madam going from peephole to peephole, watching all manner of crazy bedroom hijinks, all of which are essentially the same thing, and then shaking her head as though to say “What a world!” is, I have to say, ill-advised. Not that this tone paired with occasional callousness towards the fates of the film’s characters isn’t interesting, in a way, but it all piles up into a weird sort of airy mass of non-Amicus, non-Hammer silliness.
Posted by bill r. at 12:33 PM

Damn, I've always wanted to see these two, but still haven't. I have seen one of Sewell's earlier films, one of the four or five he did from the '40s to the early '60s that were basically all variations on the same idea, of a young couple buying a haunted property and uncovering a tale of murder behind the haunting; the specific one I saw was called Ghost Ship and starred Dermot Walsh and Hazel Court. Strange, incredibly low budget, but weirdly, naggingly memorable.

These are the only two of his I've seen. I don't know if they've been readily available until today. Strange, strange movies, in their own way. Not deliberately strange, I don't think, but that's the final result. BURKE & HARE also just kind of stops, rather than ends.