Doubt Is My Bottom Line 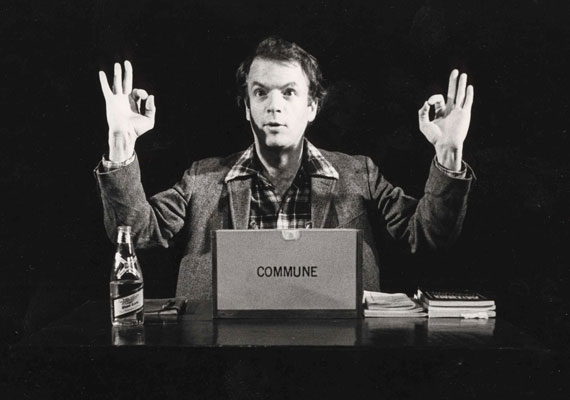 When Spalding Gray committed suicide in 2004, I knew him primarily as an actor. I’d seen him in The Killing Fields, the filming of which was an experience he would later mine for his monologue Swimming to Cambodia, and Steven Soderbergh’s underrated King of the Hill, and any number of other small appearances over the years . I also knew he was a monologist, an artform I’d had little experience with, and recognized primarily, and no doubt unfairly, as a haven for the narcissistic and pretentious. Both of which may well be true, the narcissistic part almost certainly, though in the world of the creative arts why I should have singled out monologists, as opposed to everybody, I don’t know. I could try to work it out here, and the eventual answer would doubtlessly involve Eric Bogosian in some way, but I won’t bother since it doesn’t matter.

In any case, Gray’s suicide made me interested. This is a thing that happens to me when an artist I am only tangentially aware of dies suddenly, and it’s morbid and shallow and I wish it were otherwise. I’d seen clips of his monologues over the years (and I also remember Michael McKean doing a dead-on impression of Gray during McKean’s short stint at Saturday Night Live), and I was aware that two genuine filmmakers, and also Nick Broomfield, had committed some of Gray’s pieces to film. Jonathan Demme directed Swimming to Cambodia, Broomfield did Monster in a Box, and in 1997 Steven Soderbergh took on Gray’s Anatomy, about a persistent eye problem Gray began to suffer from while writing his novel Impossible Vacation, and the proposed corrective surgery for which he did just about anything he could think of to avoid. Last week, Criterion released Gray’s Anatomy as well as Soderbergh’s fascinating 2010 documentary about Gray called And Everything Is Going Fine. The two films, as well as (what I’ve seen of) their generous extras, have been instructive.

There is a problem at the heart of Gray’s Anatomy that nagged at me as I watched it, but became much easier to define later. In releasing Gray’s Anatomy and And Everything Is Going Fine, Criterion has included as an extra on each disc filmed performances of two other Gray monologues: Sex and Death to Age 14 on Fine and A Personal History of the American Theater on Anatomy, both filmed in 1982. Watching the former last night was something of a revelation. It’s just Gray in a chair at a table with a glass of water, telling several individual stories all caught up in the flow of one about his early experiences with death (the Gray family should not have been allowed to own pets) and sex. That’s it, and it’s riveting. Granted, the audience he’s performing in front of seems to think that since the monologue is meant in part to be funny, that must mean everything is funny, so they laugh a lot at times that must have confused Gray, but apart from that Gray simply tells his story. There was an indefinable charisma to Gray, but more than anything he was a terrific storyteller. And completely unadorned, is where my point is leading. In terms of language, Gray avoids anything that doesn’t sound conversational, and if he’s goosing his words a bit you can see him searching for a good way to say something, an entertaining or interesting way to express a thought or description, and even though I know he was, he seems in no way prepared. There is an ease to this performance that is almost shocking. He consults notes, but rarely seems to need them, and his ability to hold an audience’s attention, or that of a home viewer through a stationary video camera, is impressive. What Gray did wasn’t stand-up comedy, not only because Gray’s stories weren’t strictly comic, but the two forms are related. There’s a relationship with the audience, whatever their temperament, that is vital and energetic like that of a comedian with his or her audience – you don’t see a lot of filmed stand-up specials with the comic doing their act to an empty room, and I believe Gray needed that, or at least hugely benefited from it, as well. 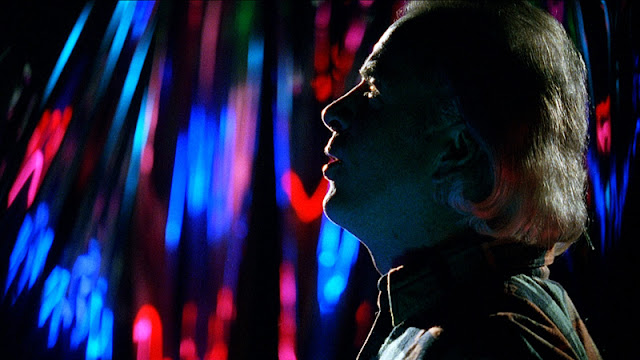 This is not a power that particularly interests Soderbergh in Gray’s Anatomy, however, to the film’s detriment. Soderbergh’s film features only Gray (there are some interesting ancillary interviews with people who have suffered unusual eye injuries, but these don’t interfere with Gray) but he removes the audience and gussies up the performance with cuts and super-imposed effects and sound and wonky lighting, all in an effort, I can only assume, to enhance Gray’s words. Filmed plays, by which I mean plays filmed as they’re performed on stage live for an audience, rarely have any life to them and seem weirdly strained, and perhaps this is what Soderbergh was trying to avoid, but as I’ve implied filmed monologues are not filmed plays. Gray’s weren’t, anyhow; they were pure storytelling. When you’re face to face with a person who has a story to tell and is good at it, you don’t think “I wish when he was talking about the green light he saw inside the house, there was a green light behind his head.” Soderbergh seems to want to show at the same time that Gray is telling, and it’s an uneasy mix. The level of pure storytelling is the level – a very high one, by the way – that Gray operated on, and it is not, as such, cinematic. Soderbergh, on the other hand, is cinematic – what interests him is figuring out interesting ways to film things he hasn’t filmed before. He’s very formal – clinical, those less enamored with him might say – but with Gray’s monologue he’s trying to solve a problem that isn’t even a problem. I admit that I haven’t seen Demme or Broomfield’s films of Gray’s performances, so for all I know Soderbergh is only the third director to make what I consider to be a mistake in their approach to this sort of material. Whoever took that video camera in 1982 during Gray’s performance of Sex and Death to Age 14 and nailed it to the floor and then went to get a sandwich had the right idea.

Thirteen years on, Soderbergh might have clued into this when he was making (“building” might be a better word) And Everything Is Going Fine. Whatever his thinking was, the whole point of that film is to let Gray and, with one exception, Gray alone speak, shed of all the adornments others might wish to impose. Constructed from years of monologues filmed in the same way Sex and Death at Age 14 was (the empty chair that opens that video also opens And Everything Is Going Fine), as well as various interviews Gray gave over the years, including one conducted during Gray’s painful recovery following a terrible car accident in 2001 (the depression that followed is believed to have contributed significantly to Gray’s decision to end his life), Soderbergh’s documentary is very subtly chronological – it strikes me a little bit as an amazing bit of obsessiveness. Technical obsessiveness, along with some other kinds, and in this case that’s all to the good. And Everything Is Going Fine is pretty extraordinary, a feat of architecture as much as of editing, and one that is profoundly reverent of its subject. Gray was preoccupied by death, by suicide – it was in his family – and by the divide between his early years being raised by a Christian Scientist mother, with the attendant dismissal of medical science, and his eventual separation from that religion whose power never quite released him (this is the mostly light-hearted subtext of Gray’s Anatomy, where he fruitlessly pursues all sorts of dead-end spiritual treatments before succumbing to the surgeon). Soderbergh’s documentary lets Gray tell it all, his own way, in bits and pieces, from beginning to end.
Posted by bill r. at 12:24 PM

Gray was an amazing performer. I saw him perform "Swimming to Cambodia, Part 2" in Berkeley one evening. Midway through the monologue, the power went out and we just had emergency lighting. Gray got up and chatted amusingly with the crowd. Fifteen minutes later, the lights came back on, he sat down and picked the monologue up without a hitch. It was impressive.

Both of which may well be true, the narcissistic part almost certainly, though in the world of the creative arts why I should have singled out monologists, as opposed to everybody, I don’t know. I could try to work it out here, and the eventual answer would doubtlessly involve Eric Bogosian in some way, but I won’t bother since it doesn’t matter.

This is why I keep reading you, bill. That and your killer ripped abs.

And Everything is Going Fine was quite a documentary, somewhat confusing in a few parts because of the adherence to allowing only Gray tell the story -- artistically a sound conceit, but a bit clumsy in narrating events since Gray didn't talk about everything in interviews, meaning there are necessary gaps in information. There is a chilling and touching moment toward the end when he's giving his last appearance, or at least I think it's his last appearance -- I may have romanticized it in my mind -- and when he finishes the audience claps briefly and hurries to stand and get their coats so they can leave. He trundles off the stage on his crutches and stops and briefly looks back at the audience but they must have all had their backs to him by then, so he just turns and leaves. And you can't really see his face very clearly, but you don't need to because you know how everything turns out in the end.