Several years ago I read John Buchan's short thriller from 1915 The Thirty-Nine Steps, and after an intriguing and suspenseful beginning I found it to be a very strange grind to get through. Again, it's very short -- my Wordsworth Classics edition comes out to only 98 pages -- but I poked my way through it over a course of I don't know how many days. I think, or at least I hope, I read other books in the meantime, picking up Buchan's most famous novel only here and there, with the thought that if I stayed away too long I'd never finish the damn thing. Lots of pages -- about 90 of them, I'd estimate -- of the hero, Richard Hannay, walking fast with the hope that no one would see him walking fast. Eventually he stopped walking because everything was okay again. 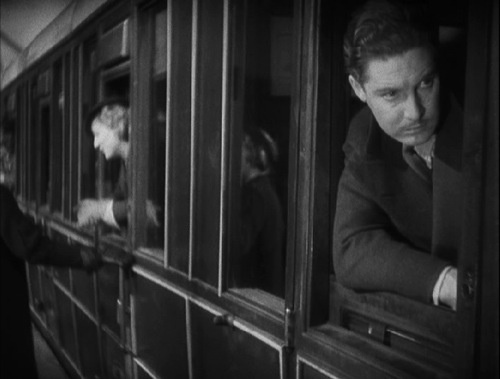 As you may have guessed, I remember almost nothing about the book now, but Alfred Hitchcock's 1935 film version, which Criterion will be re-releasing on DVD, and for the first time ever on Blu-Ray, on Tuesday, and which I just watched for the first time, did ring occasionally familiar (Hannay's take over of a Scottish political rally, for instance), but at no point did I feel like I was being cast back to those brief and confusingly dull moments of reading the Buchan novel because Hitchcock, along with his writers Charles Bennett and Ian Hay, his stars Robert Donat and Madeleine Carroll, and cinematographer Bernard Knowles, took the story and somehow managed to produce a breezy, effortlessly entertaining, funny, thrilling, even beautiful little film. Which probably stands to reason, because the raw materials are pure Hitchcock. However I regard it, John Buchan wrote a book that now seems tailor-made for the young (well, 36) Hitchcock. Many of his pet obsessions were already there, and some that weren't necessarily there could easily be made to be there -- blondes, for example. 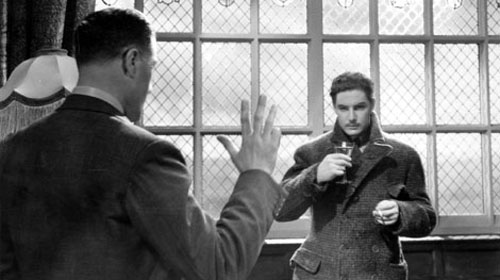 The plot of The 39 Steps (the film shifts to numerals, and so shall I) is very simple. Richard Hannay (Donat) is attending a performance of music hall performer of eidetic feats of wonder Mr. Memory (Wylie Watson) when someone fires a gun. In the ensuing chaos, Hannay meets a woman (Lucie Mannheim) and brings her back to his apartment. There, she claims to be on the run from foreign agents who are trying to gather some particular bit of British aeronautic information, and will use violence to get it. Hannay is dubious, but his doubts are wiped away when we wakes up in the middle of the night to find the woman gasping out a warning with her last breath and with a knife in her back. From there, Hannay is, of course, implicated in her murder, and the rest of the film chronicles, primarily, his run from both the spies and the police, and his attempts to clear his name. The film is not very plot-driven, really, and is much more episodic. Hannay finds himself in the middle of the aforementioned political rally, or he charms a Scottish highlands housewife, and fails to charm her mean and duplicitous husband. I suppose this is common for "wrong man" films, or "man on the run" films in general, but Hitchcock includes some curious bits here and there, such as a glimpse at the aftermath of that Scottish housewife's defiance of her cruel husband. There's a nice sense that the lives Hannay, and eventual love interest Pamela (Carroll), pass through existed before they showed up and will continue after. 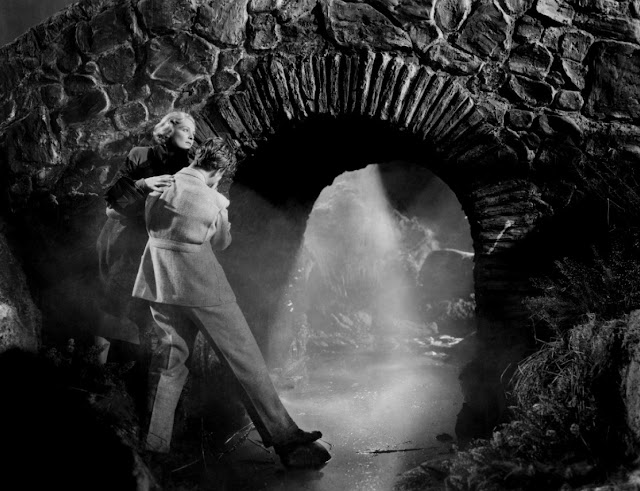 Speaking for myself, the best thing about The 39 Steps is the wonderful just barely, in the grand scheme of things, post-Victorian feeling of it all. The fact that a good chunk of the action takes place in a section of the Scottish highlands that it not only overly populated, but is also not much concerned with what's been going on since Queen Victoria was shown across. In any case, the point is really that the film looks great, especially when things are happening at night. The shadows, the dusk, the grass and bushes graying into black. A long section of the film involving a bed and breakfast, a capture, a nighttime ride, and an escape is very attuned to the look and feel of a certain time of night, say about 10:00 on, spent in a certain kind of place. There's very little music in the film, and so a brief scuffle on a stone bridge provides the only sound at that moment. The rest of the planet appears to be quiet. Aviation plans notwithstanding, The 39 Steps seems a little bit out of time, and therefore timeless.
Posted by bill r. at 12:25 PM

And yet Graham Greene saw fit to base his permanent animus against Hitchcock on the fact that he failed to follow that negligible trifle of a book.

In the collection of Greene's '30s film criticism, called The Pleasure Dome. His ill-will was still so pronounced in the '7os when he wrote the introduction for the collection he made a comment about how he not changed his opinion on Hitchcock's "gimmicks" in spite of what "Mr Godard" thought.

Weird. Buchan could have used a "gimmick" or two. Were he and Greene buddies or something? I find that a very strange book to go to the mat for, especially to the point that you willfully blind yourself (that sounds like a mixed metaphor, but I'm letting it go).

No, not buddies; Greene had been a fan of the book as a teen, as he was of Maugham's 'Ashenden', which of course Hitch filmed and again "ruined" as The Secret Agent. He had more of a point there, although Maugham's book was no ideal subject for cinematic adaptation either. I've always wondered if the crack by Hitch's former crewman Michael Powell at Carol Reed as a "passionless watchmaker" wasn't partly sourced in a little bit of payback, as if to indicate that to have worked so well with Greene as Reed did, you had to have abandoned your independent, non-literary sense of cinema's essence.

I love The 39 Steps. It's such a great Hitchcock that gets acknowledged but not loved enough. It takes a back seat to a lot of his later works but for sheer entetainment, it's one of the best.

Graham Greene was the last British heavyweight champ, if I'm not mistaken.