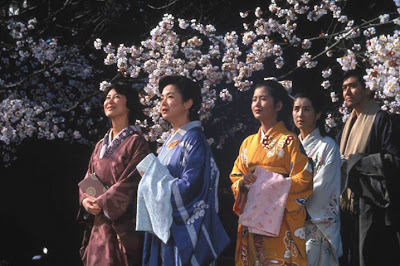 Junichiro Tanizaki's novel The Makioka Sisters was serialized between 1943 and 1948, and met with censorship problems due to its themes of feminine individuality. In essence, what the novel depicts is a Japanese family, once prominent, now humbled, clinging to pointless tradition at the expense of the happiness of at least two of the four adult sisters on whom the story focuses, and possibly everybody else as well. And yet a critical blurb from the San Francisco Chronicle and reproduced on the cover of my Vintage paperback says “Skillfully and subtly, Tanizaki brushes in a delicate picture of a gentle world that no longer exists.” I'm not about to pounce on this anonymous critic based on one sentence, but that "gentle world" is a real puzzler. Not that the novel is free of gentleness, mind you, but Tanazaki's depiction of this world makes it quite apparent that a great deal of needless emotional suffering existed in the wake of all that gentleness. 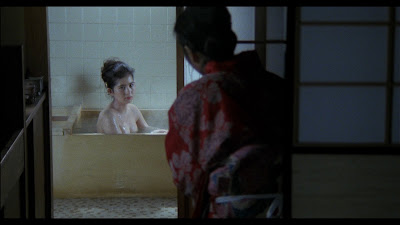 Tanizaki's novel is mournful, but also clinically curious, even to a fault. It might not be necessary for the reader to know, for instance, the travel itineraries of various characters as they journey from Osaka to Tokyo, but you'll get them anyway. It generates a certain coolness, aided by, at least in translation, its very plain style, which will every so often help to off-set some very strong pieces of writing. In any case, all this coolness and detail and relentless parade of illnesses, major and minor (with not always predictable outcomes) and natural disasters helps the reader of the novel, or me, at least, to feel as though he's lived through it all, or at least among it all, with the Makioka family.

This is not quite the approach taken by Kon Ichikawa in his 1983 film version, which will be out on Criterion DVD tomorrow. The story, briefly revolves around the titular sisters: Tsuruko (Keiko Kishi); Sachiko (Yoshiko Sakuma); Yukiko (Sayuri Yoshinaga); and Taeko (Yuko Kotegawa). The two eldest, Tsuruko and Sachiko, are married. The next eldest, Yukiko is not, and Taeko, the youngest, is traditionally (though not legally) forbidden to marry until all of her older sisters are. Making things worse is that Taeko has found a man, or men, who Taeko will bounce off of, and bounce off each other, repeatedly. Yukiko has not found a man, and much of the film and novel are given over to the attempts of her sisters and their husbands, as well as outside matchmakers, to pair her off with a good man. Due to fallen fortunes and previous scandals, as well as the fact that Yukiko is perceived to be past the age when being unmarried could be looked as as normal, as well as Yukiko's own seemingly bashful nature and the strict demands of the head of the family, Tsuruko and her husband Tatsuo (Juzo Itami), one suitor after another falls away, and the social standings of each one seems to drop a tier every time. 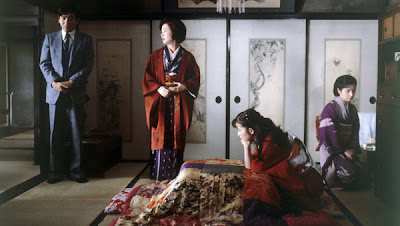 I threw that "seemingly" in before "bashful" when describing Yukiko because I realized I was starting to describe the novel more than Ichikawa's film. Watching his version of The Makioka Sisters the same day I finished reading the novel, I was quite surprised by how freely Ichikawa and co-writer Shinya Hidaka interpreted Tanizaki's book (which Audie Bock, in her essay on the film in the Criterion DVD booklet, describes as the Japanese Gone With the Wind). There are so many characters and intricate connections between each in the novel, and so much tangled Japanese tradition, that Ichikawa's adaptation might be described as brutal. Working on a tight budget, as Bock notes that Ichikawa was, means that the reader of the novel will not be seeing either the flood or the typhoon, and whatever changes wrought by those events will have to be arrived at in a different way, or not at all. But this is not what makes Ichikawa's work as an adapter of Tanazaki interesting -- this is merely the kind of streamlining that must always be managed when tackling a project this size. What’s interesting are the fundamental changes Ichikawa brings about to central characters, and watching the film I was led to wonder about the equivalent American reaction to such a situation. Over the last few decades, the very idea that a beloved American novel might be adapted at all, let alone altered in the way Ichikawa alters The Makioka Sisters, has been a guarantee that the filmmaker doing the adaptation would be euphemistically flayed alive. Imagine if a director set Catcher in the Rye in Cleveland and maybe you’ll have some idea. 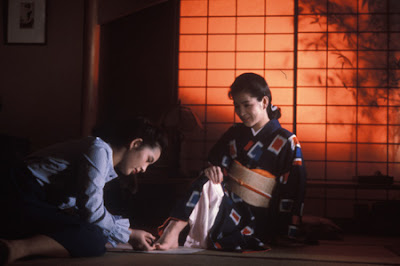 But nobody in America has read Tanazaki’s novel, so Ichikawa was able to take Yukiko’s bashfulness and transform it into something quite a bit more seductive and knowing, with an outward appearance (only?) of reticence. Carried along with this change is Sachiko’s husband Teinosuke (Koji Ishizaka) who, quite unlike the hard-working, disciplined, but wary man in the novel, finds his life potentially ruined by his sister-in-laws seductiveness. This choice completely shifts the focus of the story’s sadness, which in Tanazaki’s novel finds a variety of outlets but is located primarily in the other characters' inability to match the quiet, withdrawn Yukiko with a husband, and the dangers of what Tanizaki viewed as the danger of Japan’s outmoded traditions. (Anyway, the air of seduction adds a heat to the proceedings that is absent from Tanizaki, although, despite this being the only novel of his I’ve read thus far, such heat does not seem to have been entirely absent from his work, unless it’s just a coincidence that his novella The Key has been adapted by both Ichikawa and Tinto Brass.)

I could go on. World War II is brewing as the novel opens, and is erupting unseen around the characters by the end, but Ichikawa basically leaves it out. Gone, too, or at least strangely upended, are Tanazaki’s overt critiques of the Japan in which he grew up. I’m tempted to be wildly presumptuous here and wonder if the fact that Tanizaki was born in 1886, and therefore had grown up among those old traditions, while Ichikawa, born in 1915, was entering adulthood at the time Tanazaki, at least, has pegged as the waning days of those traditions had anything to do with the two mens' different approaches(this difference can also be seen – though the source of this might have been practical, and at least one of simple taste – in the terrific synth score Shinnosuke Okawa and Toshiyuki Watanabe, which breaks the film into the modernity Tanazaki leaves hovering over his novel. Anyway, I’d like to note that synth music, which was rampant in films of the 1980s, found it’s true worth in Japanese cinema in a way it never came close to in America). As a result, observe: 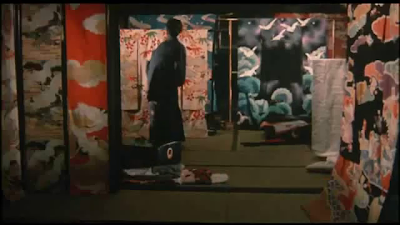 Ichikawa’s film is gorgeously colorful, and the immense beauty blooms not just from the cherry blossoms that the four sisters enjoy visiting together, but the kimonos, a traditional and ancient Japanese garment, they wear. In this sense, the film’s beauty is from the same tradition that Tanazaki chips away at over the course of 530 pages. In the novel, kimonos are frequently contrasted with the Western clothes often favored by Taeko whose rebellion against tradition practically destroys the family, and is a kicking out at old Japan. But Ichikawa divides her impropriety and shares it with Yukiko, and extracts the massive lump of resentment and disappointment and drops it into the lap of one man.
Ichikawa’s The Makioka Sisters ends brilliantly. I won’t say more, but it’s fairly exquisite the way he lays the groundwork for this moment, and how suddenly the heartbreak flows from a reasonably unexpected source. And in his own way Ichikawa is presenting a view of marriage as it existed, or once existed, in Japan that is almost as caustic as the one Tanizaki quietly uses to poison the end of his novel. I mean “poison” as a compliment, incidentally, but it’s curious, again, about that word “gentle” being applied to Tanazaki’s work. Because if anything, Ichikawa’s progression is one of gentleness and beauty to melancholy, while Tanizaki begins with sadness and moves towards cruelty.
Posted by bill r. at 7:05 PM

I had never heard of this film, this novel, th writer or the director (probably I have a indefensbile lack of knowledge of Asian cinema.) But I found this post riveting, and now I want to get my hands on this disc.

Why thank you, Pat! I can't claim a deep knowledge of Ichikawa myself, having only seen one other film by him, but he, as they say, had the goods. I think you'd like this one. And it's new to DVD, I'm pretty sure!