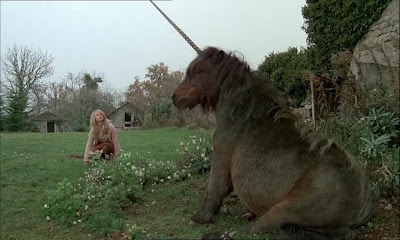 Louis Malle's Black Moon, out tomorrow from Criterion, would rather you didn't assume too much about it. It doesn't necessarily reject any attempts to solve its puzzle, but it knows, and believes that you will learn, that such attempts will be futile.

That's my take on it, anyway. Black Moon is an exceedingly bizarre movie, one of the few works of pure surrealism I can think of from a major filmmaker in the late 20th century. I don't happen to know how closely or consciously Malle adhered to the concret tenets of surrealism, but part of Andre Breton's definition of that movement reads "Dictation of thought in the absence of all control exercised by reason, outside of all aesthetic and moral preoccupation." And in her criterion essay on the film, Ginette Vincendeau talks about Malle using a sort of automatic writing technique with the film, implying that he wrote down or shot whatever occurred to him, free of any concerns about narrative. As I've said, Black Moon feels pure in that way.

So why the tendency by so many, when confronted with a work like this, to break it down in absolute terms? Vincendeau herself does this, stating baldly that Black Moon is the story of a girl's sexual awakening, but it's sort of hard to see how she can be so certain. There is stuff in here about women maturing -- in terms of nursing, but of course in this film the two woman who perform that act are nursing not a baby but an elderly woman -- and there's a unicorn, which tend to find their way into questions of sexual awakening, but the unicorn gets chased by Lily (Cathryn Harrison, the Alice-like figure in the film), and she could be said to be chasing that awakening, I suppose, except that sort of reading gets derailed, or deflected, by Lily's eventual confrontation with the beast, which has to do with which of them is being more cruel to the crying flowers over there.

Black Moon is fascinating in its go-for-broke oddity. Most films and fiction that traffic in surrealism tend to have a pretty clear satiric satiric, and while not every scrap of weirdness can be pegged to that structure, the base tends to support the satire. Black Moon is not like that. There is a war in the film, apparently between men and women (and in fairness Malle did claim that idea came from the social events of the time), but in her attempt to flee that danger, Lily finds herself pretty well removed from it, in a country house occupied by an old woman (Therese Ghiese) and a brother and sister, both also named Lily (played by Alexandra Stewart and Joe Dellasandro). The house is full of alarm clocks and glasses of milk that refill themselves and huge talking rats and naked children and pigs and snakes and badgers. The war can be heard still, sometimes off in the distance, sometimes a bit closer, but not too close. Strange scene after strange scene pile up with no sense of narrative momentum. Even the seemingly climactic moments near the end only seem that way because one's sense of time passing indicates the movie should be over pretty soon. The same events could have occurred within the first half hour without any great impact.

Which is not a criticism. What's engaging about Black Moon is its utter nonsensicality. No film like this will ever escape claims by some viewers that they've figured it all out, but those claims won't alter the film's true madness. 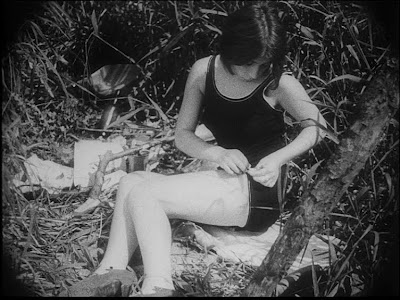 Another film of a type you don’t really see anymore, and also out on DVD tomorrow from Criterion is People on Sunday, a late-era silent film about something that is immensely important to the vast majority of the movie-going public, but rarely dramatized, or not realistically dramatized: weekends. Weekends of frolic, more specifically, and of the mass winding down and lightening up that takes place as people shrug off the burdens of their goddamn jobs and just go to the lake or have a picnic or do whatever else strikes their fancy (stay home and watch People on Sunday, for instance). That really is what the film’s all about, though there is some jealousy-tinged tension among the core group of characters, three woman and two men, one of those men being interested in two of the women, who find him interesting right back.

Those core characters, and everyone else in the film, are played by non-actors, who had never appeared in a film before, and (mostly) never would again. This is part of People on Sunday’s curious history, and rather staggering list of behind the camera talent: directed by Edgar G. Ulmer and Robert Siodmak, cinematography assistance by Fred Zinneman, screenplay by Billy Wilder, which in turn was based on “reportage” done by Robert Siodmak’s brother Curt. Or Kurt, seeing as the film was made in 1930, before those men, and many other people, fled Germany. The film was shot in Berlin, and it’s both tempting and depressing to think things like “Well who knows what that guy did eight years later!” while watching all the happiness unfold onscreen – even the aforementioned jealousy ultimately doesn’t appear to do anyone very much damage – but to think along those lines will get you nowhere, and expose you as a joyless ass. Because of course People on Sunday was not made eight years later, it was made when it was made, by a group of filmmakers it’s almost shocking to imagine together in one room, and who would go on to make one classic after another in Hollywood, many of them of a much darker and more cynical cast than this modest little affair.

Or ostensibly modest, anyway. One thing that struck me was how much the camera moved. It’s often jittery, and just as often clearly attached to some form of conveyance (boat, car, etc.), but it still moves a lot for the era, indicating that in this ode to free time, Ulmer, Siodmak and the rest were nevertheless pushing very hard.
Posted by bill r. at 5:50 PM

I wish there was someway I could "like" this as having seen neither film but enjoyed the piece I have nothing actual to say. Oh, the confusions of this strange, strange internet age...

Thank you, Rod. Next time, you could just type LIKE in all caps. That's what I've been doing.

I've heard of "People on Sunday," and always been a little curious about it, as I believe it was Wilder's very first film credit.

Forgive me if I missed something, but just curious about this as well: how do you get advance access to new Criterion releases?

Pat, I get them because a very good Samaritan gave me the contact information for someone who could provide them. But unfortunately I was asked to zip my lip and not give the information to anywone else, and I said I would.

Further unfortunately, how you go about getting your own contact information, I couldn't tell you. Sorry...

Bill -
No worries, I actaully wasn't asking with the aim to 'weasel in' on anything. (I'm smart enough to know that I'm not in line for any special consideration for my little, low-traffic corner of the blogosphere.) Just thought maybe you had landed some kind of professional gig that accorded you this kind of perk, in which case I would tell you "Congrats!"

No, no pro gig. And I know you weren't weasling, but I do sometimes wonder why this fortune came my way. I only brought it up because if I could hook you up, I would.

I've always liked the idea of BLACK MOON more than the actual experience of watching it. I enjoy the set-up, but it's a little too ponderous for my liking, even if it is relentlessly "weird". Not familiar with PEOPLE ON SUNDAY, so thanks for the introduction. I like your perspective.