My Head is a Funny Kind of Head 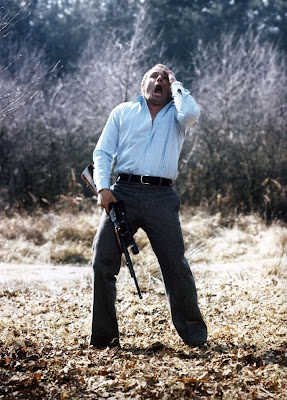 A little while ago, I was having a conversation -- well, an argument, and a weirdly heated one, at that -- with somebody about the state of modern science fiction films. It is my contention, and I've said this before, that science fiction is about the most debased genre in American films today, with only a handful -- A.I., Moon, Blade Runner, and, er...others -- from the past few decades actually qualifying as genuine science fiction films. Most are gussied up action films. And, as I have indeed said all this before, I don't really want to bore you with it again. But I'm convinced it's true, anyway, so encountering any true SF films is a real treat for me, and something to be celebrated, even if the film in question lies outside of the vague timeline I've laid out.

Not only does the film I have in mind fall outside of that timeline, it falls outside of the United States. The film is World on a Wire, made for German television in 1973 by Rainer Werner Fassbinder. It's the story of a man named Fred Stiller (Klaus Lowitsch), a computer programmer whose direct superior, named Vollmer (Adiran Hoven), on a massive project that involves creating a version of our world on a virtual plane, has recently died, mysteriously. Stiller is picked by the head of this project, Herbert Siskins (Karl Heinz Vosgerau) to take over, but after Gunther Lause (Ivan Desny), another friend and co-worker, literally vanishes just before he was about to tell Stiller why Vollmer was acting so strangely in the days leading up to his death, and what he believes Vollmer discovered about the giant, world-encompassing computer called Simulacron, and subsequently nobody seems to be willing to admit that such a person as Lause ever existed, Stiller suddenly finds himself quite possibly in the same deadly situation and broken frame of mind as Vollmer. 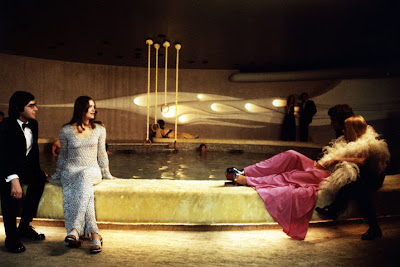 World on a Wire immediately precedes Ali: Fear Eats the Soul on Fassbinder's filmography, and in some pretty obvious ways -- subject, length, scope -- it could not be more different. Except it never feels different. To begin with, there's a bit of a "the gang's all here" situation, with Fassbinder regulars and associates Ulli Lommel ( a filmmaker himself, with such credits as the Fassbinder produced, and extremely Fassbindery-in-general Tenderness of the Wolves), Margit Carstensen, Kurt Raab (able to look pitiful or sinister at will) and El Hedi ben Salem all making appearances. This pales, however, next to the sense that World on a Wire takes place in the same world as every other Fassbinder film, a world of intensity and cheapness (by which I do not mean, even in the aesthetic sense, bad) and sex and death and bizarre reactions, sudden outbursts, madness. Check the sudden and manic kicking in of a TV screen in Ali: Fear Eats the Soul against something like Stiller's reaction to the sudden and devestating collapse of cinder blocks in World on a Wire. The latter is an extreme example, but in neither case can the behavior really be considered normal.

World on a Wire is based on a novel by American science fiction author Daniel F. Galouye called Simulacron-3. It's a novel I haven't read, but wish I had, not least because I'm having a hard time wrapping my head around the fact that it served as the source material for both World on a Wire and Joseph Rusnak's The Thirteenth Floor from 1999. That film is a tedious mess; World on a Wire is a mess too, maybe, I guess, but a glorious one. Rich, even novelistic (the 3 1/2 hour running time no doubt helps on that end) in a way filmed entertainment of any kind is rarely able to be, and truly eccentric in a way that only films can really manage. Throughout Fassbinder's film, characters in the background, or even in the foreground, will suddenly turn vacant when they're not being spoken to, or in order to get from one place to another people will unnecessarily walk to the background and behind a wall, looping around the other side and back into frame. Then of course there's the Marlene Dietrich impersonator taking part in a cabaret act about Nazis, and the giant shirtless chef muttering about his patrons being "barbarians" and the like. The thing about those vacant faces, though, is that this is all groundwork for certain story reveals later on. It's not just needless oddity. 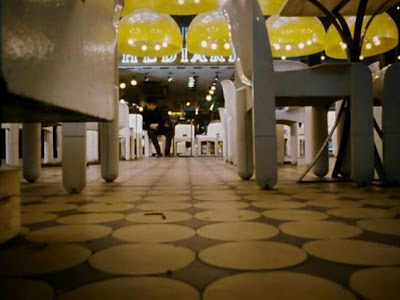 And if you’re the kind of person who likes to do things like eke out a film’s themes, then you’ll probably be happy to hear that in World on a Wire Fassbinder hits the trifecta of identity, reality and existence. The problem I have with these as themes is that usually the discussion begins and ends with someone pointing out “That film is about the nature of reality.” But World on a Wire makes all this stuff immediate and vital and particular to the characters in the story. World on a Wire functions as both a science fiction film and as a thriller, and it is an endlessly suspenseful piece of work. And the nature of that suspense grows out of the question of what is the reality of Stiller, and how does that reflect on his view of himself and his world as actual things? Add to that what, if anything, would it mean if that existence suddenly ended? Identity, reality and existence aren’t just themes; they’re plot. And they’re not just plot; they’re life and death.

As with most great films, I’m a point where it’s difficult to describe why certain details elevate World on a Wire over so many science fiction films, old or new. For instance, intriguing questions linger in my mind, such as “In the world that Fassbinder has created, where, or even what, is Rome exactly??” The lack of answer is appealing. Or on a maybe more abstract level, why was it such a rush for me that the ending of the film first cuts between two realities, or ideas of reality, both true, one disastrous, and then ends with a build to Gottfried Hungsberg’s simple guitar theme over the closing titles, a theme that reminds me of the opening of the Beatles’ “Sun King”? Such a rush that I was led to rewind and watch those few minutes again? I couldn’t really say. But it was indeed a rush, as were the preceding 200 minutes. 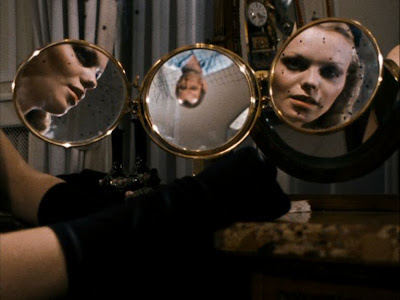 World on a Wire hwill be screening twice at TIFF Lightbox in the coming days. First tomorrow, June 17, and again on Sunday, June 19. If you can, you absolutely should.

And you know I'm with you on the sci-fi thing, both thinking it the most debased (horror would be but it's more popular and classic sci-fi/horror like the James Whale Frankenstein movies is weighted more to the horror so it ends up elevating horror a little more) and on it being very misunderstood. I swear, you could throw a laser beam in Kramer vs. Kramer and that's all it would take for some people to then qualify that movie as sci-fi. It seems any single, miniscule element that even slightly "futuristic" in design, and it's a sci-fi film! Not an adventure film or an action film but a sci-fi film. I mean, look, it's got a laser!

Yeah, this is great. And odd, and thematically rich, and just packed with wonderful images and details. As you suggest, lots of films claim to be about "the nature of reality," but this one really is in the deepest sense. I think it's interesting that it sets up this complex thriller plot that the characters seem to care about less and less the more they discover about it, and the more obsessed they become with other levels of reality. I see it as a very interesting metaphor for religious conviction and belief in heaven: worldly matters seem to melt away as the emphasis shifts to larger metaphysical questions.

Mostly, I love that it's such a visually exciting film with such weighty ideas at its core. It's not exactly typical Fassbinder (whatever that is), but it's certainly a fantastic movie.

Greg - You'll find this amusing. The argument I mention at the top of this post started (this all took place on Facebook, by the way) when I said that CLOSE ENCOUNTERS was another of the few, true SF films made in my lifetime. Another guy pops up to call shenanigans on that, and said CLOSE ENCOUNTERS (which he hates) is more of a fantasy film. Much closer to true SF in his opinion? PREDATORS.

Ed - Sheesh, your point about it being a metaphor for heaven is absolutely dead on, and more than likely something Fassbinder had in mind -- why didn't it occur to me?? It certainly ties in strongly with the final images, as the happy reality could function easily as heaven, especially considering the other reality we're privy to.