Brief Thoughts on The Descent Part 2 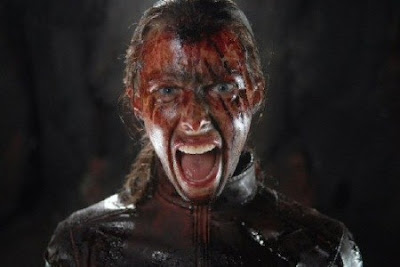 Brief Thought #1 - In The Royal Tenenbaums, Owen Wilson's Cormac-McCarthy-if-he-was-bad writer Eli Cash describes his novel Old Custer by saying: "Everyone knows Custer died at Little Bighorn. What this book presupposes is, maybe he didn't?" Such is the philosophy of The Descent Part 2, directed by Jon Harris, and the continuation of Neil Marshall's excellent 2005 horror film. In the original, Sarah, played by Shauna Macdonald, was left in an underground cave with her mind broken and surrounded by ravenous, blind, pasty-white creatures. That was the original British ending, anyway, though when the film hit the US a new ending was shot, one that was less ambiguous and a bit more uplifting. What the British-made sequel is saying, bascially, is that the reshot ending is canon, because Sarah is out of the cave and running around covered in blood. Interestingly, in the DVD commentary Jon Harris claims to have never seen the reshot ending of the original, on which he worked (Marshall is a producer of the sequel), so I guess he absorbed it through osmosis. Also, that chick Juno, the one Sarah axed in the leg because Juno slept with Sarah's deceased husband, leaving her bleeding on the cave floor to be swarmed by the creatures? She's alive, too! So, since The Descent Part 2's plot revolves around the attempted rescue of the five women from the first film, Harris and his writers have approached the maxim that all sequels should be the same, but more of it, by stopping after the words "the same".
. 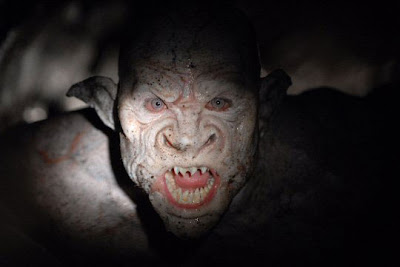 Brief Thought #2 - There's some pretty good stuff in the sequel involving Sarah and the crew of rescuers stumbling across the dead bodies of the characters from the first film (although I was able to remember the specifics of the earlier scene in only one of these cases). The first time this happens they find the body of a woman who has been devoured from roughly the sternum down, and Sarah -- whose memories of what transpired before are slowly returning -- mentions something about being attacked by creatures or animals or something. One of the rescuers, the designated Stubborn Leader played by Douglas Hodge, while standing directly over this eviscerated corpse, responds with "There's nothing down here that could have done that!" Given the evidence to the contrary that he has ready-to-hand, one is tempted to think that the filmmakers were awfully stubborn about keeping this character stubborn.
. 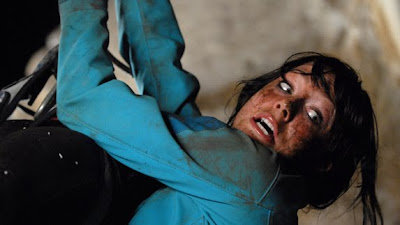 Brief Thought #3 - The Descent Part 2 is a low-budget affair, through no fault of its own. What it lacks is any flair or personal style, or even style borrowed from its predecessor (other than borrowing the same shot from The Shining that Neil Marshall borrowed for his film). This is especially evident in the first 40 minutes, in other words, all the stuff that happens before the creatures attack again, all of which is awfully limp and plodding. But eventually all hell breaks loose, and there's a certain suspense and energy here. But one nicely imagined set-piece is badly undercut by the film's low budget, or rather, by the fact that the filmmakers refused to acknowledge that low budget and find another way to shoot it. The offending bit involves two people falling into a seemingly endless pit of blackness, to their death, and it looks as though the two actors were filmed grappling, and then that image was reduced in increments with the hopes that this would effectively mimic the image of two people, seen from above, dropping out of sight. Instead, it looks like they're shrinking. I believe the TV show Land of the Lost was fond of this kind of camera trickery, but in any case it reminds me of a saying that I believe is an old one, and if it's not it should be: If you can't do it, don't do it.
. 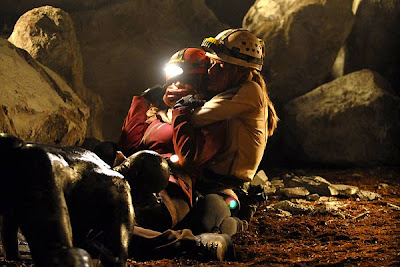 Brief Thought #4 - What I just described above in Brief Thought #3 would have to count as the climax of that particular scene, and the idea, narratively, behind it is a good one -- I'd like to stress this. Unfortunately, Harris seems intent on training his audience to not care about anything or anybody, because whatever emotion he'd created in the scene is almost immediately obliterated by the coda that follows. It's rather annoying, nor does this philosophy end there. If a given film's structure could ever be categorized, or succinctly described, the structure of The Descent Part 2 could be described this way: Nothing Matters. That's what our movie's about. It's about Nothing Matters. Which, theoretically, is actually not a bad idea for a horror film to be based around, but The Descent Part 2 wants us to feel certain emotional connections, then wants to slap us in the face for feeling them, but also wants us to walk away from the film still feeling them. Is this an achievable goal? I don't know, but it's sort of amusing to hear the screenwriters talk, as they do in one of the DVD extras, about how Sarah's character goes from vengeful in the first film to empathetic and sacrificing in the sequel, when we already know, having watched the film, that all that empathy and sacrifice meant precisely jack-shit.
. 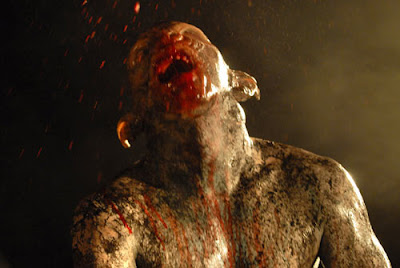 Brief Thought #5 - Also, about 80% of the characters who die in this film -- creatures and regular folk alike -- die by having their throats ripped out or punctured. I mention this only in passing.
Posted by bill r. at 7:18 AM

I'm kind of excited about missing this. I don't know, should I not watch it this weekend or not watch it next weekend? Actually, I'll probably just not watch it everyone weekend from now until somewhere around the end of time.

Thanks for the review. Totally looking forward to avoiding this.

In my excitement to not see this I wrote "everyone" instead of "every." That's what happens when you've got this level of anti-anticipation.

Greg, when you don't watch this film, pay special attention to how good the ending isn't, and how it doesn't single-handedly justify making a sequel to THE DESCENT. You'll be amazed!

Well, I never thought the original was any great shakes to begin with, but since this one didn't have me rolling my eyes at the amateur-hour quality of the editing like Marshall's flick, I liked it better, even if it is basically just a more competent reshoot of the first movie.

Funny you say that, since this one was directed by the editor of the first one.

John, I'd be curious to know which editing choices in the first film bothered you so much.

So I guess with this and SANCTUM (in 3-D) one can say it's been a great year so far for bad cave movies. Too bad the original DESCENT wasn't shot in 3-D.

I reviewed this months ago and got zero responses. Now you have 8. Unfair! I will be avenged!

Aw c'mon, man! I don't get that many comments, so don't make me feel bad about the few I DO get!

Wait- what was that? Did you hear that? Downstairs? In the attic?

I'll give you a hint.

This movie is pure trash. Jon Harris should NEVER direct another movie. And someone should give him an inkling of what suspension of disbelief is. I mean, how many ways can one persons blood fall into another persons mouth? It's his worthless parlor trick for the movie. (Along with the moronic cesspool, everyones throat getting ripped out, and the movie being just plain garbage.)

Yeah, pretty bad overall, and this coming from someone who enjoyed the original for the most part. Explain to me again why these creatures evolved to be blind when their entire food source comes from above ground....in the blinding sunlight no less? And after these monsters have already killed several people the cop handcuffs Sarah to himself for.....what purpose? 'I brought you down here, I'm bringing you out' or some horrible dialogue to that extent. Did the writer for this movie actually get paid? And killing a super strong monster with razor claws with a hairpin? That's too much. Who got blown to get this movie made?