.
Two men are traveling with death, both completely oblivious of that fact. One is a monster, the death is seeped into his skin and blood and lungs, though he can’t feel it, as he chases through the streets of New Orleans looking to validate his ignorance. The other man is a punk, a loser, who believes that the death he holds in his hands is actually money, and so he will protect his own death with all his power. Some twenty minutes after meeting him, we will hear him cough, and we will know he is already dead.
. 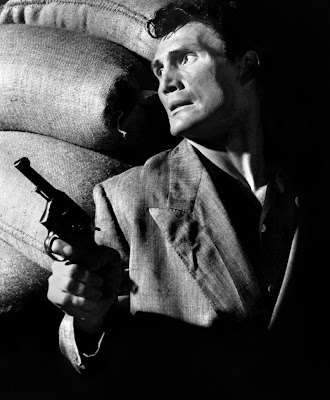 The first man, the monster, is Blackie, played by Jack Palance in Elia Kazan’s Panic in the Streets. His death is the pneumatic plague, and it traveled over the ocean to meet him. A man he murders early in the film is discovered by the coroner to be carrying the plague, and so the ensuing race by the authorities – headed up, in this instance, by a Navy doctor played by Richard Widmark – to catch a murderer doubles for, and is in fact superseded by, the need to find the new source of this wheezing death, the man who caught it from the man he killed, before it can be breathed from man to man and woman to woman, and bring down the entire city.
.

The punk is Vince Ryker, played by Vince Edwards in Irving Lerner’s City of Fear. His death is not an ancient germ but a canister of concentrated Cobalt 60, radioactive material ranked as one of the deadliest substances on Earth. Ryker believes it to be heroin – as if that was somehow better – which he plans to sell, and on which he pegs his deluded hopes of a bright future. His future, any kind of future, good or bad, was cut off at the knees the moment he touched that canister, but he protects it like a baby, guards it against theft, and waves the canister’s invisible buzzing clouds that have already killed him at all the other punks and losers with whom he deals, and at anyone else unfortunate enough to be nearby.
.

Blackie seems to enjoy killing people, which makes his responsibility as the carrier of an entire city’s death one that is well-suited to him. In fact, by the end of Panic in the Streets, Blackie will have killed more people consciously – with his gun or his bare hands – than the pneumatic plague, which has the potential to eradicate hundreds and thousands in a few days, manages in the same amount of time. A couple of Blackie’s victims he must share with the plague, as they are deeply sick men when Blackie shoots them, or, in one case, pitches the make-shift stretcher on which the man lays over a staircase railing, dumps his slack, delirious body into the depths like a bucket of fishguts tossed off the side of a boat. Blackie is happy to do the plague’s work, or speed it along, or take it down unexpected alleys. The pneumatic form is only one type of plague, after all, only one of many.
.

Panic among the citizenry, the authorities know, is to be avoided if at all possible, but a certain amount is inevitable once, paradoxically, the need to protect that citizenry must include informing them of danger. This danger is what Vince Ryker cradles to his crumbling chest with withering arms when some among the strangers he meets connect him and his deadly canister to the news reports they’ve been watching. Now he becomes a leper who must be dealt with swiftly, his disease taken from his hands by men with gloves who wear rubber suits.
.

Blackie, the monster, seems to fare better. There is a cure for one of the plagues he carries inside, and beyond that he faces a lengthy incarceration. Perhaps that’s fine by him. Perhaps he can make that come out to his favor in some way. His work is not yet done.
------------
This post has been part of the For the Love of Film (Noir) blogathon, hosted by Ferdy on Films and The Self-Styled Siren.
Posted by bill r. at 10:08 AM

Excellent post! Never thought of plague noir as a sub-genre before, but I must say that Panic In The Streets is still my favorite Elia Kazan film.

Mine too. And thanks, Dario!

This is beautifully written. I haven't seen the film, but it sounds full of shadows and symbolism. Well done.......

Thank you very much, Tinky, I appreciate that. And both films are excellent, so I hope you're able to check them out.

Another great post, Bill! I haven't seen the Vince Edwards film, but I've got "Panic In The Streets" and in fact just watched it again last month...Kazan's best film, in my opinion. I hope you manage a review of "D.O.A", one of my all time favorite noirs.

Sorry for the lateness of my reply, Anonymous. First, thank you. Second, as you can see, I didn't write about DOA, although, coincidentally, I've had it saved in my DVR for a few weeks now. I may yet write it up, but obviously not for the blogathon.