You're Old and You're Ugly and You Killed Me 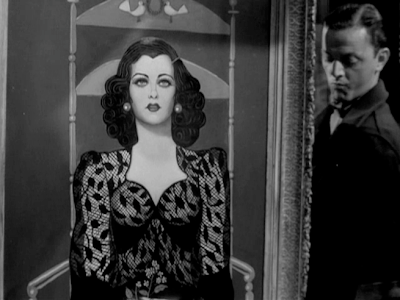 Starting today, and running through April 6, TIFF Cinematheque is running a restrospective called Hollywood Classics, focusing on a wide variety of film noir, "both canonical and cult, celebrated or unjustly obscure, presented as often as possible in new, restored or rare prints", as their website describes it. Clicking on that link will reveal which films we're talking about -- Out of the Past for the canonical, the recently restored The Prowler for the obscure, and so on -- and clicking on the individual film titles will give you their showtimes and dates. A fine line-up, I think you'll agree, one that nicely corresponds with the upcoming For the Love of Film (Noir) blogathon hosted by Ferdy on Films and The Self-Styled Siren, which itself is being done in support of Eddie Muller's Film Noir Foundation, saviors of the aforementioned The Prowler. So this all works out very neatly, I must say.

I do take mild issue with TIFF's description of Fritz Lang's Scarlet Street, the penultimate film in the series, as "genre-defining". They also call it a "masterpiece", which I have no problem with, but I watched Scarlet Street recently and though the 1945 film comes relatively early in what is generally called the "film noir cycle", Lang seems to be employing something of a scorched earth policy in regards to tone. Much of Scarlet Street plays very close to a light-hearted comedy of unrequited love and con artistry (with a sadness at its heart, of course, because what are we to do when Edward G. Robinson's Christopher Cross reassures his own wife that he's never seen a naked woman before, other than chuckle so as not to feel his desperate sadness too sharply?), but that's before the plane slams into the mountain. There are also the unpredictable, deliberately misleading questions of who will kill who and when and why and what will happen then, the posing of and answers to such queries eventually combining to make Scarlet Street a film that keeps the viewer uniquely off-balance. The point being, I've seen few noirs that so happily upset the viewers handle on its proceedings like this one, and had Scarlet Street defined the genre we might not have quite so many traditions within film noir that would allow it to be defined in the first place.

Whatever, this is why TIFF Cinematheque is showing the film in the first place (a full review of which will appear here closer to its actual screening dates), as well as the more truly defining Out of the Past, and several others. If you can make it, and if you can you'd better, don't hesitate to do so.

I've been half-assed considering Scarlet Street as my post. I like your thoughts a lot and agree. It's a very interesting movie.

Interesting to the point of being weird, I'd say, but great.

I think the "interesting to the point of being weird" is part of its greatness.

I'm going to do a post on Scarlet Street because my wife and I saw it at the AFI a few months back, when the very Film Noir retro you're talking about was run. It wasn't until I saw the link you sent me that I realized, "Hey, this whole thing was at the AFI four months ago."

We picked Scarlet Street and the "expert" who spoke beforehand said much the same "genre-defining" stuff that I will completely ignore in my post. I put "expert" in quotes because they always seem to be rattling off something they read in a "History of the Movies" book at these screenings and Laura forever turns to me and whispers, "Why don't they get you to do these things?" Why, indeed! Okay, sorry for the ego trip. Anyway, look forward to writing it up and talking about the big theatre experience with it.

Did you ask anyone at AFI why they didn't ask you? I would have, and then if I saw the expert I would have pushed him over!

Seriously, the experts at these special showings always seem to know about half as much as your average movie blogger. Oh well. Next time, I'll push him over.

Make sure that he falls in a pile of...garbage? Poop? Or into water, if you're on a pier. Just play with the idea, have fun with it.