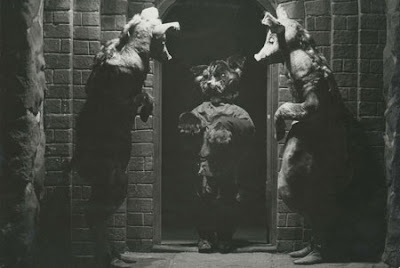 Häxan (d. Benjamin Christensen) - The above still pretty much says it all, doesn't it? Christensen's 1922 documentary/sociological essay/horror phantasmagoria would find itself very lonely if you were to try and place it within a genre. Occasionally, and tediously, didactic, Häxan is nevertheless gripping for the fact that it broke all the rules of documentary filmmaking before there ever was such a thing to break, and for its deeply bizarre and unnerving horror imagery, which take the form of Black Sabbaths and devils and witches and so forth, as Christensen chronicles the history of a particular kind of supersitious thought in the Middle Ages. What's curious about these images -- which range from the plain creepy, to the ludicrous, to the darkly sexual -- is that they're filmed with such verve and creative energy that they almost convince the viewer that those witch-hunters from hundreds of years ago were maybe on to something. As a thinker, Christensen cares to teach us how not to revert back, in our own modern and self-righteous way, to old and fiendish habits; as a filmmaker, however, he was far more interested in how the world looked through those superstitious eyes.
. 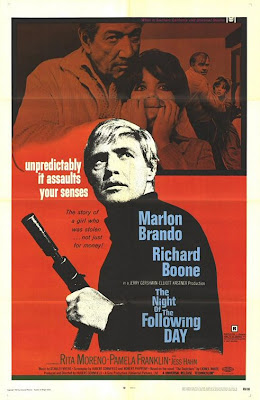 The Night of the Following Day (d. Hubert Cornfield) - Cornfield's DVD commentary track for this film is, for reasons it would be crass to explain, impossible to listen to. From a very shallow point of view, this is a shame, because, frankly, I'd like an explanation. For much of its length, The Night of the Following Day is a lean, precise, and vicious little crime thriller, about the kidnapping, in France, of an English heiress (Pamela Franklin) by a group of American criminals, led by Marlon Brando and Richard Boone.
.
First thing's first: despite the fact that, in his parade of tight all-black get-ups, Brando looks like he's constantly on the way to, or just back from, dance class, he's absolutely terrific, playing the smartest and most moral of the kidnappers with the ease of a top-class character actor. And the role of "top-class character actor" in Night of the Following Day is filled by Richard Boone, as Satanic and horribly convincing as he's ever been (by the way, Rita Moreno, as the female kidnapper, is also excellent, and she gives one of the best stoned-out-of-her-gourd performances I've seen).
.
But after a note-perfect climax (directed, I've gathered, by Boone, at Brando's insistence, due to Brando's belief that Cornfield was incompetent; in fairness the vast majority of the rest of the film doesn't bear this out), Cornfield throws in a loony-bird twist that caused my brain to silently rage "What the dick!? This was all a...wait, no, that can't be it. What? Why!?" In short, the film is like the worm Ouroboros, or the symbol for infinity, or a Moebius strip, and all that, but to no good goddamn purpose. The last few minutes of the film -- which supposedly Brando strenuously objected to -- have the strange distinction of neither ruining the ending's impact and making the viewer wish they'd been cut altogether. Narrative experimentation gone awry, is what I'm talking about, but the lion's share of the film is still well worth anyone's time.
. 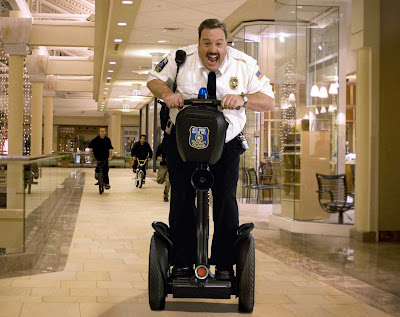 Paul Blart: Mall Cop (d. Steve Carr) - I implied there would be films such as this would pop up now and again. And I suppose I could pretend that my wife and I don't think Kevin James is funny, and that we didn't rent this one night because we both really wanted to see it, and that we didn't both laugh often enough at the zany antics of an overweight and socially inept mall cop who finds himself defending his turf (a mall) against a group of gun-wielding robbers (burglars?) that I eventually picked it up at a Blockbuster sale. I could do all that, but it would be a lie. I think this movie's kinda funny. Fuck you, you jerks!
Posted by bill r. at 7:41 PM

You're right that Haxan is fascinating for the way it breaks all the documentary rules, with its curious mixture of the real, the staged, the narrative and the informative. But what strikes me most about it is all that incredible chiaroscuro photography (thanks, Criterion restoration team!), at a time when most cinematography was still high-contrast starkness. The Danes mastered soft greys on celluloid long before anyone, perhaps via some deal with a Lutheran Devil, and comparing any frame of Haxan with a frame of any other movie from the same period is striking.

As for Night: So I take it the commentary is not as entertaining as the one on that *other* group-of-kidnappers thriller, the 1981 VENOM, which showcases an endlessly amusing series of anecdotes about the fights between Oliver Reed and Klaus Kinski, drily delivered by the sardonic Piers Haggard.

In the liner notes for the Criterion disc, Chris Fujiwara says it's a shame that HAXAN is so little known, as it's bound to appeal to new generations far more than most silent films, and I'd say he's probably right. One of those would be the sheer variety of the images, which obviously has a great deal to do with the photography. I'm by no means an expert on that era of film (or any era, if I'm going to be honest), but I've never seen anything like HAXAN in terms of what you're talking about, outside of Dreyer. Which, well, there you ago: the Danes.

So I take it the commentary is not as entertaining as the one on that *other* group-of-kidnappers thriller, the 1981 VENOM.

It might be. I don't know. The problem is that when Cornfield, since passed on, did the commentary, he had one of those electrolaynx devices, or at least badly needed one. It was just very uncomfortable to listen to, so I didn't.

Mall Cop, huh? You know, no one would take away your cinephile badge (you do have one, right?) if you just neglected to mention you own movies like this. I mean, come on. I can honestly say every single DVD I own is a highly praised five star masterpiece. Now if you'll excuse me, I have a lunch date with Revenge of the Nerds.

Greg, the rules are the rules. I set them, and I'm sticking by them. Also, there's a certain pleasing symmetry in beginning this post with HAXAN and closing out with PAUL BLART: MALL COP.

I would never own REVENGE OF THE NERDS. You should be ashamed.

Actually I don't but it's on Netflix Instant now and I couldn't resist watching it again. I have, however, owned some real crap in my time but most has found its way to the recycle bin at this point and for the last several years of tight budgeting, I haven't bought many DVDs and when I do, they're keepers anyway. So, in the end, tight budgets make DVD collections classier I guess.

Also, Netflix instant and i-tunes rentals and Amazon rentals have made buying less important for me so again, when I do it's usually a cherished film rather than a throwaway title.

But in the past, I have owned tons of crap, especially in the 90's when the only way I could see movies on DVD was to buy them because no one was renting them yet.

"Unpredictably It assaults your senses" : best poster blurb ever.
Does the film live up to it, Bill? Does it?
Can it?

Greg - You sound like a Communist to me. I can't say I'm surprised.

My senses were assaulted unpredictably and frequently.

Yup, Dreyer is exactly who I was thinking about. I remain baffled as to what their cinematographers were doing that no one else was. And yes, you do indeed need to see VENOM, if only for the spectacle of two of the greatest egomaniacs in the history of cinema smacking each other around while Sterling Haydens goggles at them through a marijuana haze.

I've actually listened to Cornfield's Night of the Following Day commentary twice. (I also made it through his Pressure Point commentary.) The scene Brando directed was the conversation between his character and Jess Hahn's near the end of the picture. Cornfield's quasi-surrealist ending, with the bowler hat and umbrella on the beach, was done in homage to René Magritte. Cornfield called Moreno the best actor he ever worked with. He also said Brando was drunk on the set on a couple of occasions, but was professional enough to deliver a competent performance.

It's a weird film for sure, but it holds some special value for me.

I thought Boone directed parts of the picture, not Brando. Oh, what do I know.

So Cornfield directed the whole beach scene with Brando and Boone? That was fantastic stuff, and further illustrates that Cornfield was nowhere near incompetent.

I honestly have no beef with the movie, outside of that time-loop idea at the end. Which, granted, I hate, but it doesn't kill the whole thing for me. Up until then, I thought it was damn good.

Oops! My bad: Boone did direct the conversation between Hahn and Brando.

Plunder Road is a Cornfield movie worth seeing. Low rent 50s noir. It was released on VHS, but so far not on DVD. I think there are several films that were released by Republic Pictures Video on VHS that still haven't made it to DVD. Shack Out on 101 and The Bullfighter and the Lady also come to mind...

You're always recommending old movies that I can't see!! Well, I did manage to catch SHACK OUT ON 101 on TCM. Weird, weird movie. I'd like to see a good DVD of that one some day.