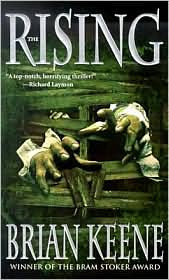 Raindrops fell like tears from a black tar god -- or drops of rancid milk from a dead mother's breast.

That line comes from The Rising, the first novel by horror writer Brian Keene, and when I read it, mere minutes ago, I had to ask myself (since Keene wasn't available to ask personally): "Well, which is it? Tears from a black tar god and rancid breast milk sound like two pretty different things to me. Presumably, one is black and the other is white, or off-white. So is the rain black or white, or just normal rain-colored? And if that's irrelevant to you, then how can rain fall 'like breast milk'? I can allow that tears from a black tar god might fall like rain, because gods are not only big, but tend to be located above-ground, so I'm fine with that. But when has breast milk ever rained down on anything?"

It appears to me as though Keene simply wasn't satisfied with black tar god tears standing in for rain, and needed another image that involved liquid -- preferably gross liquid, as that seems to be his MO -- to pair it up with, so that readers could take their pick. But it's terrible writing. It's a meaningless cluster of similes that also indicates that you've placed yourself in the hands of a writer who is, among other things, indecisive.

She was safe for now.

Or was she? What if there was a zombie in here with her, lurking in the darkness, waiting to lunge out and eat her?

I don't know, Brian Keene, you tell me. You're the guy who wrote the book. But thanks for reminding me that this is a zombie novel I'm reading. I'd very nearly forgotten! And I do also appreciate this window into the mind of the character. Knowing that she's worried about being eaten by a zombie really brings her alive.

Just a few paragraphs down:

...she couldn't see her ears, but she knew they were scarlet.

Hey, I can't see my ears, either, unless there's a mirror handy! It's like I know this girl!

You get the idea. This book is just grade-school bullshit. I'm writing this out of an immense feeling of frustration, which coincides with a bit of introspection regarding why I seem to want to continue to cling to the horror genre. The vast majority of it does me very few favors. And I certainly can't find my way to thinking of myself as a member of the horror fan community, because it's utterly beyond me how that group can embrace and praise a great writer like Thomas Ligotti, while doing the same to someone like Keene. The Rising is an award-winning book, for God's sake. Horror fans, by and large, seem to be completely unable to tell good writing from bad, and I'm getting a little fed up with it.

Although, hey, here's something interesting. One of the authors who provided a blurb for The Rising is Richard Laymon. "A top-notch horrifying thriller!" he proclaims. Except that The Rising was first published in 2003, and, erm, Richard Laymon died in 2001. So...I don't really...

"Horror fans, by and large, seem to completely unable to tell good writing from bad, and I'm getting a little fed up with it."

Although my experience with horror literature basically begins and ends with Edgar Allan Poe, I feel kinda similarly about horror movie fans. I love horror movies by and large, and there are a lot of people doing good work in that field, but for the most part whenever I meet a self-proclaimed "horror fan" they tend to treat the genre more like a drug; something to get their blood pumping and their adrenaline going, rather than an art form. And I'd argue that this has lead to a lot of the boring excess that we see today.

Krauthammer - Yes, that's absolutely true, and horror literature fans and horror film fans dovetail in another way: the majority of horror writers these days were inspired by the shitty 80s movies they grew up with, as opposed to writers like Poe, Lovecraft, James, Aickman, and so on. And the fans want to read books that are like those shitty movies from the 80s they grew up with, so in that sense the relationship works out quite well. But increasingly I want no part of it.

I've always been a huge horror fan, and I can barely think of a single example of long form horror fiction of any merit.

Aside from Stephen King, whom I tired of in High School, I'm having a hard time even thinking of a contemporary horror novel that I ever bothered to read all the way through.

Knarf Black, yes it counts (although I have to admit to not liking that one, either). It's absolutely true that horror thrives in the short form (even writers whose awful novels I've slogged through have turned out decent stories), but I think good horror novels exist. The Exorcist, Song of Kali, Flicker, The Haunting of Hill House, Conjure Wife and bunches more. I'm not saying it's common, but such books do exist. It's largely the post-King writers who are killing the horror novel.

I can't see the back of my head but I know it's covered with hair. By the way, I'm typing this comment nervously as their may - or may not be - a zombie in here with me. There could be. Then again, there could not be.

If you think those examples are funny, try this one, from chapter 6:

"Ooo ayyk! Yaaayy!"
Baker removed the wet rag from his forehead, studying his benefactor. His age was indeterminate, somewhere between fourteen and nineteen, Baker guessed. Judging by his facial features and deformities, the boy suffered from some form of retardation. Baker couldn't determine what type.
_____

And "The Rising" is easily Brian Keene's best novel.

So Brian Keene thinks that "indeterminite" means pretty much the opposite of what it actually means. Also, hey, that's some good job, editor.