If You Haven't Seen this Performance...

...you should. And by "this performance", I mean Stephen Graham in Shane Meadows' This is England. When the film came out a couple of years ago, all the praise I can remember reading about it seemed to revolve around the performance by then 13 year-old lead actor Thomas Turgoose, and make no mistake, that kid deserved all the praise he got. He's terrific in the film (his first), but when Stephen Graham (who, until I finished watching This is England, I was referring to as "the guy from Snatch") makes his first appearance as Combo, the skinhead who brings bigotry into a formerly benevolent group of other skinheads and punks, this movie is on fire. 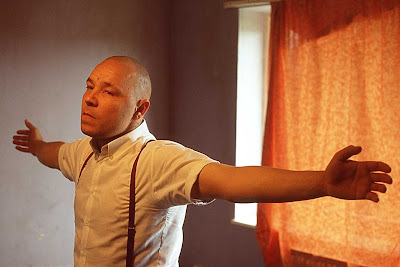 Skinheads and neo-Nazis have, over the past decade or so, threatened to take the place of the mentally challenged character as the kind of role that gets an actor noticed, who lets him froth at the mouth while showing the wounded heart underneath -- see Russell Crowe in Romper Stomper, Edward Norton in American History X, and Ryan Gosling in The Believer. In short, without much effort, the genre was getting a little tiresome. And to one degree or another, I liked all those movies, and thought those were all good performances. And Graham does the frothing-at-the-mouth-wounded-heart business as well. So, there's nothing really new about the character or the story. But I believed Graham was Combo every damn second, I did not see the wheels turning, I did not see him acting. All I saw was genuine rage and hate and violence and sadness and all the rest of it. Utterly mesmerizing. He has a scene where he lays out his philosophy, and, when he strikes a nerve with Turgoose's Shaun and has to calm the boy down and explain why he said what he said, I thought that here's a guy who could make any kind of hatred sound reasonable, because as far as he's concerned he's not selling snake oil. He's selling what he believes to be right and true. Graham is filled with anger and tenderness, and he's just superb.

This post was going to be about one of the last shots in Angel Heart, which I watched over the weekend, but I couldn't find an image of it on-line, so I'll just briefly talk about it as a post-script.

While the film didn't match what I remember to be the near-greatness of William Hjortsberg's source novel (called Falling Angel), I thought the film was pretty damn solid. But then at the end...that glowing eyed baby. Sweet Christ, is that the worst idea to ever make it into an otherwise perfectly good movie, or what? I can't believe that at no point did anyone say, "Hey, Alan Parker, have you seen the finished shot of the demon baby? Because it is totally dumb as shit. And it doesn't mean anything, so why not just snip it?" Maybe someone did, and Parker told them to piss off or to stick it up their arse or to eat shite or something. Whatever the case, reason and logic died that day.
Posted by bill r. at 5:58 PM

Yes yes yes! I couldn't agree with you more. After I saw this movie I tried to push it on people for his perfomance alone (I like the movie overall, but...).

I think my favorite scene(s) is when he's in the car with a girl and he reveals a lot of his vulnerabilities to the camera when he's left alone by her. (I think I am describing that scene right... it's been two years or so.)

In a way, his performance kinda reminds me of Eddie Marsan's in Happy-Go-Lucky. They are both filled with paranoia and anger but they are able to carry a vulnerability about themselves that takes the character away from the cliches you mentioned in your post.

Where's this guy been all these years?? I mean, other than in Snatch, of course. And This is England doesn't even seem to have done the trick, because he doesn't have anything especially high profile on the horizon that I can see. Based on his work in This is England, Graham has to be in the top-tier of actors working today, and nobody's heard of the guy, or at least they can't name him. And before Sunday, that included me!

You're accurate about the scene in the car, which is another great moment. When he breaks down, he looks so awkward and real, like he can't control his face. And he was terrifying in the scene when they rob the Pakistani convenience store. He was just incredible throughout.

Yeah. It's weird. Looking at his IMDb just now he's been in tons of small stuff that never seemed to surface (maybe he's more successful in England?). But it looks like he's in Public Enemies, so hopefully that will give him a boost.

Also... it says he was in Gangs of New York. I don't have a deep enough memory to try and remember who he was in that movie.

Maybe we should start a Stephen Graham fan club, and we can stalk him, and he'll think we are total freaks!

Yeah, I just saw that he was in Gangs of New York, and I do vaguely remember him (it's not a big role, I don't think). He was also in Band of Brothers, which I LOVE, and I don't remember him at all.

He's got a Dominic Sena joint in the works. Isn't that always the way? The guy does genius work in his native country, gives a breakout performance, and right after that he starts getting cast in probably-awful Hollywood stuff. Garrr!!

By the way, Meadows has a track record of casting people who give magnificent performances in pretty good movies. See Paddy Considine in Dead Man's Shoes.

Yeah! Dead Man's Shoes! That would be a good movie for TOERIFC b/c I remember feeling conflicted over it. I'd like to see it again.

And speaking of This Is England, have you ever seen Made in Britain (w/ Tim Roth) or any of Alan Clarke's other movies like The Firm, Scum, and Elephant? I spouted all of those off in a row b/c they came out in a box set a few years ago. I think Blue Underground put it out. But they are all great. My favorite is Scum.

If you liked This is London you I bet you might like Alan Clarke's stuff. Though, Elephant is a little different. It's a tad experimental in form. It's like a half hour of people shooting each other. I know that sounds terrible, but it was made in response to a lot of the Northern Ireland madness, which I don't know enough about.

BTW... I hope I'm not flooding your post with stuff that is off topic, but you can watch all of Clarke's Elephant online HERE.

I mean, it's not the greatest quality but GEEZ!!! Do you expect me to hold your hand and take you to the video store or something?!?! GAWD!!!

I haven't seen any of those, but I've been interested in checking them out for some time. I know I have The Firm in my queue, and I think Elephant is also available. And I know about Irish history, so I bet I like it more than you!

And I know about Irish history, so I bet I like it more than you!

And according to my dad, I'm part Irish! How embarrassing for me!

Leave Angel Heart alone. It scared me, and that's really hard to do, so I'm a fan.

Hey, I said it was good! It's just...that last thing, with the baby. I mean, come on, Marilyn!

A dingo ate that baby.

I finally got around to seeing This is England recently and the movie knocked me out! It probably would have been at the top of my "Best films of 2007" list if I had compiled one. Stephen Graham is absolutely amazing in it!

The '80s is one decade that is often gotten wrong by filmmakers but Shane Meadows nailed it. I really want to see more of Meadows's films. Any recs?

Dead Man's Shoes. It's not perfect, but it's still pretty damn good, and Paddy Considine is fantastic. Somebody compared his performance to early De Niro, and I think that's pretty accurate.