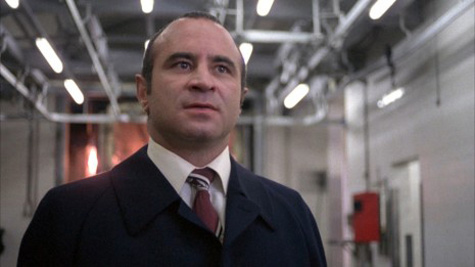 In 1988, Bob Hoskins starred in the Who Framed Roger Rabbit, a massive, effects-heavy Hollywood blockbuster directed by Robert Zemeckis and produced by Steven Spielberg. As down-on-his-luck private eye Eddie Valiant, Hoskins acted opposite cartoon characters like the titular rabbit, the rabbit's wife Jessica, and several nefarious weasels, as well as more famous creations like Betty Boop, Yosemite Sam, and so on. Hoskins made what must have been rather difficult look effortless. The film was an enormous success, boosting Hoskins’ profile in Hollywood, and remains a pretty delightful piece of work. He worked steadily in America thereafter. To this day, it seems like a small miracle that Hoskins (by no means Spielberg or Zemeckis’ first choice) got the part, not least because in one of the films he appeared in the previous year, Mike Hodges’ A Prayer for the Dying, Bob Hoskins plays a priest in Northern Ireland battling with a troubled past (while trying to help remorseful, yet nihilistic, IRA terrorist Mickey Rourke find redemption) who at one point beats in the face of a gangster with the lid of a garbage can.

Hoskins could successfully embody both characters thanks to his very specific look: Short in stature, compact in build, constantly in the process of balding, he was like an ambulatory, unpredictable fire hydrant. His gruff, cracked voice and thick Cockney accent could be made to sound incredulous, or innocent, or malevolent. His eyes could make him look naive, or like he had murder in his heart. The most remarkable thing about this range is that Hoskins, either by chance or because he sought out these parts, could often do all of this in the same movie. A Prayer for the Dying is a decent case in point: His Father De Costa wants only to see the end of violence in Ireland but has a clenched fist inside him aching to be swung. But Hoskins made a clutch of British crime films in the 1980s from which this idea emerges almost as a connective theme.

An even better example is 1980s The Long Good Friday, one of the defining, and best, films of Hoskins’ career. Directed by David McKenzie and written by Barrie Keeffe, it’s arguably the true epitome of the British crime film. (Its stiffest competition is likely Get Carter directed by, hey look at that, Mike Hodges.) One thing that distinguishes The Long Good Friday is its fairly ingenious premise: British gangster Harold Shand (Hoskins) is working on an important deal that will at least partially legitimize him (at least in his own mind) as a businessman, but on the day — which happens to be Good Friday — that the deal is to be solidified, the murders of his confederates destabilize everything. Who is behind these killings? How can they be stopped? The film, which takes place over the course of that one long Good Friday, mercilessly puts the screws to Shand until everything explodes.

Hoskins’ approach to the role is surprising. Looking out from Hoskins’ eyes, Shand can, for long stretches of the film, seem like a fairly normal, even friendly person. But he wields as a weapon a brutality equal to whatever group is apparently stalking him. In one scene, he has members of rival gangs brought to a meat locker, hung upside down by their ankles, and threatens to freeze them to death if they don’t tell him who’s behind the murders. Later, when he discovers that his right-hand man (Derek Thomson) stupidly set into the motion the chain of events that led to this mess, Shand goes from anger to a sudden, untethered rage, which he uses a broken bottle to express. It’s sudden, and terrifying. This confused little bulldog has just turned psychotic.

But it’s that confusion that is the key to Hoskins’ genius. In a scene late in the film, Hoskins and his girlfriend Victoria (Helen Mirren) are at home, each at a loss about what to do next. Running his hand over his head, sitting down numbly, Shand says “What’s happening to it? … For 10 years, it’s been calm. Now this.” Victoria breaks down and the two embrace on the couch, weeping. “I don’t want to die,” Victoria sobs. “Don’t let them kill us.” Shand says he won’t let that happen, but in Hoskins’ face you see he is just as terrified. And of course, in The Long Good Friday’s famous last shot, all the viewer gets is his face again, for minutes on end, Hoskins as a powerful mob boss, now completely helpless and terrified. It’s among the most pure, expressive, and chilling pieces of acting I’ve ever seen. 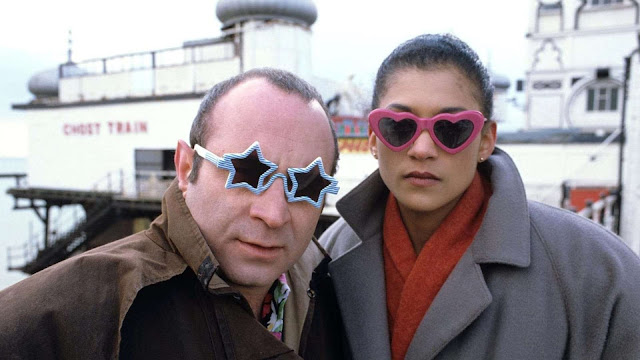 Five years later, Hoskins would star in a film that would earn him Best Actor at Cannes, an Academy Award nomination, and would change his career: Mona Lisa. Written and directed by Neil Jordan (who would later go on to make The Crying Game, a film that is essentially a reworking of Mona Lisa), it’s a British crime film done as a romance. Hoskins stars as George, a low-level member of a criminal organization run by Michael Caine. George was recently released from prison, and has re-entered the gang as a kind of chauffeur. The audience knows that George did his time without giving up anyone else; given this, he thinks he should be treated with more respect. But he’s too meek, too naive, and has too much misplaced respect for Caine’s Denny to be very aggressive about it. So he earns his living driving around a prostitute named Simone (Cathy Tyson) to visit her rich clients. George and Simone initially butt heads, eventually become friends, and finally George falls in love with her. Crucially — and the audience can see this before George can — Simone does not fall in love with George. The reason why a romantic relationship is impossible will become clear in time, and leave George furious, alone, feeling disrespected and impotent. His anger at Simone is both just and unjust, and he knows that, and so his frustration builds.

George, though the lead of the film, never becomes the hero. Nor does he ever descend into villainy. His wish is merely to free Simone from Denny’s clutches (he wants this before and after she rejects him). However, while he has the necessary bravery, he never has the cunning. If Simone’s going to be free, someone else will have to take charge. Mona Lisa, like The Long Good Friday, has its own eruption of impulsive violence, but this time Hoskins’ character has nothing to do with it. In fact, he cries out for it to stop. The whole film, George is in over his head, and Hoskins plays him at first with a certain warmth  and eagerness. Hoskins had a big smile, and his George seems like the friendliest gangster you could ever meet. It’s that friendliness that gets him in trouble. Hoskins plays George as someone who was not cut out for the world of crime. He’s used by Denny, and he’s used by Simone, and so really what he should do is just leave and spend time with his daughter and his best friend (Robbie Coltrane). There is ultimately a sweetness to Mona Lisa that suits Hoskins. The fact that the nihilism of The Long Good Friday also suited him is why we remember him.

Bob Hoskins passed away in 2014, less than two years after announcing his retirement from acting after being diagnosed with Parkinson’s disease. The hole in world cinema caused by his absence is considerable; not only is his marvelously unique talent and presence gone, but gone, too, is the era when someone like him could be cast as the lead in Who Framed Roger Rabbit? I even doubt, were Hoskins still alive and Jordan making Mona Lisa today, that Jordan would be able to get the film financed with Hoskins attached. Jordan would still want to, of course, but the market wouldn’t permit it. Or so the argument would go. Fortunately for us, his filmography is extensive and varied: One random six-year span of his career includes roles in Atom Egoyan’s weird and sinister Felicia’s Journey, Jean-Jacques Annaud’s Enemy at the Gates, in which he plays Nikita Krushchev, Stephen Frear’s light ribald comedy Mrs. Henderson Presents, and an episode of Frasier. He was, in the end, an actor everyone loved. Charming, funny, endearing, whose mere presence in a film immediately improved it.

But speaking for myself, I will never forget that mad dog impulsiveness, or that broken bottle.

Just a great write up.