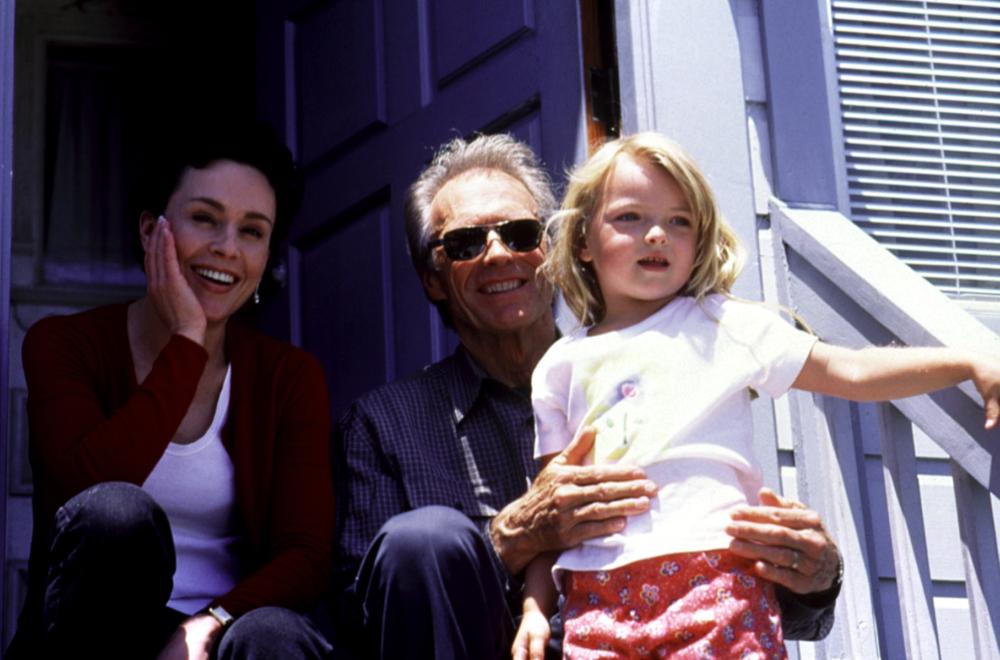 When Clint Eastwood’s Unforgiven came out in 1992, many critics noted, as they could hardly do otherwise, that in this film — which regards the idea of violent retribution with a somewhat jaundiced eye — the legendary actor/director appeared to be looking back on a long career spent making movies that often featured Eastwood using violence for somewhat less morally ambiguous purposes. That last bit, about what kind of films Eastwood made before 1992, is arguable, but in any case that Unforgiven was a work of self-reflection seems undeniable. Eastwood would go on to make other films like this: If anything, 2008’s Gran Torino is even more explicit in its intentions than Unforgiven, as Eastwood’s character deliberately refuses to close the film with the kind of violence everyone in the audience was expecting to see (I know I was).

And in 1999, Eastwood released True Crime, a sort of investigative journalism thriller that has gone almost completely unremarked upon since its release. While I wouldn’t argue it’s better than the other films I’ve mentioned, it is in its way an even more personal work for the director and a more striking example of art as an act of self-examination.

There are a couple of things that Eastwood’s detractors often bring up when trying to make the argument that he is a Bad Person (and this may or may not be hitched to an argument about his actual cinematic work). One is his politics, as he has the temerity to be right-of-center when they would rather he not be, but that doesn’t concern us here. The second is his history with women, which is not exactly admirable. It’s unnecessary to provide a detailed breakdown (these can easily be found online if you’re interested), but suffice it to say that Eastwood’s many infidelities are notorious as are his often neglectful attitude towards some of the children that occasionally resulted from these affairs. I remember reading an interview with Eastwood in which he said that he never had a problem with drugs or alcohol; rather, he said, his problem was women. It could perhaps be more accurately said that Eastwood was a problem for many women.

This is exactly what Eastwood wrestles with in True Crime. As a thriller, the film is fairly engaging, while being fairly loose and casual, as is typical of the director. Eastwood, in his late 60s at the time, plays Steve Everett, a veteran crime reporter at a newspaper in, as his young colleague played by Mary McCormack describes it, “bumfuck California.” When that colleague, with whom he’d been successfully flirting earlier, dies in a car accident, Everett is given the story she’d been assigned: Go to the local prison and interview Frank Beechum (Isaiah Washington), a prisoner set to be executed that night for the murder of a pregnant convenience store employee years before. The assignment is given to Everett by his editor, Bob Findley (Denis Leary). Everett has been having an affair with Findley’s wife (Laila Robins). This fact is known not just by Findley, but apparently by everyone else, including Alan Mann (James Woods), the paper’s managing editor. In addition to all this, Everett is married to Barbara (Diane Venora), with whom he has a young daughter (played by Eastwood’s own young daughter, Francesca). Barbara is the one person ignorant of Everett’s affair. Apart from the first and last scenes, True Crime takes place over the course of a single day. Much of that day is given over to Everett’s quest to prove Beechum’s innocence before he’s executed, but his mess of a personal life, his legitimate shittiness as a husband, and his almost smirking disregard for Bob Findley’s pain and anger, doesn’t complicate his noble pursuit to free an innocent man — that obviously remains noble — but it does complicate the audience’s feelings about the man doing the pursuing. At one point, Findley confronts Everett about the affair, and Everett says “I’m sorry, Bob. I really am sorry.” Findley doesn’t accept the apology. “I don’t think you are,” he says. “I don’t think you’re capable of feeling anything for other people.” By the end of this scene, Findley’s sorrow and helplessness (beautifully played, it must be said, by Leary) are plain; the damage Everett has done to him is clear. The possibility of regret is in Eastwood’s eyes.

And yet, later, when the two men clash in Mann’s office over Everett’s approach to the Beechum story — Findley neither likes nor trusts Everett, and wants him to do only the job Findley assigned him to do; Everett knows he’s on to something bigger and to abandon it now would be immoral — Everett has no problem kicking Findley when he’s down. Interpreting Findley’s obstinacy as revenge for the affair, Everett snaps “Hit me, I deserve it. Then go home and hit your wife, she likes it.” (One of the high points of James Woods’ career is the stunned-into-laughter reaction he has to that line.) But Everett is the only person who believes Beechum is innocent — why should Findley’s rejection of the theory make him deserving of that kind of cruelty? Of course it doesn’t, but there is something deeply thoughtless and mean about Everett, something that, as he fades into old age, he’s just becoming aware of. Notice, also, the scene where Everett takes his daughter to the zoo and is so reckless (in fairness, in his attempt to show her a good time) that she’s injured. Everett is not merely a terrible husband, he’s also a thoughtless father. One might consider the casting of his own daughter in this role as significant.

Was Eastwood having a similar moment of clarity in the late 90s? It has to mean something that the key scene of the film, the most memorable and filmically precise, has nothing to do with the Beechum plot at all. Towards the end of the film, Everett comes home and finds his wife Barbara sitting quietly in their dimly lit living room. He sits next to her, and she puts her wedding ring on the coffee table in front of them. “If this were a bullet,” she says, “you’d be dead.” She’s found out about the affair, and it has destroyed her. He begs for forgiveness, and promises to change, and she sobs and isn’t having any of it. “I packed all your stuff,” she says. “You can take it now, you can come back later, just please go now.” It’s a remarkable performance from Venora, who also played a put-upon wife in Heat, a far superior film, but in which, it must be admitted, she plays a bit of a construction, a character who exists to show how fucked up Pacino’s Vincent Hannah is. In True Crime, she’s playing a person who is being fucked up by her husband. One gets the sense that there’s a whole movie about Barbara out there somewhere. Everett, who Eastwood plays as a kind of oblivious goof in most situations unless it pertains to his job, is shocked by the devastation he’s left in his wake and also by the realization that he can’t fix it.

Also remarkable is how the film depicts the three men in the earlier scene, the showdown between Everett and Findley in Mann’s office, in such contrast to Venora’s genuine anguish. It’s an honest depiction of a certain type of men, which is to say, in this case, assholes. At one point, Findley says “I can’t work like this; this environment has become intolerable.” Mann replies “’Intolerable environment,’ what are you like some fuckin’ Feminist? Are you a cooze??” Everett’s scene with Barbara is less than 15 minutes later. 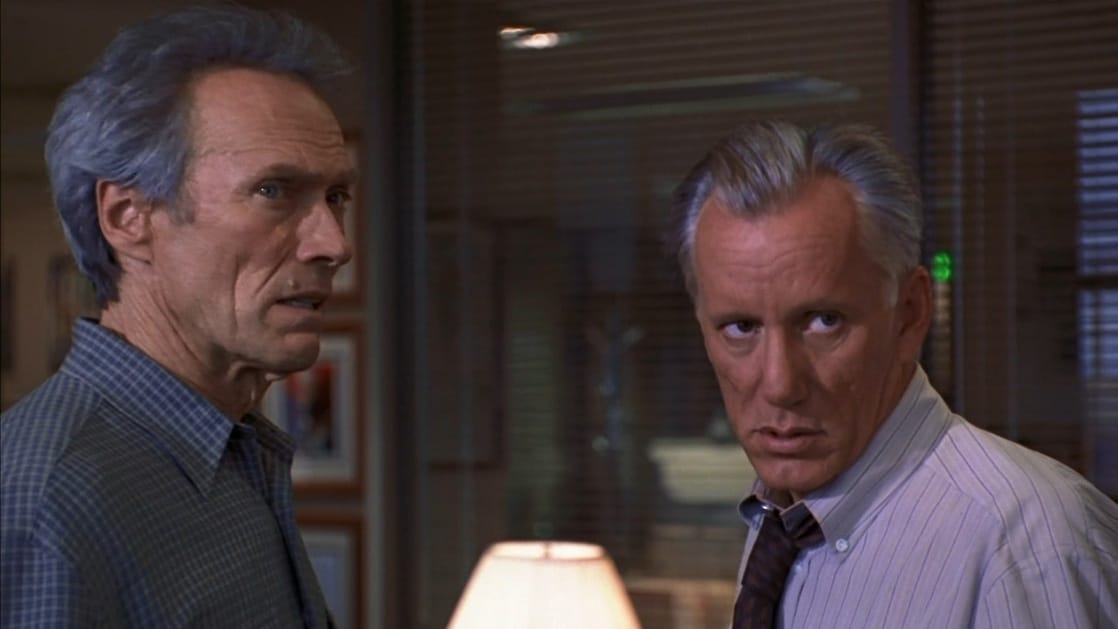 If anyone imagines that Eastwood is oblivious to this contrast, or to the unpleasant irony, I feel confident that they are mistaken. It’s kind of amazing how subtly True Crime sketches out Everett’s failures as a man, while foregrounding his heroism. On one hand, you can’t miss it, but on the other, the extent of the damage isn’t truly felt until Eastwood shows you what his character has done to Barbara. Forget about the exoneration of Beechum: That feels like the real climax of the movie.

Clint Eastwood has never written a film in his life. He has produced, acted, directed, even scored dozens of films, but he’s never written the screenplay for a single one. And he is, by my reckoning, the current living definition of the auteur theory, in that solely, or primarily, as a director, he has pursued themes through various projects, even those that might seem unrelated on the surface. In this way, the auteur, classically, makes a project they did not originate personal to them. True Crime is based on a novel by Andrew Klavan (also right-of-center politically, if that matters) and has three credited screenwriters. Eastwood came in late. But he chose the project, and put himself into it. Laying his flaws bare does not excuse them, of course — no woman hurt by Eastwood in his actual personal life watched True Crime and thought “All right, well, I guess it’s okay, then.” But it is, at least, a film that acknowledges “This is me.” I’m not sure what more an artist can do.

Thanks for returning to the field - I am really enjoying reading this one on True Crime, the Manhunter piece and the Bob Hoskins piece - paul dionne