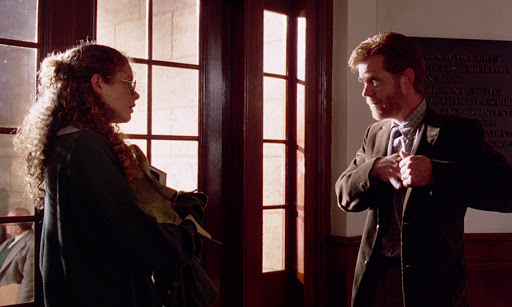 When David Mamet’s play Oleanna premiered on Broadway in 1992, the Anita Hill-Clarence Thomas hearings were less than a year in the past. Perhaps – or even more than likely – as a result, Oleanna, which is about, let us say, escalating tensions between a male professor at an upscale but unnamed college and a shy, struggling female student, became in the eyes of critics and audiences an acerbic examination of sexual harassment and political correctness. Much controversy ensued, leading in some cases to actual protests, and threats made against William H. Macy and Rebecca Pidgeon, the stars of the play. Though it would be disingenuous to claim the Hill-Thomas case played no part in inspiring Mamet to write Oleanna, his insistence at the time that power, not sexual harassment, was his subject, is impossible to refute when you look at the play or the subsequent film that Mamet himself directed just two years later. A film made, maybe, in the hopes that people would get it this time.

That film was provided, by some marketing department somewhere, with the tagline “Whatever side you take, you’re wrong.” This has the whiff of empty provocation about it, and doubtless that was the spirit in which it was written, but it’s also fundamentally accurate. However, before going any further, the basics of Oleanna should be laid out. John is a professor at what one might take to be an Ivy League university, who, as the story begins, is in his office, talking on the phone with his wife, discussing the house they’re trying to buy. The audience can assume this is after his normal office hours, but also present is one of his students, Carol (this time played by Deborah Eisenstadt), who has come to talk to John about the failing grade she received on a paper she wrote for his class. When the two are finally able to talk, Carol, who is in a panic about failing the class, practically begs John to help her because she sits in class and doesn’t understand a word anyone is saying. John, not unwilling to help but also in a hurry and kind of, let’s face it, a prick, at first dismisses her as someone who knew the rules of grading when she came to college. Gradually, however, her fear and vulnerability break through and he does attempt, sincerely, to help her. Over the course of the remaining, say, 70 minutes of the film, this goes increasingly poorly.

In the final scene, we see that Carol has completed her journey from mousey and skittish to angry and confident in her own righteousness, while John has spiraled into near-hopelessness. In addition to being fired (they’re meeting again in his office, maybe during his last week there), we’re about to learn, at the same time John does, that Carol has formally accused him of attempted rape, a crime of which we know he is entirely innocent. Added to this is Carol saying to John, while he, furiously dismissing her from his office and back on the phone with his wife, to whom he says “I can’t talk right now, baby, “Don’t call your wife baby.” Which I hope we can all agree is none of her business. Though perhaps we can’t. Oleanna’s not controversial for nothin’. In any event, this tears it, as far as John is concerned, and he begins to viciously beat Carol.

I can imagine there are some people in the audience, both of the play and the film, who, when this happens, were at minimum inwardly gleeful over this release of violence. I can imagine with similar ease that there are people who flinch from it but believe the intent is to excite those vile pigs elsewhere in the theater. Well, whatever side you take you’re wrong. At the end, John, about to batter (kill?) Carol with a heavy wooden chair, freezes, a look of dawning horror coming over his face. “Oh my God,” he says, and then repeats it. A tearful, cowering Carol replies “Yes, that’s right.” Down goes the curtain and/or up comes the lights.

In an interview with John Lahr for The Paris Review, some years after the film came out, David Mamet said John, in that moment, “realizes that he is perhaps the cause of the plague on Thebes.” If you know your Sophocles, you’ll recall that in Oedipus Rex it is revealed that Thebes has been ravaged by a terrible pestilence due to a curse that Oedipus, the Theban king, inadvertently brought upon the city himself by, as a result of a complicated mix-up, killing his father and sleeping with his mother. He didn’t mean to do it, but he still did it.

But if John didn’t attempt to rape Carol – and he didn’t – and he if Carol should keep her nose out of the terms of endearment used between John and his wife – and she should – then what did John do? Well, let me tell you what he did. And it’s interesting, when you consider that as divisive a figure as Mamet already was, how he only became more infuriating (to some) when in 2008 he declared that he was “no longer a brain-dead liberal” (his work subsequent to that announcement was declared, and not unreasonably, by many of those who were newly infuriated to be not much different in theme or tone to what had preceded it), to look at Oleanna in 2020 and ask (rhetorically and in one’s own head) the people outraged by the play and the film, and by Mamet in general, “But wait, don’t you agree with almost everything he’s saying here?”

The key moment comes after John has warmed to Carol and decided he genuinely wants to help her (but also after she has snapped at him for interrupting her, which both of them do to each other constantly anyway) and she asks him about his apparent disdain for higher education. Carol quotes him: “You said that education was ‘prolonged and systematic hazing.’” John says “Yes, it can be so.” Carol, naturally enough, wants to know if this is the case, why does he teach? To which John replies “I do it because I love it.”

At this point in the film, Mamet cuts to Carol for a beat. What John meant by “I do it because I love it” can be reasonably interpreted as “I love to teach, I love to impart my knowledge onto the youth of America” or something like that. But in the context of their exchange, and in the context of their relationship, Carol is wondering, and not unreasonably, if he might actually mean “I do it because I love prolonged and systematic hazing.” Add this on to John agreeing to wipe out her failing grade and give her an A for the whole class if she will agree to meet with him for private instruction (something he seems sincere about, with no ulterior motive, but, I mean…) because, as he tells her, “I like you,” and who can really blame Carol for suddenly feeling immense, if confusing, pressure?

And while she wants help, and wants to pass, John’s solution to simply give her an A, however generous his motives, she takes as an insult. As she says in the second scene:

“And you think it’s charming to ‘question’ in yourself this taste to mock and destroy. But you should question it. Professor. And you pick those things which you feel advance you: publication, tenure, and the steps to get them you call “harmless rituals.” And you perform those steps. Although you say it is hypocrisy. But to the aspirations of your students. Of hardworking students, who come here, who slave to come here – you have no idea what it cost me to come to this school – you mock us. You call education “hazing,” and from your so-protected, so-elitist seat you hold our confusion as a joke, and our hopes and efforts with it.”

It would be unreasonable, I suppose, to write anything about Oleanna in 2020 and not make some kind of joke about William H. Macy, and the college admissions scandal he and his wife Felicity Huffman found themselves embroiled in last year, but please, I beg you, let my bringing it up at all count as that joke. On the other hand, when that story broke, of course somebody went to David Mamet for a statement on the matter. His response was published by The Hollywood Reporter. I’m not going to quote it at length, but the opening sentence should have come as no surprise to anyone familiar with Oleanna: “I worked for very many years in and around our Elite Universities. I am able to report that their admissions policies are an unfortunate and corrupt joke.” Oleanna is not about college admissions, at least not explicitly, but it’s also not not about that (“you have no idea what it cost me to come to this school”). The whole idea of Oleanna is the ruthless power that Mamet believes colleges wield, however unconsciously on the individual level of professors like John, over their students. As Carol gains strength from her sense of righteousness (fueled by a vague “group” she says she’s joined, and which is often interpreted as radical feminists but which, in the film, is much more clearly a student’s rights advocacy group), she lectures John about his privilege that lets him feel so casual and entitled about his place in the university in relation to hers. And Mamet means this. He’s not taking down “political correctness” when he has Carol say “Do you know what you’ve worked for? Power. For power…And you sit there, and you tell me stories. About your house, about all the private schools, and about privilege, and how your are entitled. To buy, to spend, to mock, to summon.” The height of John’s lack of self-awareness comes when, after smugly denouncing higher education, he mentions the frustrations inherent in trying to get his son into private school.

But John did not try to rape Carol. He didn’t. He does, at the end of the second scene, put his hands on her in an attempt to get her to stay and listen to him because he’s desperate that they should work out their differences. But he doesn’t try to rape her. The fact that by the end of Oleanna her assertion that he did has gained traction at least within the university, thereby destroying his career, only strengthens Mamet’s claim that this is about power, not harassment or political correctness. When John had power, which he gained by Carol choosing to take his class, his attempts to educate her come with smug condescension, self-regarding generosity, and a complete ignorance of the sacrifices Carol and her family had to make to put her in his office in the first place. When Carol takes power for herself, which she obtains merely by accusing John of an awful crime he didn’t commit, she takes the opportunity to lecture him about everything wrong he’s done in his life and career, from regarding education with a cynical eye to calling his wife “Baby.” They're both only trying to help. But you can't help if you don't have power.

Edited by Sonny Bunch
Posted by bill r. at 5:42 PM

Excellent piece and I'm going to miss having a steady supply of your stuff again.

Have you thought of doing a patron? I can't imagine I would be the only one to cheerfully chip in for your work.

A really good piece about a really knotty and interesting film. And god damn, "To buy, to spend, to mock, to summon." is a great line.