Welcome to the Internet 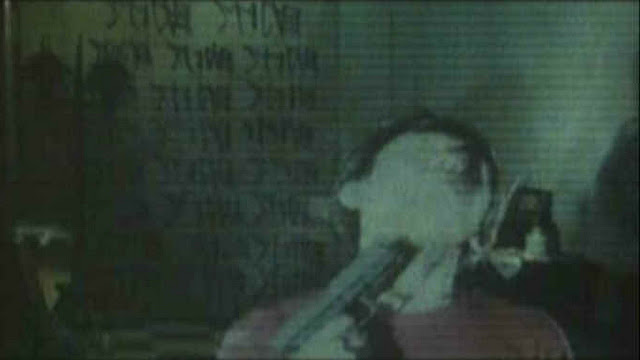 Every so often, a cinematic or literary genre or subgenre that usually consists in the realms of cult appreciation will find itself, usually after a particular entry into their ranks hits it big, enjoying what we call a “boom.” Audiences and publishers and studios are suddenly hungry beyond reason for more of this stuff that six minutes ago they barely even knew existed. As you might expect, this consequence has its ups and downs. The worst of the downs is that the world is suddenly awash in, say, ironic heist and hitman movies following the release of Reservoir Dogs and Pulp Fiction, or teenage angst horror after Stephen King’s Carrie was published in 1974. Which would obviously be fine if all of this stuff was good, but of course it never is. So eventually it all crashes down and people get sick of heist films. On the plus side, while the boom is in full swing, really good, interesting stuff that couldn’t get a look in yesterday suddenly finds a gap in the fence and slips through. Would we have One False Move without Pulp Fiction? It’s possible we wouldn’t. And I feel certain that without Stephen King and Rosemary’s Baby and The Exorcist and The Other, there’s no way writers like T.E.D. Klein and Karl Edward Wagner would have received the kind of mass market publication they did. It’s a fair trade, in my view.
Back in the early 2000s, one of these booms occurred in the film world when – and as near as I can tell this was the locus, but it’s possible I wasn’t paying attention to other factors – The Ring, Gore Verbinski’s remake of Hideo Nakata’s Ringu from 1998 became a huge success. And so now, everybody wanted to see more Asian horror, specifically Japanese horror, so much so that amongst nerds it was even given the stupid nickname “J-horror.” In America, this wave of Asian horror more often than not, it seems to me, took the form of Hollywood remakes, because, hell, that’s what got us here in the first place. Hence your Dark Waters starring your Jennifers Connelly and your The Grudges starring your Sarahs Michelle Gellar and whatnot. It did also create a market in the US for the real thing, however, and whatever expected downside that went along with it, there were also some really terrific movies that were suddenly readily available. Including that which has brought us here today, Kiyoshi Kurosawa’s Pulse, from 2001, one of the great horror films of the new century. I’m sure Pulse would exist with or without The Ring. I’m just not sure when we would have been able to see it.
Pulse, which has just been released in a deluxe Blu-ray edition from Arrow Films, has a structure that is not unheard of in traditional narrative filmmaking, but is definitely unusual in the horror genre: two sets of characters, unknown to each other, have similar strange, terrifying experiences and one or more members of each group try to find out what’s going on, until their investigations bring them into contact with each other. Whether or not, ultimately, this contact does anybody any good.
In one group, three employees at a greenhouse/nursery notice that another co-worker, Taguchi (Kenji Mizuhashi) hasn’t been seen in a while, nor has he contacted them about an important project he’s working on. One co-worker, Michi (Kumiko Aso), goes to Taguchi’s apartment. He’s there, but during Michi’s visit he commits suicide. The computer disk containing the project he’d been working on is pored over by Michi and her friends Junko (Kurume Arisaka) and Yabe (Masatoshi Matsuo). On the disc, they find ghostly images in photographs of Taguchi’s apartment, and when Michi returns their she finds a weird black stain on the wall against which Taguchi hanged himself.
Meanwhile, a young man named Ryosuke (Haruhiko Kato) takes his first tentative steps towards exploring the then-new Internet. After signing up with a provider, a website opens automatically, on its own. The site shows various people, their faces obscured, in dark rooms. The people are unmoving, or they move with eerie repetitiousness. Unnerved, Ryosuke seeks help at a computer lab at the university he attends. A computer science graduate student named Haure (Koyuki) takes interest in his problem and agrees to help. As the film progresses, characters will find a slip of paper on which is written “The Forbidden Room,” they will encounter ghosts in rooms whose doors are bordered by red tape, and they will hear, and entertain, theories about ghosts pushing their way into the physical world. And these characters will become depressed, and they will begin to feel hopeless. Michi will witness another suicide. 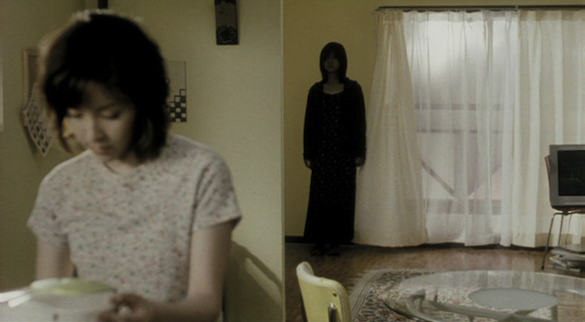 Kurosawa’s ghosts are hazy, slow, terrifying entities. Some are seen more clearly than others, and some perhaps can’t be seen more clearly – one is a walking shadow whose limbs move in loping arcs, another is a black outline seen from a distance in a library, who flees, or disappears, when Ryosuke approaches. This is quite a scene, not just for the imagery, but because it leads Ryosuke to meet a university student who explains his theory that spirits are using technology (specifically the internet, it should be clear by now) to enter the world of the living. The scene isn’t fascinating because of the theory, necessarily, but because the student is moved to tell it when he notices that Ryosuke has seen the ghost. He, the student, has been seeing them around campus, which led him to the theory. But it’s the matter-of-fact way the topic is broached, both visually and through dialogue, that makes it obvious, if it wasn’t already, that Pulse is a ghost story like no other. The ghost Ryosuke is simply among the stacks in the library. It’s notable as a presence not because of what it’s doing, but because a pitch-black thing in the shape of a human shouldn’t be there.
The table has been set for this kind of off-hand way (and all the more chilling because of that) Kurosawa introduces his supernatural elements by showing Michi, Yabe, and Junko react to Taguchi’s suicide as something that not only should be put behind them instantly, but can be. Michi has to work harder to shake off what she saw, and what, when you get right down to it, must be a loss to her personally (the implication is that she was friends with Taguchi, that they all were) than Junko does, and maybe, finally she doesn’t. Maybe she only acts like she does. If that’s the case, the path she walks, as opposed to those down which Junko and Yabe go, is different for a reason. She’s more aware. She’s more awake as a human being.
This is perhaps what plagues everyone in Pulse: that they are human beings. I’ve seen the argument made, and made recently, that Kurosawa really blows the lid off the internet with this film, that he had its dangers pinned down while the rest of us were still marveling at its limitless newness, but not only am I not convinced that he makes his case, I’m not convinced his primary concern was to make one in the first place. The danger of Pulse, the weapon that is used against us, is loneliness, that most human and effortlessly acquired of diseases. This is not the worst thing that the internet has afflicted on the world by any means, at least as I see it in 2017. What the internet achieves as a device in Pulse is a representation of and a portal into the unknown (and a portal out of the unknown). As one character after another faces the unknown directly – not death exactly, or not merely death, but whatever death is prologue to – the realization of their aloneness begins to metastasize. Not so glib about death now, are you, Junko? So the internet isn’t the internet: the internet is death. Which, okay Kiyoshi Kurosawa, that’s a fair point.
Gradually, Pulse turns apocalyptic. It seems to be, at once literally and metaphorically, an apocalypse of suicides. As the film moves along towards its end, it begins to depopulate. By which I don’t mean that the characters we know begin to die off, though that happens as well. Rather, even in a film that has never been teeming with background extras, the spaces through which Kurosawa’s people and camera move become undeniably emptier. And then any doubt about this is removed, but it’s remarkable how Kurosawa gets this across before being blatant about it. Pulse is a movie whose narrative momentum is built around a process of slow removal. Unavoidably, the film gets lonelier and lonelier.
Posted by bill r. at 7:20 PM