What’s that you ask? Have I seen two movies? Have I written a few paragraphs about each??? Well actually yes I have!! 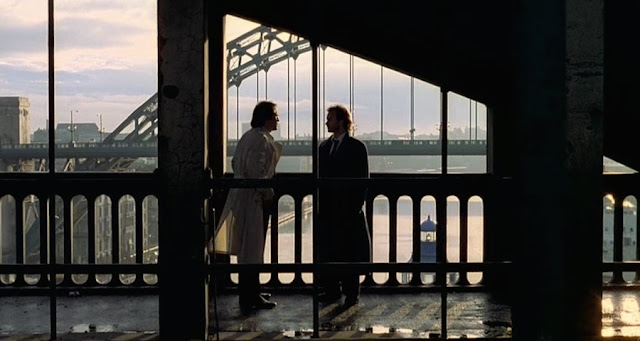 Stormy Monday (d. Mike Figgis) – Like Don Siegel’s The Killers and George Romero’s Creepshow, this film, just out from Arrow Video, features one of those casts the true looniness of which can only really be appreciated in retrospect. In this case, Mike Figgis’s debut feature (which is about gangsters and nightclubs and jazz and whatnot) we get a main cast comprised of Sean Bean, Melanie Griffith, Tommy Lee Jones, and Sting. For a moody 80s crime film, that bodes well, right? Or at least it bodes interesting. Right?
The guts of the plot are typical: Sting plays Finney, the strong-willed owner of a jazz club who, as the wearily satirical “America Week” gears up to begin in the English city of Newcastle, is soon being threatened and otherwise pressured to sell his business because of some criminal real estate something-or-other. Finney is tipped off that this is going to happen by Brendan (Bean), who overhears two guys talking about it while he’s out on a date with Kate (Griffith). She’s a waitress at another club, but also reluctantly uses her feminine wiles for mercenary purposes, at the behest of Cosmo(!), an American businessman who is really a gangster when you think about it, played by Jones. Finney fights back against physical threats, Brendan falls in love with Kate and finds himself caught in the middle of all this, Kate wants her freedom from Cosmo, and Cosmo wants to destroy all that is good in the name of America or whatever. Together, they rush towards a breathful anticlimax.
The film looks good. Roger Deakins shot it. All the performances are, you know, fine. Jones is full of the blank-faced tics that made so much of his early work hard for me to get behind, and Melanie Griffith still hadn’t quite learned how human beings speak. But Sting and Bean are good. The main problem for me, in addition to the fact that as a  crime thriller, which Stormy Monday seems to think it is, I was never once compelled by anything that happened on screen or by the people doing them, which admittedly is hardly a frivolous complaint, is Figgis’s lame, limp-dick satire of America and capitalism. I’ve said before that I have many, many problems with satire as a comedic form, at least as its been practiced in my lifetime, because in satire all you have to do is plant a giant Pepsi bottle somewhere it doesn’t belong and suddenly you’ve make a “joke” which is not only “funny” but which also “says something.” Satire is revered, satirists are holy figures, yet somehow it takes no effort at all to make it or be one. No one expects more out of satire than a giant Pepsi bottle. 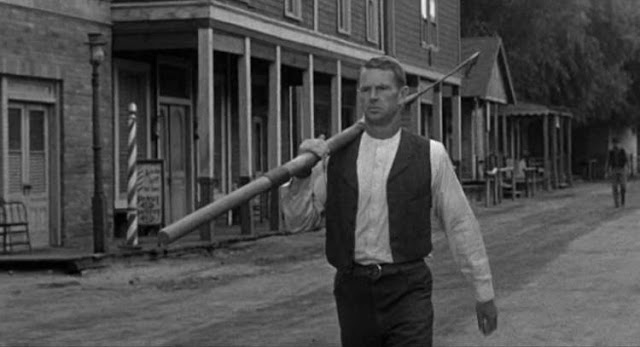 Terror in a Texas Town (d. Joseph H. Lewis) – This 1958 Western, also just released by Arrow Video, has a few things in common with Stormy Monday. Here, a crooked businessman and extortionist named McNeil (Sebastian Cabot) pressures a Swedish immigrant (Ted Stanhope) to sell his farm, because McNeil knows there’s oil bubbling underneath the land. When the farmer refuses, McNeil’s hired gun Johnny Crale (Nedrick Young) murders him. Before McNeil can swoop in and buy up the rights, though, the farmer’s son George (Sterling Hayden) arrives in town, learns his father has been murdered, and begins a quest to find out why he was killed and who is responsible. His mission is somewhat hampered by the fact that the other farmers in town are frightened of McNeil, and so at times it seems as though, with the exception of Mirada (Victor Millan), his dad’s loyal friend, George is going it alone.
This obviously also calls to mind High Noon, which came out six years earlier and bore the same political subtext. Terror in a Texas Town was written by Dalton Trumbo, blacklisted and using the credited Ben Perry as his front, and so capitalism is condemned, and immigrants working the land are the victims as well as the heroes (here it parts ways with Stormy Monday, since in that film the foreigners (the Americans), are the whole problem). In other words, the politics are as up front here as they are in Stormy Monday. The difference is that the writing here is good, the draw of the story is primal, and his while Figgis wanted his individual shots to look good and hired the right guy to give him that, Joseph H. Lewis and his cinematographer Russell Harlan are concerned with their film looking good as shots and scenes move and flow into each other.
Even better, Lewis and Trumbo weren’t interested in stock heroes and villains. Or least, not exclusively. George and Mirada don’t have a lot of guilt to work through, apparently, and McNeil isn’t about to see the error of his ways. Johnny Crale, though, is another matter. Nedrick Young’s performance is top-notch, the best in a very well-acted film, and he has the most to work with. Early in the film, Young subtly lets on that his Crale, a prolific killer, has something going on inside him, related to how he’s chosen to earn his living. And it’s always there, manifesting in different ways. The moral and existential crisis that is roiling around inside Crale’s head and guts might bring out in him a sense of pity one day, and fuel his brutality the next. If he’s the Angel of Death, and his black clothes suggest that he might be, then he’s one who, if he’s not stopped, will soon suffer a complete psychotic breakdown, and bring everything and everyone down on his head.
Posted by bill r. at 9:23 PM