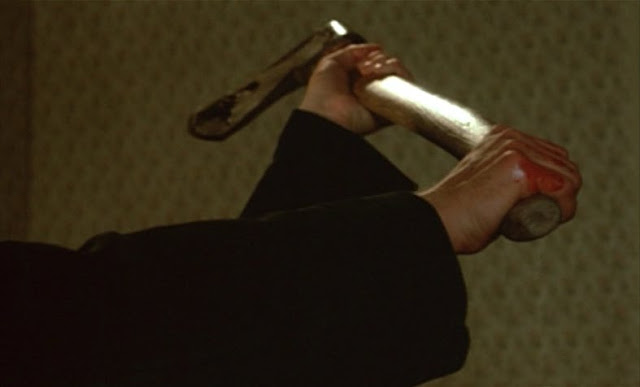 In a 1983 interview for Positif, which can be found in the booklet accompanying the new Criterion release of L’Argent, Michel Ciment mentions to Robert Bresson that “According to you, an image should not be matched with a powerful sound. Bresson’s answer is as complicated as you might expect, and eventually deviates somewhat from the main point, eventually stating that as a cinematic artist what he’s seeking is “impression.” He goes on:
Let me give you an example from L’Argent. When I’m on the major boulevards of Paris, I immediately ask myself: What impression do they make on me? Well, the impression is of a mishmash of legs making a sharp sound on the sidewalk. I tried to convey this impression through sound and image. So then I’m criticized for framing the bottoms of people’s pants. How intelligent! I received similar criticisms regarding the horses’ legs in Lancelot du lac. I showed the horses’ legs without showing their riders, in order to draw attention to the muscular power of their hindquarters when they brace themselves to launch into the tournament. I’m not going to show the rider, because then everything would be scrambled, something entirely different would come into play, people would look at him, they would wonder what he was going to do.
Beyond making me wonder about the kind of film critic who would, or indeed could, be so put off by the way pant legs are photographed – a matter I wish this interview could have found the time to explore further – beyond that, as I say, what Bresson’s answer brings to mind is not the shot of pant legs described, but rather another one later in L’Argent, near the end. The main character, Yvon (Christian Patey) has just been released from prison, and has after some time made his way into the countryside where he’s taken in by an old woman (Sylvie Van den Elsen), who lives on a farm with her father (Michel Brigue). She has done this secretly, but is discovered by her father. One morning, the old woman pours coffee into a bowl, to take it to Yvon who is staying in the barn. As she leaves the house and is walking through the grass to the barn, her father confronts her. He reaches out to slap her, and just as his hand strikes her face, Bresson cuts to her hands, holding the bowl of coffee. The impact jars her, and jostles the bowl, which sloshes coffee onto her hands. Then the encounter ends, and she continues on to the barn.
This cut to her hands effectively shows the violence of the slap – it conveys the impression of violence through the motion of an inanimate object. It even conveys the pain of the slap, because that coffee that splashes her hands is hot. As with the decision to show horses rather than the knights in Lancelot du lac, the viewer is not robbed of any knowledge or appreciation of what he or she might deem more relevant at the moment by not showing that thing; they are told about that thing by showing what Bresson calls “fragments of reality” which combine to depict an event, and eventually a progression of events.
Up to that point, the hot coffee splashing bare skin is the most violent image in L’Argent, a film that has previously included a bank robbery and a car accident. The bank robbery and its aftermath aren’t shown, but we do hear a long volley of gunfire – a powerful sound that Bresson does not match with a notable image: it rumbles over a simple image of Yvon, the would-be getaway driver, behind the wheel of a car he’s about to crash. (We do see the crash, but that’s just the violence of metal on metal. There’s nothing about wounded flesh, either shown or implied.) All this in a film, were it not for the occasional spurting blood of Lancelot du lac, that would easily be Bresson’s most physically savage.

L’Argent ends in a slaughter, none of which we see straight-on. But after losing his job because of the counterfeiting charge, Yvon’s life falls apart. When he’s in prison for taking part in the bank robbery, his family, his wife and daughter, evaporates, for reasons understandable and tragic. There is nothing, so that when he’s released he’s willing to let the violence inside come out as he cruelly seeks money where his blood-stained hands can grab it. Which sounds very dramatic, and which is not even wrong. Yet L’Argent proceeds in small moments. Even the murders are shown in small moments, and of course the people playing the characters – I do not say “actors” and I probably shouldn’t have said “playing” – engage in none of what Bresson called the “voice modulation” or “useless gestures” or traditional film actors. His “models,” as he called them, indeed were not actors. With few exceptions (most notably Dominique Sanda, who started with Bresson), the screen credits of the stars of Bresson’s films begin and end with whatever Bresson film they appeared in. And indeed, as Bresson himself admitted, they’re not acting. They are part of the many visual and an audio components that comprise his shots, scenes, sequences, films. This sounds almost mercenary, but isn’t. As Bresson says in the Ciment interview, it’s all part of his precision, which I’d also call his sort of streamlined otherworldliness (Bresson often claimed to be depicting reality; how exactly he was defining “reality” gave him a lot of room to move, but sometimes he seemed to think he was achieving something close to a kitchen-sink reality; with L’Argent he certainly wasn’t doing that, which is something I do not care about). His very complex films, and they don’t come much more complex in Bresson’s filmography than L’Argent, are simplified by these non-performances – they’re not even lean, they’re not even stripped down – in that none of the fat of film acting is there to be dealt with, but it also deepens the strange intricacies of Bresson’s aesthetic. It’s strange and intricate, of course, because we’ve been trained to see films and film acting in a way that is anathema to Bresson, but Bresson is virtually alone in the history of more-or-less traditional narrative filmmaking to whom it is anathema. And this is all at its most interesting and absorbing in L’Argent for a variety of reasons, chief among them the presence of a little girl and a dog. Neither of them are actors, but neither of them are Bresson’s models, either. The little girl, who is maybe four years old, plays Yvon’s daughter. She’s not in it much, only two scenes I think, but in both she greets the stone-faced Christian Patey with a wide-open grin, that is utterly, unfakeably sincere. She is the only human being who gives the audience a shot of real movie emotion, but it’s not performative. She’s not a child actor. Bresson instructed his models not to act; I imagine he didn’t even bother telling the little girl.
And not to sound glib, but the same goes for the dog. It’s one of the wildest images I’ve seen in a Bresson film: during Yvon’s violent climactic rampage (during which I feel, I remember, only seeing two human faces, though I don’t know if I’m right about this), the dog that belongs to Yvon’s victims is running madly through the house where it’s all taking place, whining and crying and in a complete panic. It’s chilling and heartbreaking, and it stops your breath. That this dog is not attacking Yvon is surely lost on him – even the dog doesn’t have Yvon’s kind of violence in it. Then again, the dog is about to find itself cast out of its comfort, as Yvon was, and then what’ll it do? The poor thing won’t even know that it doesn’t have any money.
Robert Bresson must be among the most perplexing directors in history. There is certainly no one else like him (though some, like Steven Soderbergh with Bubble, have tried to get at what Bresson got at), and to walk into one of his films from, say, the 1950s, and increasingly so as he went along, ending with L’Argent, his last film, without any sort of guide is to more than likely find yourself lost. Narratively, he’s not particularly hard to handle, but in pretty much every other respect the question the uninitiated must ask is “What is he doing, and why is he doing it like this?” Bresson’s book, Notes on the Cinematograph, is a series of aphoristic statements the ultimate goal of which is to create a guide to filmmaking (this is, admittedly, merely one way of putting it). What it achieves instead is an explanation of Bresson. A complicated and enigmatic explanation, but nonetheless a solid one, one that can be held in our hands.
Posted by bill r. at 11:05 PM