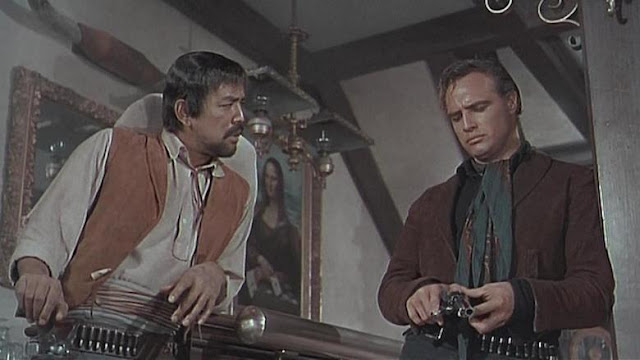 One-Eyed Jacks (d. Marlon Brando) - I'm not entirely sure when I first saw One-Eyed Jacks, Marlon Brando's singular Western, his one and only film as a director, but I was probably just old enough to appreciate it. The problem has since become that for many, many years it's only official home video release was on VHS. Due to what I have to assume are all sorts of reasons, the rights to the film subsequently fell into the public domain, which means that very few cared about it. But the drive to save, preserve, and restore films of the classic era -- from the silents to I'd have to guess the 60s -- has ramped up in intensity over the last decade or so, and with the help of Martin Scorsese and Steven Spielberg, as is the specific case here, the people doing the actual hands-on work have been able to pull many films back from the precipice. Including, I think I hardly need say, Marlon Brando's One-Eyed Jacks, which as of yesterday is out on fucking Blu-ray, from fucking Criterion. Forgive me, but I have been waiting a long time for this.

And watching the film for the first time since the VHS era has been, let's say, rewarding, because while I used to think One-Eyed Jacks was that good, it turns out it's actually this good. In plot terms, this is a fairly basic Western revenge story (based on a novel called The Authentic Death of Hendry Jones by Charles Neider which itself was inspired by the legend of Billy the Kid, a legend that has no actual bearing on this movie, but anyhow, please ignore me), what ends up happening in One-Eyed Jacks is Brando uses basic genre ideas to, not create, but insist on the power of formulaic myths. That's a compliment. The plot's this: Rio (Brando) and Dad Longworth (Karl Malden) are bank robbers. After a job with partner Woody Strode, who lasts a few minutes, they get into a serious bind, and the plan is, Dad takes off with the money to buy some a horse to replace the one Rio lost and come back so the two old friends can flee the law together. But for a variety of reasons, Dad doesn't come back, and Rio goes to prison. Then, with new friend Modesto (Larry Duran), Rio escapes from prison, with the single goal of tracking Dad down and killing him. He finds Dad because a couple of bank-robbers led by Ben Johnson want the help of the legendary Rio, and know that he's been asking around about the target of his revenge.

And so one thing leads to another. It's not too very long into the 140-minute film that Brando and Malden meet up again as hunter and prey, and in a scene where Brando, who lies to Malden about what he's been up to for the last five years, shares a glass of tequila with the man who left him behind, but who might actually buy into Brando's "you and me are okay" spiel, it occurred to me that pure cinema is and was achieved when Marlon Brando and Karl Malden were in a scene, any scene, together. Furthermore, later, Karl Malden, during a suspenseful chunk of that One-Eyed Jacks last third, rides along a ridge above a gorgeous VistaVision crashing waves, and it's as languorously beautiful and slow a moment during a period of rather heightened suspense as I can imagine. In an extra on the Criterion disc, Scorsese says Brando waited for those waves a long time. And it works, don't it? Most importantly, though, Brando, as Rio, plays the film hero as a figure of massive physical menace. I'm not sure Brando is as in love with Rio's drive for revenge -- in the face of other things the film is offering to him, anyway -- as, well, I was, and those doubts, my doubts, set in when I saw how ruthlessly Brando was playing it. He has moments when he's past reason, is on the edge of violence. In every instance, I hated -- and I suspect you do or will, too -- the men he's about to hand back a handful of their own brains. This doesn't mean Brando's Rio isn't unnerving in his heroism. Which should not suggest to you that he's not the hero. 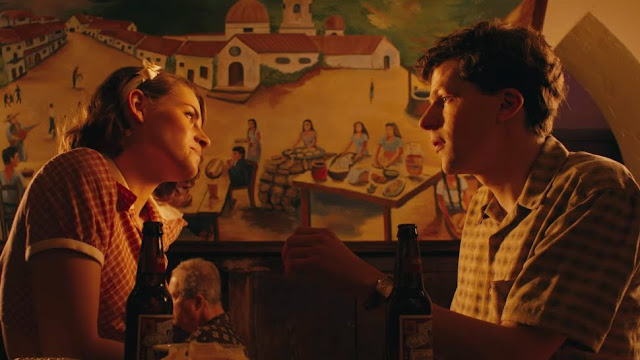 Café Society (d. Woody Allen) - So it's fair to say, I guess, that Woody Allen's career since, arguably Bullets Over Broadway in 1994, has been the most contentious period in his nearly fifty years as a filmmaker (it would be exactly fifty if I was counting What's Up, Tiger Lily?, a film I like but which I can't pretend is the work of a director). Since then, some films, like Sweet and Lowdown and Midnight in Paris, have been widely embraced, while others have had at least the good fortune to be divisive, like Deconstructing Harry and Melinda and Melinda, while many others -- Hollywood Ending, Anything Else, Whatever Works, The Curse of the Jade Scorpion -- are basically despised. I myself, a defender of some of the unbeloved Allen films of this period (I like Scoop and think Cassandra's Dream is pretty danged good), made it only thirty minutes into Whatever Works. But I do think, overall, his films since 1994 have been, on average, better than popular opinion would indicate (though even the positive reactions can get iffy: in my view, relatively appreciated entries like Match Point or Blue Jasmine are marginal. It's possible aesthetic opinions are very personal, who among us can say?). We may never know why this has happened.

In any case, as I've said, I think there's lots to admire in this stretch of films, and in fact last year, Allen's Irrational Man, one of his "murder" films (a clutch of movies that I find among his most intriguing) played for me as a deeply clumsy yet fascinating moral investigation. Most people hated it because, from what I could see, they badly misunderstood it. Still, though: clumsy but fascinating is one thing -- what was Allen's last great film? As it happens, I have the answer: 2016's Café Society is the best thing Allen has not only written, but directed, in I don't even know how long. A 1930s Hollywood-set love-triangle that features Jesse Eisenberg as an initially naive (but not entirely likable, as an early sketch-like scene between him and a prostitute played by Anna Camp, indicates) young man trying to find his way into the movie business through his hugely successful producer uncle (Steve Carrell), Café Society suggests, quite strongly, that Allen, who has, it must be said, long ago abandoned any claim to being well-acquainted with modern society (I do not consider this an unforgivable artistic crime) should focus now on period pieces.

It's also one of his better-plotted films in a long time, as well. The center of the love triangle is Kristen Stewart, Carrell's assistant with whom he is cheating on his wife, and with whom Eisenberg falls in love. There's also a gangster subplot involving another of Eisenberg's uncles (one of the great ancillary pleasures of Café Society is its occasional shifts back to Eisenberg's blue collar and/or gangster Jewish family in New York), which begins as a lark but transforms into something else. While remaining within the boundaries of the PG-13 rating, there are a couple moments of surprisingly blunt violence, which in turn help to turn Café Society into something resembling a mix between Crimes and Misdemeanors and Purple Rose of Cairo. On some level, that latter film is the more interesting link (if I do say so myself) to this new film as it's been a very long time since Allen has been able to connect to the kind of average human life depicted there. Cairo and Radio Days are his masterpieces in this respect, and he's not too far off it in Blue Jasmine, in all fairness. But with Café Society, which is mostly concerned with the high-life of Hollywood, manages to quietly show the tension between these different sorts of lives. Which is largely what Purple Rose of Cairo and Radio Days are also about, while also being utterly gripping and visually beautiful, entertaining movies. As is Café Society. When you make as many movies as Woody Allen, the argument goes, you're not going to be able to tend to each work as closely as you should. But apparently, sometimes you can manage it. 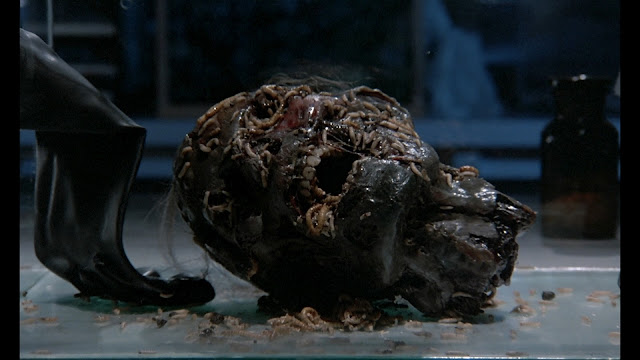 Phenomena (d. Dario Argento) - Though a long-time Argento skeptic -- I love Suspiria, was bored sideways by Opera, have perhaps not chosen entirely wisely when selecting the other half-dozen-or-so Argentos I've seen -- I nevertheless have been genuinely and sincerely excited to see this one, from 1985, for a very long time. The problem has always been that for many years its availability as a home video item has been dicey, and those VHS and DVD releases it's enjoyed have not, I'd gathered as I kept my eye on things, told the full story of Phenomena. A film whose reputation, at least among fans and critics interested in horror, is that of a film which is utterly sui generis, thoroughly insane, and the work of an individual artist who, for good and ill, is following his vision wherever it may lead him. "Off a cliff" is always in the cards.

And yet, no. Before explaining why not, I should probably say that Phenomena is a horror film about a young teenager (Jennifer Connelly, fifteen at the time, and whose admirable refusal to buckle to certain requests kept the film from being a uncomfortably prurient as you might justifiably have feared from Argento), the daughter of an Italian movie star who winds up in a girls' school in Switzerland. That's actually not the problem though. The problem is that someone is serial murdering the students at this school. Homicide detectives have indeed been summoned, including Inspector Geiger (Patrick Brachau). Geiger is hoping the expertise of local entomologist McGregor (Donald Pleasance), who is studying, via maggots, the forensic evidence made available by the previous beheading murder, will, with the help of his chimpanzee best friend....

Hm. Also, Jennifer Connelly's character (named Jennifer, let's not make anything out of that) loves and is worshiped by insects. And my concern is that certain members of its cult love it because they think it's "so bad it's good." To be sure, it is utterly ridiculous. And I absolutely laughed at things Argento may not have wanted me to laugh at. But it's well made, and in its own way Phenomena is no less a jarring look into the brain of a singular filmmaker than Eraserhead. Besides which, it's so much fun. Phenomena ends many times, but each time I realized that one climax was going to droop and then build into another, I didn't sigh impatiently. Instead I thought "Oh good!" And I was never disappointed. Plus there's a chimpanzee who thinks she's people.
Posted by bill r. at 8:14 PM