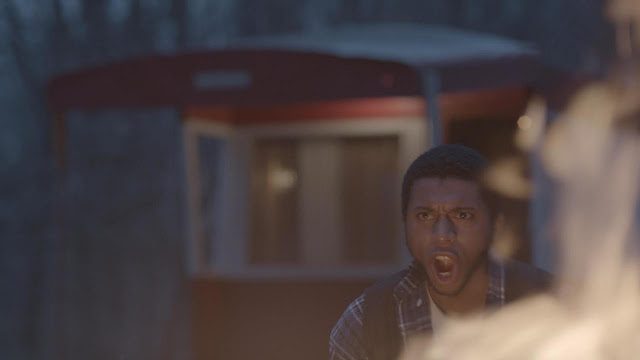 The Alchemist Cookbook (d. Joel Potrykus) - In 2012, Joel Potrykus made his feature film debut with Ape, about a struggling stand-up comic, played by Joshua Burge, who gets angry a lot. I thought it was awful, and found his 2014 follow-up Buzzard, also starring Burge and angriness, to be not much better. These movies complete Potrykus's, I guess, "Animal Trilogy" which began with a short film called Coyote, which I haven't seen and which Wikipedia describes as a "minimalist werewolf film." There are tinges of horror in Ape (there's a devil figure, of sorts) which are jumped up a bit in Buzzard -- a major element of that movie involves Burge's character adding Freddy Krueger knife-claws to a Nintendo Power Glove, and eventually using it. That last bit might you some idea of where Potrykus's brain's at, decade-wise. In any case, both Ape and Buzzard are fundamentally juvenile in a way that suggests Potrykus believes that he's grown up, and one thing you do when you grow up is you make genre films that tear the guts out of "traditional" genre films and show what's really behind them.

Hence The Alchemist Cookbook, which is I suppose technically his first horror feature. It stars Ty Hickson as Sean, a young man recently released (escaped?) from prison, who is now hiding out in a trailer in the woods, where he conducts obscure experiments which seem to be equally scientific and occultic. Mostly alone save for his cat, he is occasionally visited by his old friend Cortez (Amari Cheatom), who brings Sean food, supplies for his experiments, and Sean's medication. The moment that Cortez realizes he forgot to pack that medication, the rest of the film that follows this moment has been explained to us.

The one positive I could find in Buzzard and Ape was Joshua Burge, who is, I think, very good in both, and once again the disaster of The Alchemist Cookbook can't be blamed on Hickson (or Cheatom, but Hickson's basically it for the whole show). But like Burge before him, Hickson has been burdened with a bunch of bullshit to do. In Buzzard, Potrykus films Burge eating spaghetti and meatballs for minutes on end, apparently to prove to his audience that he will put something like that into one of his movies. His weird and unamusing relationship to things that are ingested continues here: one scene holds on Hickson eating many Doritos in a row. A "funny" scene involves Cortez proving that the incorrect cat food he brought is fine by, now get this, I'm not kidding, this is just how crazy Potrykus is, eating it himself. (Because Cheatom was very clearly eating ordinary canned tuna, I had a tough time believing it was as rancid as Cheatom was told to pretend it was.) Another scene in which Hickson guzzles juice is foley-ed almost to death. Does Potrykus think it's funny or edgy to make it sound like instead of a man swallowing juice, a walrus is swallowing blended-up penguin? I can't imagine his motivation, but it seems to be his big move.

Eventually the "horror" (Sean thinks he's summoned a demon or whatever) asserts itself, or fails to do so, and the emotional climax is reached in a monologue delivered by Sean in which he imagines what his perfect world would be. It would involve things like unlimited Capri Suns and I think Cap'n Crunch, and he probably at some point mentioned Snarf from Thundercats. It's an embarrassing scene, and I can't imagine caring what Potrykus does next. 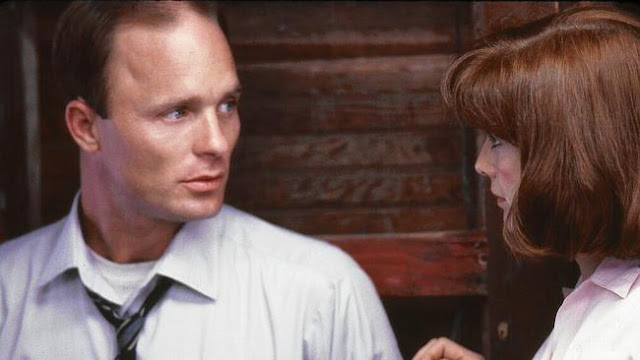 A Flash of Green (d. Victor Nuñez) - The crime writer John D. MacDonald wrote something in the neighborhood of 60 books in his lifetime (he was 70 when he died, so put those numbers together and have a long hard think about it all). Though he's best known for his series of novels about the noble houseboat detective Travis McGee, The majority of his books were written before he wrote The Deep Blue Good-by in 1964. "Prolific" may not even begin to cover this. Anyhow, among the three novels MacDonald published in 1962 was A Flash of Green, not a crime novel, but a social problem novel that uses certain criminal acts to drive the plot. I recently read this book, and while I'd count myself as a wary fan of MacDonald (I've read bad, I've read good), I found A Flash of Green to be close to disastrous. Using the conservation of nature as his theme (something MacDonald, a Floridian who was aghast at the relentless destruction of the natural world he'd grown up with, would build his novels upon throughout his career), the novel A Flash of Green is a series of speeches about ethics and feelings and explaining exactly what all the characters think at all times. The dialogue in this novel is relentlessly unconvincing, and often appalling, and, on top of that, usually telling the reader about things that happened, when the reader might have actually been given a first-hand look, had MacDonald not been so busy writing lines like (paraphrase, but not by much) "I fell in love glamorous lady called the newspaper game." (This leads to cynical thoughts about that newspaper game, if that helps at all.)

In 1984, the director Victor Nuñez adapted A Flash of Green as a film. Outside of festivals, its release to the public was as an episode of American Playhouse, which makes very little since to me (it was released on VHS, but no other form of home video since then), but there you go. Nuñez's career has always struck me as that of an honorable filmmaker who has always struggled. He had a brief period of semi-prominence in the 90s, with Ruby in Paradise, which more or less introduced Ashley Judd to the world, and Ulee's Gold, which briefly boosted Peter Fonda. But his adaptation of A Flash of Green may stand as his most interesting film. It's better than the novel, to begin with, by a lot, the casting is exquisite, and Nuñez, as the screenwriter, absolutely hacks to the bone all the shit MacDonald couldn't shut up about.

The basic story is, a bay in a small Florida town is being threatened by local businessmen and government who want to develop it. Kat Hubble (Blair Brown) is a prominent member of the group who strives to stop this, and she enlists the help of her late husband's best friend, reporter Jimmy Wing (Ed Harris). Unbeknownst to her, not only is Wing in love with her, but he's also in the pocket of Elmo Bliss (Richard Jordan), the man behind the development plan. Bliss has hired Wing to dig up dirt on the conservationist group so that he can blackmail them into backing off. Wing does his job.

Jimmy Wing is the most interesting part of the novel and the film, and casting Harris in the role was a masterstroke. The tortured, lustful, everyman cynicism that is the root of the character is also, arguably, the root of Harris's genius as an actor. Add to this Nuñez's minimalism, which is not so much at odds with MacDonald's maximalism as it is a force that completely dominates and reconfigures this story. Surprisingly, Nuñez adheres very closely to MacDonald's plot -- there's some combining of storylines and characters, but that's about it. Nuñez's great achievement as a writer here is how he slashes the dialogue, and turns MacDonald's endless moralizing into searching, hesitant, simple everyday language. The film is a wonderful transformation.
Posted by bill r. at 8:59 PM