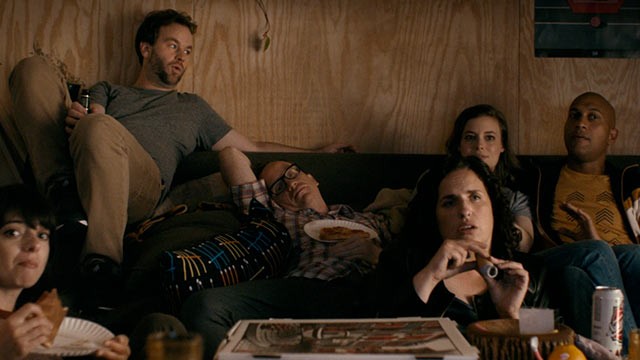 Don't Think Twice (d. Mike Birbiglia) - Back in 2012, when writer-director-comedian Mike Birbiglia released his first film, Sleepwalk With Me, which was I think the fourteenth iteration of his collection of stories about how he is a sleepwalker and is a comedian and cheated on his girlfriend, I was not unwilling to give him the benefit of the doubt. I'd enjoyed what I'd heard of his one-man-show version of the piece, and while the existence of the film did make me wonder just how dead one horse could possibly be, I wasn't actively offended. Then again, that film did do the job of blotting out Birbiglia's name from my wife's memory, theretofore a burgeoning fan, and it did make me question whether or not, as the "film" "played out" before me, I had actually been witness to anything at all. Was I dreaming? Was I, in fact, the real somnambulist?

In subsequent years, Birbiglia's cult/arthouse star has risen, due to his touring, and hitching that star to fucking Ira Glass of all people, such that his new film as the writer, director, and co-star, Don't Think Twice, arrived as kind of an event, I guess. Or it seemed that way because a lot of people liked it. And even though, as Don't Think Twice collected one hosanna after another, Birbiglia decided to present himself on social media as a latter-day John Cassavetes, savior of independent cinema -- a disingenuous bit of play-acting that is utterly noxious in its Swanbergian aspect -- I was, once again, willing to see what was what. The premise certainly intrigued: there's this improv troupe called The Commune, working out of New York City. The struggling six members -- Keegan-Michael Key, Gillian Jacobs, Tami Sagher, Chris Gethard, Kate Micucci, and Birbiglia -- spend all their time together, work demoralizing day jobs (though Sagher's family is rich), and wait for another chance at a big break. Which comes along in the form of being looked at by scouts from Weekend Live, that famous sketch show. Two of them actually get auditions, and one of them, Key's Jack Mercer, lands the gig. Meanwhile, the troupe's theater space is shuttering, and what will become of them?

Well, who gives a fuck? The first problem with Don't Think Twice is that it is never funny. It is never funny. Even if Birbiglia's goal is find the pain in comedy, he wants the audience to embrace the comedy of, I don't know, pain? as well. Yet The Commune is murderously unfunny, not only on-stage but off. The film is never more painful than when Birbiglia is trying to depict how a bunch of comedian friends interact with each other, how they're always joking and laughing, life is the ultimate improv really, etc. What this consists of, for example, is one of the troupe, Gethard, showing up to their apartment having missed that night's show. He says "I'm sorry" and the other five start teasing him. What form does this comedic teasing take? All of them say "I'm sorry, I'm sorry!" and make clownishly sad faces. In fact, a lot of the troupe's inside jokes consist of gibberish, or repeated words and mugging faces. I'm actually forced to wonder if Birbiglia has any friends. I guess he probably does, but if he doesn't, I get it.

And it's not like he saves the day with his filmmaking. As a piece of direction, Don't Think Twice might be a step up from Sleepwalk With Me, but only because Birbiglia the actor often cedes the floor to better actors than he (though check him out at the end in a scene where he's supposed to be furiously aggressive -- you'll not be reminded of Michael Shannon, let's say, or of anger, the emotion) and because technically I suppose he, Birbiglia, the director, is trying something. The problem is that all he's trying to do, outside of some weird close-ups (check out the scene between Gethard and his character's father outside a club) that achieve an effect that I do not believe was desired (that effect, incidentally, is one that suggests that all Birbiglia could think at the time was that sometimes close-ups are used in movies) is be and look and feel like every other "poignant" indie hand-held-camera DVD-sinkhole-bound sleepy blink of a goddamn movie of which we get upwards of fifty-some titles a year.

I mean, it's not like Birbiglia cares. If you don't believe me, watch the movie, and look for a scene late in the proceedings, featuring Micucci, Sagher, and Gethard. They're backstage (talking about the importance of improv comedy, in case you were wondering), and Sagher hands Gethard a framed picture. When the camera cuts to Gethard holding the picture, talking about what it makes him think about and feel and so on, the back of the frame is facing the camera. He's holding the picture upside down.
Posted by bill r. at 9:25 PM