Without a Gun, You Can't Survive

Recently, Arrow Video released a trio of crime films which were, in the 1950s, released by Nikkatsu, the oldest Japanese film studio. The set is called Nikkatsu Diamond Guys Vol. 1, and it includes three examples of the kind of crime film on which the studio built its reputation (Criterion's Eclipse series has also plundered Nikkatsu's crime catalogue for its own set). I've seen the films, and I might as well, in the interest of positivity, take them in ascending order of quality.

The Rambling Guitarist (d. Buichi Saito) - The first thing one notices with this particular film, or among the first things, is how sharp the Blu-ray transfer is. It's in color, and pretty brightly in color at that. In fact, if I was pressured into singling out one great aspect of this somewhat wonkily clumsy film, it would be Kurataro Takamura's cinematography, which, quite frankly, looks terrific. This is a crime film that wants to be a Western, and if director Saito is confused as to what he's on about, at least Takamura knows what's what. The transition from the early scenes, which show the aforementioned rambling guitarist, named Taki (Akira Kobayashi), exiting the hay-truck from which he'd hitched a ride to find himself in a sleepy yet industrious fishing town and almost immediately embroiled in the ruthless (but, it seemed to me, rather small-time) criminal goings-on, these scenes, as I say, the transition from the sleepy Western vibe to a sleepy murderous vibe, is quite smooth. From a cinematographic point of view, anyway. Taki's life as a guitar-strumming balladeer doesn't hurt, nor does his evidently unstoppable fighting skills. A lot of Westerns are essentially crime films anyway.

But to be frank, The Rambling Guitarist is pretty stupid. It contains, in fact, one of the stupidest things I've ever seen in a film. You know that cliche, where you have two guys who are facing off against each other, and they're both deadly, and they both have guns, or knives, or whatever, and in the film, during the showdown, they each go for their weapon and the film cuts to something else. Then after a  bit we see one of the guys enter the frame, walk into the room, whatever, and you're like "Oh he won I guess" but then blood starts to drip out of his mouth and he collapses, and you're like "Oh no, the other guy won, but the mortally wounded dude just walked out of the room first." You know that cliche? Well in The Rambling Guitarist, that showdown occurs on a boat which is at sea. Cut from two guys drawing guns to a nightclub on land, and one of the two guys, looking pretty sharp, walks in. Then the blood drips out of his mouth, etc. How many hours did he have to tamp down on that? "Okay, I've been shot, I'm going to die. Can we just get this boat back to land real quick? I want to die in a nightclub."

It's a fun movie, but stupid. 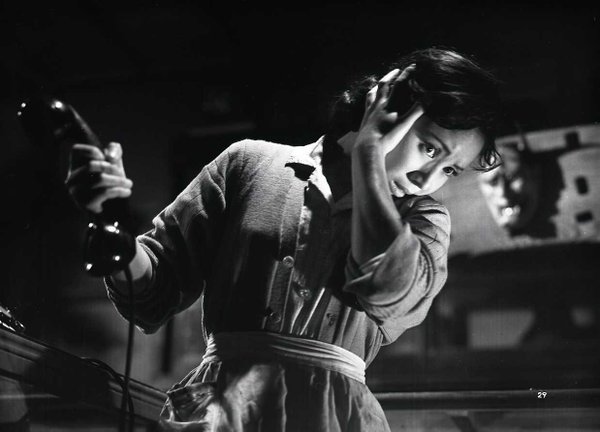 Voice Without a Shadow (d. Seijun Suzuki) - Suzuki is probably best known for Branded to Kill, a film the plot of which depends, at least at one point, on where a butterfly alights. The style of Branded to Kill supports this decision, and I do consider that 1967 movie to be pretty terrific. But it's a weird one, a near-Godardesque wallow in, homage to, and mockery of American film noir archetypes, plots, and so on. That was a Nikkatsu film too (as was Tokyo Drifter, also odd, but less odd) and the story goes that it's weirdness, and financial failure, ended up getting Suzuki fired. And while Branded to Kill is certainly a leap in strangeness from, say, Tokyo Drifter, I feel like you can start to map out where Suzuki was heading with this, with Voice Without a Shadow, which was his tenth film, after three years in the business.

The visual style of Voice Without a Shadow isn't especially crazy -- it is, in fact, fairly straightforward. What crazy is the narrative itself, and this is a plane of experimentation that clearly interested Suzuki,if not as much as the cinematic language of it all, then at least interested him on some significant level. The plot is, a switchboard operator (Yoko Minamida) accidentally overhears a murderers voice. Nothing comes of this at the time, but three years later, among the businessmen who play marathon rounds of mahjong with her husband, she hears the voice again. But here's what's strange: the stage has not been set for a Hitchcockian cat-and-mouse thriller. That this woman sort of has superhuman hearing is sort of the "hey I found some stolen money" plot device. In and of itself, it means nothing. In fact, the man whose voice she heard is soon murdered, and from their Voice Without a Shadow becomes a murder mystery, and Minamida's heroine takes second place to an intrepid reporter (Hideaki Nitani).

If you step back from Voice Without a Shadow, it's quite impossible that the plot can proceed in quite this way, yet it does. And if you accept that the plot will and can proceed in this way, then certainly the visuals, the movieness of it all, will reflect that, yet it does not. The crazy plot is presented without a blink. And it's fun. But Suzuki was just getting ready.

Red Pier (d. Toshio Masuda) - Which brings us to this, the best film in the collection. In a walk, I'm tempted to say, though my enthusiasm might well be explained entirely by the fact that Red Pier is by far the most noir film of the lot. But of course, its noirness would mean nothing if it was otherwise garbage, which it isn't. Director Masua is known best as the director, along with Kinji Fukasaku, of the Japanese sections of 1970's Tora! Tora! Tora! And that's all I knew of the man's work prior to watching Red Pier, which is as naturally and gracefully infused with the spirit of American noir as The Rambling Guitarist desperately insists it must be, but isn't.

As a story, it's classic: a dockworker is murdered, and the man behind it is a cool hitman named Jiro (Yujiro Ishihara) who we will come to regard as perhaps less evil than we'd thought. Which isn't to say he's justified in any crime we see him commit. He becomes romantically involved with the sister of the murdered dockworker (who was running drugs to support his family), and eventually finds the frail criminal code he'd clung to but probably couldn't logically explain, falling apart, leaving him exposed in almost every possible way. I'd say that Red Pier could be more passionate, and it's ending is certainly a bit soft, but it's quite beautifully shot, and entirely engaging in its main plot, and its variously organic subplots. There's real emotion here, and it's honestly about crime and criminals, which I'm not sure I can say about either The Rambling Guitarist or Voice Without a Shadow. It's the most genuine piece of genre art in the set.
Posted by bill r. at 9:40 PM