Earlier this week, Arrow Video released volume one of their new American Horror Project. This set of three films is meant to bring largely forgotten horror films back into the home video mix. I watched all three of these movies, you guys. Check it out, bros. 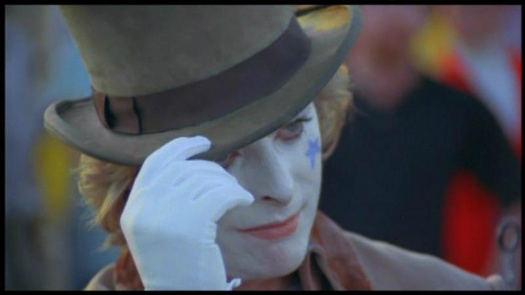 The Premonition (d. Robert Allen Schnitzer) - In his introduction to this 1976 film, one of only three that Schnitzer has directed, the curator of this set, Stephen Thrower (he does one for each movie) points out that it wasn't until sometime in the 1980s that the focus in horror on young people -- you know, teenagers and whatnot -- as the lead characters really became a nearly unavoidable tradition. As evidence that things used to be different, Thrower points to The Premonition, the plot of which revolves around two couples: Miles and Sheri Bennett, played by Edward Bell and Sharon Farrell, who have a young adopted daughter, and Jude and Andrea, played by Richard Lynch and Ellen Barber, who are the biological parents. Lynch and Barber now want the child back, and they are both apparently psychotic.

The Premonition does have a supernatural element, and it's of the sort hinted at in the title. Sheri is some kind of psychic, and her visions tell her that her adopted daughter is in terrible danger. Her husband Miles also happens to be a science professor at a nearby college, who has recently been working with a psychic researcher named Dr. Jeena Kingsly (Chitra Neogy). Anyway, as a result of this particular plot, The Premonition plays for the most part like one of those "supernatural thrillers" they make sometimes -- not quite horror, in other words, though at this particular moment in time I'm not interested in having that argument (though the film's climax does quite intentionally recall Hitchcock's 1956 version of The Man Who Knew Too Much, which I believe says something about Schnitzer's overall genre intentions). Where The Premonition tips into horror is in its depictions of Jude and Andrea, and of the performances given by Lynch and Barber. Both of them are outstanding and terribly nerve-wracking, and Schnitzer shoots them in a way that maximizes their eeriness. There's a scene where Sheri walks into her daughter's bedroom to find Andrea sitting in a chair, in the dark, holding the child. There's no music sting, and Barber's face is so peacefully terrifying, and Farrell's reaction so visceral, that it looked and felt just like I imagine such an even would play out in real life.

While the ending means to evoke Hitchcock, it does so in a sort of limping, anticlimactic way, and so in some respects The Premonition doesn't quite get where it's going. But that mostly doesn't matter. The best and most surprising aspect of the film is the way it catches real moments of human behavior, and throws away details that a more predictable film would turn into the whole shootin' match. In one scene, after work Miles and Dr. Kingsly go to a nearby carnival to hang out and talk about their project. On the Ferris Wheel, we see Dr. Kingsly look down and notice, for the first time, that Miles is wearing a wedding ring. Her face registers disappointment, and that's it. That's the end of that. It doesn't change how she acts, she doesn't try to steal him, he doesn't suddenly fall for her, and none of it ever comes up again. It's a misunderstanding. How often does any movie include something like that?

The Witch Who Came from the Sea (d. Matt Cimber) - If The Premonition intends its climax to resemble The Man Who Knew Too Much, this film, also from 1976, maybe just happens to resemble George Romero's Season of the Witch (aka Jack's Wife) and Meir Zarchi's original I Spit On Your Grave. But actually, The Witch Who Came from the Sea chronologically falls between those two, the Romero preceding it by three years, the Zarchi succeeding it by two. Even so, those're the two that leapt to mind as I watched this strange story about a wounded woman turned psychotic killer.

It stars Millie Perkins, best known for starring in George Stevens's The Diary of Anne Frank and appearing alongside Elvis Presley in Wild in the Country (she's also in one of my favorite films, Monte Hellman's The Shooting). That connection to Old Hollywood alone puts me in mind of Camille Keaton in I Spit On Your Grave, but as you discover that her character Mollie suffered some terrible trauma at the hands of a man, and that her continued seduction of a variety of men (famous men, which is a curious (but not exactly significant, I don't think, in terms of theme) part of the film's atmosphere) is just a means of making them helpless enough to murder them, and what the most brutal of those murders involves...well, it's not hard to think maybe Zarchi saw this before he made his infamous film.

As for that Romero film, that connection comes not just from the feminist angle The Witch Who Came from the Sea shares with it, but also because the kind of casual, rambling, grainy, everyday quality that made pre-Creepshow Romero so distinctive. Matt Cimber aspires to that, anyway, and sometimes gets there, but The Witch Who Came from the Sea can't find the verisimilitude that Romero could. Instead, it tries to blend that idea with a surrealness that it just can't pull off. This is highlighted by an ending that is meant to be shocking yet believable, but fails to be either because there's absolutely no way what happens would ever be allowed to happen by the characters in the scene who could prevent it. Vague, I know. But the ending is a mess. Throughout the film, however, Millie Perkins is kind of great. 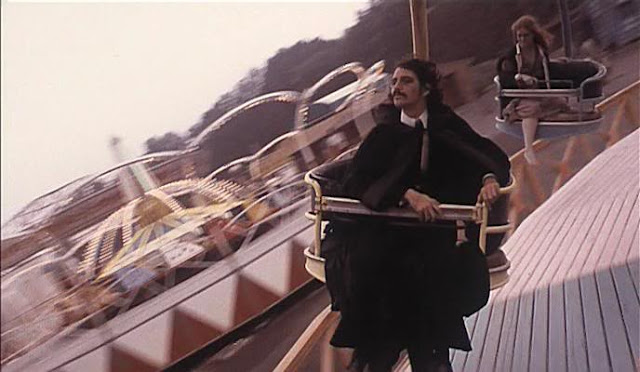 Malatesta's Carnival of Blood (d. Christopher Speeth) - And what to say about this one? If each of these capsule reviews seems to revolve around me connecting the films under discussion with a variety of other horror films, well, feelings is feelings, and in this case, a 1973 film whose title invites the reaction "Mala-whos's carnival of blood??" almost immediately made me think of Herk Harvey's classic Carnival of Souls (for perhaps obvious reasons, but also because Jerome Dempsey as "Blood" in this film resembles Herk Harvey as "The Man" in the earlier film) and the less well-known, but ingenious, Messiah of Evil, from 1973, directed by William Huyck and Gloria Katz. Of the three, Carnival of Souls is the most plot-heavy, and if the only one of the three you've seen is Carnival of Souls, I'm sure you can imagine what that means for the other three.

These are all part of the genre you might call "mood horror," or something like that. Early on, Malatesta's Carnival of Blood appears to take some swipes at telling a story, but it's very clear that Speeth, who has yet to direct another film, could, when it comes to plot or any kind of straight narrative, kinda sorta not give a fuck. For the brief period of time during which he acts as though he does, Malatesta's Carnival of Blood is at its worst. The "plot" is, there's this weird carnival, and the season is starting, and these people show up to work as carnies, and among them is a family -- a mom, dad, and adult (or teenage) daughter) -- who know that this is an evil carnival run by evil people, and one of their own has been consumed by it. Cut from that to utter mayhem for 60 minutes.

By "mayhem" I mean utter strangeness, which is at times clumsy, but only because of budget. When Speeth is able to free himself from the confines of plot, which he does as soon as he can, Malatesta's Carnival of Blood transcends its budget of No Dollars and indulges in pure imaginative horror. "To the extent that it can afford to do so," one might say, and sure, that's true. But part of what's effective about this film is that all the zombie-shambling, Medieval hymn-singing, public carnival atmosphere of it all takes place on sets that look like the actual behind-the-scenes grounds of a real carnival. It is a real carnival, but back there is a nightmare of blood that doesn't make any sense. This film is so bizarre. And it's the best of the three.
Posted by bill r. at 10:34 PM