It's been a while since I last wrote anything about Jean Rollin, one of my favorite horror-or-otherwise directors. This is something I used to make a habit of, in large part because Kino Lorber used to make a habit of releasing his films on Blu-ray. That dried up after while but today Kino, as always via their Redemption line, is back on it with their release of The Escapees, Rollin's 1981 feminist, er, crime film? Anyway that, paired with my recent viewing of his earlier horror film The Iron Rose, also available on Kino Blu-ray, has led me here today to offer a few brief words on each. 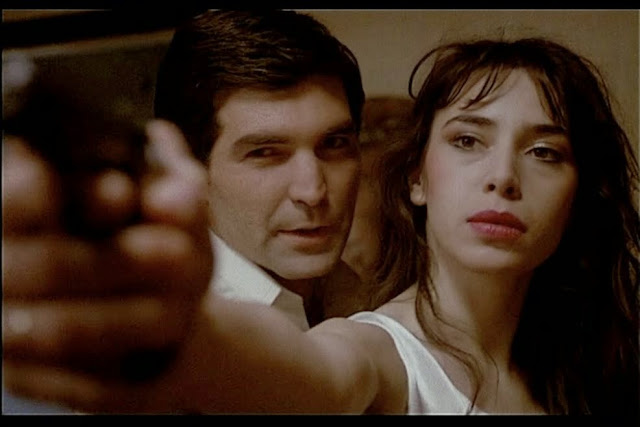 The Escapees (1981) - This film came out the same year as another Rollin film, Zombie Lake, which I wrote about here, and which may be the worst film Rollin ever made. I'd be inclined to give Schoolgirl Hitchhikers a pass over that one, because at least Schoolgirl Hitchhikers feels honest. In any event, the time had come for Rollin to re-energize himself and to do so he would return to a favorite theme, that of two women on the run -- sometimes they're just together, not so much on the run, but here they're on the run. He'd already done this in, for example, Fascination and Requiem for a Vampire, and would perhaps perfect it in one of his last films, Two Orphan Vampires, which The Escapees resembles more than any other Rollin film I've seen.

Unfortunately, The Escapees is no Two Orphan Vampires. It's about two women, Michelle (Laurence Dubas) and Marie (Christiane Coppe) who are inmates in an insane asylum. Marie won't speak and Michelle is full of anger -- we don't know much more about them than that. But Michelle wants to escape and she enlists Marie's help. Insisting that she'll leave Marie behind once they're in the clear, the two women nevertheless stay together, with Michelle's hard edge crumbling to softness any time she sees evidence of Marie's lonely despair. So the two of them go it alone, meeting lots of curious folks at, for example, what appears to be a traveling outdoor carny strip club, as well as various bars, which is a less colorful example. Along the way they fend off unwanted advances, possibly even rape, and come to see possible freedom from the restrictive, abusive "regular" world on a ship sailing to Brazil.

As already noted, The Escapees isn't a horror film and though I don't want to pigeonhole Rollin my reaction is to think "More's the pity." Since it's impossible for me to not compare this film with Two Orphan Vampires, it's also impossible for me to not see The Escapees as a dry run for that later surrealistic masterpiece. Leaving behind the Baroque possibilities of horror seems to have kept Rollin from indulging his genius for bizarre and eerie imagery, though at every turn the film is practically begging to be pushed over the stylistic brink. Rollin never does that, and the film, though not bad, ends up feeling like a curiosity exactly because it's not especially curious. God knows it's an improvement over Zombie Lake, though, and if The Escapees is what Rollin needed to push on to his next film, 1982's brilliant The Living Dead Girl, well then that's just fine by me. 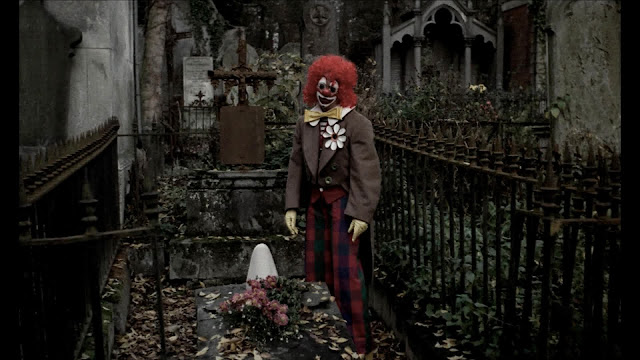 The Iron Rose (1973) - Ah. This, however, this is something else again. With his fifth feature film, Rollin proved with The Iron Rose that he was a horror filmmaker unlike any other. At just 80 minutes and featuring, for all intents and purposes, only two characters, a young woman (Francoise Pascal) and a young man (Hugues Quester), this film is nothing less than a masterpiece, of tone, and chilling insinuation, and terrible mystery.

Being the kind of film it is, the plot is simplicity itself: this young couple decides one day to wander around in a cemetery, maybe have a picnic, maybe even make love in some secluded crypt. Eventually day turns to night and they realize that the cemetery's gates have been closed and locked. What's more, it's a big place, not very well kept up and overrun by old weeds and bushes, and they're kind of lost. Their nerves fray, they lash out at each other, the man's behavior becomes nearly abusive, while the young woman begins acting very strangely. She becomes very interested in the dead around them, and begins talk about them, and death itself, as a kind of real life. But not in religious, heavenly terms; rather, life that is lived in death, in the dirt, underground.

Where this is all going managed to both surprise me and to feel inevitable after the fact. And while The Iron Rose isn't short of strong images, for once it may be Rollin's writing, his prose, that lifts the film above most films in the genre (an absolutely terrific performance by Pascal doesn't hurt anything either). There's a speech late in the film that lays the whole terrible idea of it, the awful poetry of the young woman's strange new desire, which she finds beautiful, wonderful, something she takes delight in. She talks about "the land underneath" and exhorts her listener to "carry your birds of gold"; the language is obscure but the meaning is clear. There's a menace to The Iron Rose that isn't aggressive or even violent. It's not pursuing you. It's not waiting for you. It's not even menacing. It's natural. It just is.
Posted by bill r. at 7:44 PM

Iron Rose is one of his I've been meaning to check out after having a good time with Grapes of Death. I liked that title's flawless combination of beguiling eeriness and "grindhouse" earthiness. This one sounds intriguing even if I sense a slight familiarity in its basic elements--it's style and technique that breathe life into these things, in the end.

Unfortunately, terrible or not, I have to try to see Zombie Lake, too, if only because it's called Zombie Lake.

Even knowing what I know, I would still watch a movie called ZOMBIE LAKE, so I get it.