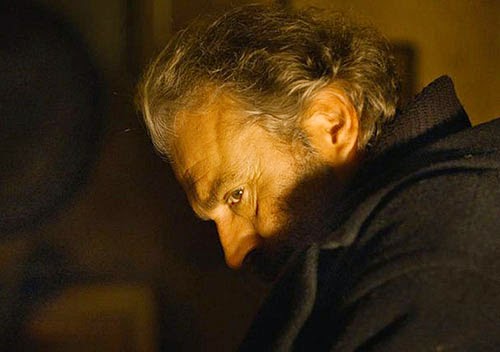 In 2011, three films were released that made a strong argument, for those who needed to be persuaded, and they are legion, in favor of what someone finally decided needed to be called "slow cinema." They were Julia Loktev's The Loneliest Planet, Bela Tarr's The Turin Horse, and Nuri Bilge Ceylan's Once Upon a Time in Anatolia. The Loktev film is a hypnotic parade of nothingness (not an insult) that ingeniously hinges on one rather startling incident, and Tarr's film, supposedly his last, portrays poverty, tedium, and cruelty as a combination that adds up to the Apocalypse; but it was Ceylan's 157-minute breakout almost genre/nearly crime procedural about homicide detectives searching for a dead body in the titular region of Turkey that really announced itself. This is in part because Loktev is still establishing herself, The Loneliest Planet being only her third film, and Tarr could give a fuck. Ceylan, meanwhile, had made five films prior to Once Upon a Time in Anatolia, he was known, admired, and had plenty left to give. Once Upon a Time in Anatolia, which includes a very long shot of an apple rolling down a hill and ends with an extensive (which doesn't meant especially graphic) autopsy entirely lacking in catharsis (not an insult), seemed to be Ceylan's way of announcing that this was the kind of filmmaker he was going to be, now that he was able.

Ceylan built upon this triumph (while also saying "no seriously I mean it") with 2014's Winter Sleep. This film became instantly notorious, or anyway a source of wariness among beleaguered film festival-goers, because of its 196-minute run time, but then people saw it at Cannes, where it went on to win the Palme d'Or, and everything was fine. Because the film, which Kino Lorber has just released on DVD and Blu-ray, is indeed quite long, this is impossible to refute, but for a film constructed mainly of a series of very long conversations and arguments, really moves. I was told it did, and I wasn't lied to. I realize my description probably makes the whole thing sound like some sort of an experiment, which it isn't -- as a drama, in a lot of ways it's pretty classical. So classical that if Ceylan had chosen to pitch his emotions a couple degrees higher (and cut out about an hour) he might have end up with a melodrama. One that is rather more overtly philosophical than perhaps we've come to expect from that form, but still: horrible strife between siblings, a marriage falling apart before our eyes, and class tensions with a potentially criminal element looming in the wings. Everything's there.

But Winter Sleep is pretty damn far from a melodrama. It's about Aydin (Haluk Bilginer), a wealthy landowner of about 60 years of age who rents property (so much that at one point he says he didn't realize another character is one of his tenants, though I'd say this claim is a dubious one) in a
mountainous region of Turkey. Smack in the middle of Aydin's land is the hotel he owns and manages with his much younger wife Nihal (Melisa Sözen). Near the beginning of the film, Aydin and his assistant Hidayet (Ayberk Pekcan) are out shopping for wild horses, in a manner of speaking, because one of Aydin's hotel tenants was recently disappointed to learn that the hotel does not make horses available for riding, despite including a picture of them on the website. The picture is there for local color, wild horses being common in the area, but he comes to believe this was a business miscalculation on his part. Anyway, that's what they're doing when a rock smashes the passenger window of their truck. It was thrown by a young boy, the son of Hamdi (Serhat Kilic), a local clergyman who rents his home from Aydin (and rented it previously from Aydin's father, who we gather has passed away). A subsequent encounter with first Hamdi's brother, an ex-con named Ismail (Nejat Isler) and then Hamdi himself reveals that Hamdi's meager salary has to support Ismail, Hamdi's wife and son, as well as Hamdi himself, Ismail's criminal past and hot temper leaving him unable to secure a job. On top of this, Hamdi -- who, when he finds Aydin and Hidayet outside his home confronting his brother with the broken window and the fact that the young boy's recklessness could have killed them, immediately becomes ingratiating and tries to smooth things over -- has fallen behind on the rent for various understandable reasons. Now you add the window to what he owes, even though Aydin tries to (pretends to?) brush it aside. He actually lets Hidayet be the bad guy, though Hidayet doesn't come off as muscle. He comes off as reasonable. But previously, Hamdi points out, a debt collector was sent, and his family's refrigerator and TV were taken. That's why the boy was so mad. Why was a debt collector called in? Aydin's father never went so far.

Also living with Aydin and Nihal is Aydin's sister Necla (Demet Akbag). Necla is recently divorced, and she now leads a somewhat aimless but you'd have to say comfortable existence with Aydin and Nihal. She spends her evenings on a couch behind Aydin's desk as he writes articles and essays for the local newspaper. She likes his writing, she tells him, but wonders about his ambition to publish them only in this paper she wouldn't even know existed otherwise. Aydin does have grander ambitions as a writer, however -- a former stage actor, Aydin tells the same hotel tenant who asked about horses that he plans to write a history of the Turkish theater. But he's content to publish these little essays about politics and religion and society in this small paper. His relationship with his sister is full of these genial little disagreements, one of which, involving Necla's curious theory that in order to defeat evil one must simply let it occur so that the evildoer will naturally come to feel shame and therefore change his or her behavior, is sort of the point on which all of Winter Sleep will finally turn. Sort of.

And I've barely said anything about Nihal, Aydin's wife, a character who is hardly insignificant in the film. She does charity work, raising money and donating, for local school causes. The strain between husband and wife can be noticed early when Aydin asks her for advice about a letter he received asking for money to build a school for women to indulge in their creative side. Nihal thinks other causes are more pressing, and can tell Aydin wants to grant the request because the woman's letter was so intensely (and calculatingly) flattering towards him, though Nihal bites her tongue on that note.

But as far as summary goes, I should stop there. Suffice it to say that Aydin's relationship with almost all of these people will fray and even snap over the course of Winter Sleep's three-plus hours. In addition, it should be clear that, a film built upon conversation though Winter Sleep may be, the potential for those conversations is rich. The characters talk and talk, the discussions and arguments lasting for twenty minutes at a time, and Aydin is slowly revealed, or reveals himself, to be a quietly awful person. Not an awful person who is always wrong, I would argue, because I don't believe it interests Ceylan very much to be that simplistic, and during one major blow-out between Aydin and Necla, I found my sympathies shifting every couple of minutes. Even so, Aydin is a condescending, patronizing, selfish, venal bastard. He just never gets on a chair and announces himself as such. Bilginer's performance is of a kind of impassioned naturalism that leaves you feeling no doubt that you're watching a landowner named Aydin, full stop. His co-stars match him. Kilic, as Hamdi, the tenant and imam struggling to keep his family from sinking into poverty, is a marvel as he meets and pleads with Aydin over and over again, plastering on his face a smile so desperately trying to hide its own bullshit because if Hamdi's frustrated, enraged contempt for Aydin ever showed itself, it would be all over for him, for his son, his wife, for Ismael. You can feel your fingernails digging into your palm watching Hamdi just trying to win an extra week's time.

Almost as painful (and there's a real humdinger of a scene that may make you gasp, but never mind about that one) is not exactly the big fight between Aydin and Necla, but the immediate aftermath. Ceylan seems to have a greater respect than most filmmakers, including other filmmakers who write their own scripts, as he does, for the natural emotional impact of the words his characters say. There's a minute or two of silence after Aydin and Necla have finished gutting each other, and the only time I've felt that uncomfortable after a fight is when I've had one in real life. You can feel, first, "Well, this night is fucked" and then "Well, this whole thing might be fucked." Bilginer and Akbag's stillness is the stillness of people who've been slapped, or shot. When Necla finally leaves the room, she carries the unmistakable burden of someone who has to figure out how to go to sleep now.

Winter Sleep isn't all people talking in rooms, either. It gets outside a fair bit, and the rocky, stormy landscape he favors here and in Once Upon a Time in Anatolia has a beautiful edge-of-the-world quality to it. And there's lots of room for little things -- Aydin's relationship with a young Japanese tenant at the hotel is charming and even moving -- and the scene where the wild horse that Aydin has paid to have captured and brought to him has such a violent, exhausting energy that the weight of the never-underlined metaphor, if it's even that, perhaps just the never-spoken poetry, is immense in its absence. If you get what I'm saying. But those are the touches, that's the eye, of a real filmmaker.
Posted by bill r. at 8:43 PM

Sounds a little like the great Jean De Florette and its quietly devastating sequel, Manon Des Sources, and Yves Montand's terrific central performance as the villainous Soubeyrand, all superficial rustic charm and respectability barely disguising a seething malice. Admittedly, I only know those '80s versions of the story, but boy are they good. Highly recommended if you haven't seen them.

Those ARE very good films, and I see the similarity, now that you mention it. Aydin's problem isn't exactly malice, but otherwise you're on to something.