A Monster of Death 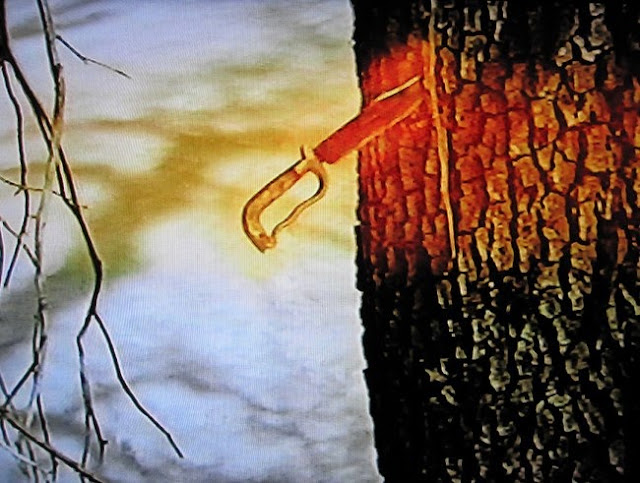 The 70s and 80s sure were a strange time for the horror genre, both in print and on film. Various novels and films, like The Exorcist and Carrie and The Other and so on, were such huge successes, probably because we as a society were still reeling from Watergate or whatever, that they kicked open the barn doors and allowed the genre to come stampeding out and multiply, much like cattle do, you see. The point is, those who could publish your book or (more to the point, as we'll now leave books behind, though what happened there is by no means irrelevant) greenlight your movie discovered that horror was not just some disreputable niche, or rather, if it was the niche was enormous and the disrepute was something that almost everyone in the world had long ago accepted about themselves. In short, horror films were cheap to make and would always, pretty much, make a profit. The upside of this was that a lot of good films got made that otherwise would have never made it past the screenplay stage (it also meant that some talented filmmakers who were not otherwise interested in horror were able to use its commercial viability to at least get a film made, and that distance from the genre could pay off beautifully -- see William Huyck and Gloria Katz's Messiah of Evil, for instance). The downside, of course, was (well, is) that in some cases, possibly a lot of cases, quality control could become a secondary concern, so the cheapness of the genre became something of a self-fulfilling prophecy.  All of this led to some very bad movies, and some very strange movies, and often movies that were both.

See for example Satan's Blade, which Olive Films will be releasing on DVD and Blu-ray tomorrow. So far the only film made by director L. Scott Castillo, Jr. (who also produced and developed the story, which was then banged into a script by Thomas Cue, who also co-stars), filmed in 1980 but not released until 1984, Satan's Blade is a slasher film, as so many horror films were at the time.  It is, however, one of the oddest slasher films I've seen, given that for great big chunks it doesn't seem to want to be, or has forgotten that it's supposed to be, a slasher film, or even a horror film. At first, actually, it's a crime film. A bank is closing, at what looks to be about noon, and two masked armed robbers bust in on the two women who were left to close up the whole bank. The robbers empty the tills, don't seem terribly concerned about things such as vaults, and one of them uses a knife to pop off the buttons on the blouse worn by one of the terrified women. Anyhow, they get their money and shoot both women to death. Cut to the robbers making it back to their hideout cabin where it's revealed that they're both women themselves, if you can even believe it, and much exposition is enjoyed concerning George, an unseen third member of their crew, and how the more hardboiled of the two women wants to double-cross him. "Doesn't $50,000 sound much better divided by two?" And immediately I thought, "You did all this for, basically, less than $17,000 each?" Even if one of them double-crosses the other two (which is going to happen) that person will have committed three murders for $50,000. Which some people will do, but don't then strut around like you're some mastermind. Enjoy your one year off before you have to start delivering pizzas in Belize.

But it doesn't get that far because they're both killed, including the hardboiled one, who is stabbed by someone mysterious. The cabin where all this murder happened turns out to be a rental, one of many at what I guess is a ski resort, though I, admittedly no skier, would have to regard it as fairly shitty as ski resorts go. Shitty or not, the next day it enjoys an influx of customers, including two married couples who are friends and want to rent a cabin together, and a Bevy Of Sexy Girls, who want to ski in their nighties probably. Now, try to remember, the night before in one of these cabins a double murder has taken place. Two policemen, played by Fred Armond and someone with the name Ski Mark Ford, were shown in the murder cabin, looking at creepy symbols drawn in blood on the wall, but when asked by the managers of the ski resort if, now, the day after the murders, it's okay to rent out that same cabin to perhaps the pair of married couples, the cops say "Yeah, that should be okay, we'll keep an eye on it." While not as devoted to the art of homicide investigation as we in the civilian population might wish them to be, that their continued presence is assured has to offer some comfort. In the end, the murder cabin is rented to the Bevy Of Sexy Girls, which in some ways makes the whole thing beside the point because the story focuses on the clump of married people. These include Al (Cue) and his wife Lil (Janeen Lowe), and Lisa (Elisa R. Malinovitz), who is married to Tony (Tom Bongiorno). Tony has just passed the bar exam, and now it's time to reconnect with his wife. The problem is he's irresistible to women, and one of the Sexy Girls, named Stephanie (Stephanie Leigh Steel), has her eye on him. You can see Tony and Stephanie below: 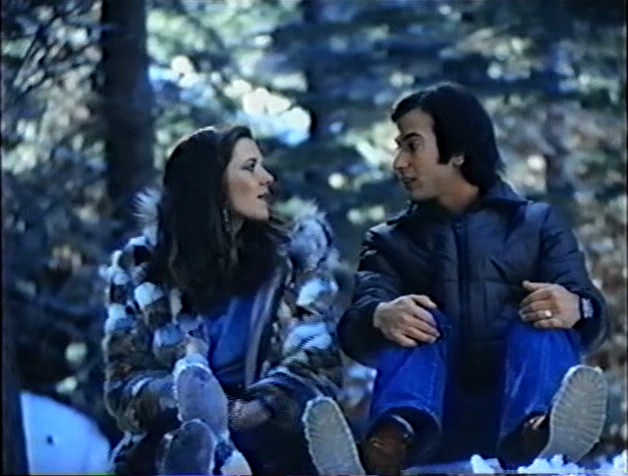 I mean, check out Tony. I wouldn't mind knocking off a piece of that shit myself. No wonder his struggle to resist temptation and devote himself to the woman he married ends up taking up so much of Satan's Blade. Because that's what happens. We're given all the set-up of a slasher film, including the local legend about a crazy mountain man/killer, as well as a sampling of blood early on, but little effort is put into creating any kind of atmosphere of dread or suspense. Instead the question becomes, will Tony fuck Stephanie, or is he, in fact, the perfect man?

For his part, director Castillo may have wanted to inject a little more humanity into the then-burgeoning slasher subgenre than we were/are used to seeing, and good on him for having that impulse, I guess, but he spends a lot of time showing people do things like carry bags upstairs, or talk about going to bed. A scene between Al and Tony, where they stay up late getting drunk, is pitched by both actors at a level that indicates to me that neither man has ever had so much as a sip of champagne in their entire lives (although in fairness, you could say the same thing about just about every film that has ever featured someone who is supposed to be roaring drunk, including Network, and I'm pretty sure William Holden had a nip or two in his day; one film where you'll find a really aces drunk performance is Waiting for Guffman, where being badly drunk is played for both laughs and verisimilitudinous discomfort by Catherine O'Hara. Just FYI). And so on. The film is built on this sort of nonsense that is meant to be drama but is so thoughtless and absurd that you just kind of tilt your head at it. After the meeting between Stephanie and Tony pictured above, the way the film subsequently plays out means the audience is evidently meant to accept that Stephanie goes walking through the woods for literally hours. And not so she can be murdered in the woods, but just so she can not be around. Why? I'll be straight with you, I'm not sure I have an answer to that.

Eventually, murders happen, and here I'll give Satan's Blade some credit. For one thing, holding the majority of your violence until the last twenty minutes is something that even the most famous slasher films actually used to do -- see Halloween and Friday the 13th, for cryin' out loud. It's only later that the murders in such films started to be parceled out for most of the film's length. So anyway, that's not really a problem, nor is it really a problem that the gore effects are pretty weak, because you work with what you got, and not every low-budget horror film had a Tom Savini to turn to. So with my forgiving heart open to Satan's Blade, I will say that once it becomes a horror film it's, you know, it's okay. Much of it is bad, certainly, but there is one bit involving one character hiding under a bed that, considering that this was filmed in 1980, is both rather good and may have been ripped off by lots and lots of people. I don't know. I wish I could track down definitively the first time this idea was used, but my memory is for shit. If it was first used by L. Scott Castillo, Jr. in Satan's Blade, then I tip my hat to him. On top of that, the violence is surprisingly pitiless, if that turns your crank at all, and I didn't see the final twist coming. And, as twists go, this one works. In the end, none of this adds up to very much, but you take what you can get.
Posted by bill r. at 8:10 PM

He looks like Nick Cave. This Nick Cave here:

On top of that, the violence is surprisingly pitiless, if that turns your crank at all...

I guess you could say it makes things sound a lot more interesting to me, yes. No, I don't claim to be a well person.