Tomorrow is the End of the World 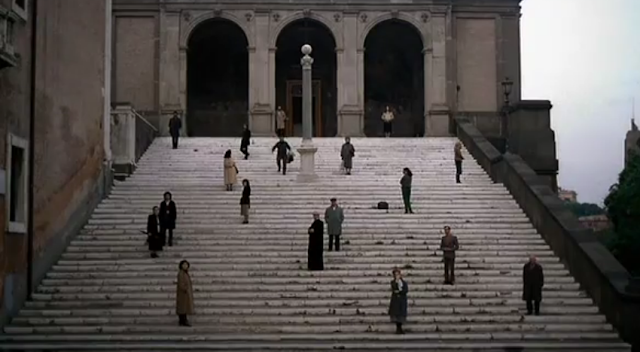 Today sees the release by Kino Lorber of Andrei Tarkovsky’s Nostalghia. This is the first time the film has been available in any kind of high quality home video presentation, and it’s my understanding, though the evidence is purely anecdotal, that until now a general unavailability has caused the reputation of Nostalghia among Tarkovsky’s work to dip somewhat. Having just watched the film for the first time, via the Kino Blu-ray, I am now in a position to sneer at those who would regard it as a weaker effort. “You guys are dumb,” is something I might say. But where would that get any of us? What I'll say instead is that Nostalghia feels to me like a genuine masterpiece, one whose reputation can only strengthen when seen by new eyes.

In the film Oleg Yankovsky plays Andrei, a poet who travels to Italy to study the life of and exiled Russian composer. Accompanying him is Eugenia (Domiziana Giordano), an interpreter with whom he also he has a fraught and unconsummated relationship. The possibility of sex hangs over them both, but Andrei has a family back in Russia, and in general his mind seems preoccupied with other matters. In the course of their trip together, they end up at what you'd call a spa, I suppose, where clients wade in the natural hot springs, but the place is ancient, crumbling, melancholy -- almost sinister, though sinister less in an aggressive sense and more in a sense of hopeless melancholy. There Andrei hears about, and then meets and becomes fascinated by an apocalyptic madman named Domenico (Bergman veteran Erland Josephson), who at one time was so sure the world was about to end that he locked his family up in their home for seven years. Once released, the didn't stick around much longer.

While writing the script (with Tonino Guerra) in Italy and before filming, Tarkovsky had considered defecting from the Soviet Union. However, like the Andrei in the film, he had a family back home and couldn't bring himself to do it. Nostalghia doesn't so much dramatize this split in his desires as it turns them into apocalyptic poetry. And if "apocalyptic" can be described as a form, or a mode, then it is most effective when it's used to not deal literally with the end of the world. This is Nostalghia. Just look at Tarkovsky's depiction of Italy -- nowhere in this film will you see the kind of bright, sunny beauty that you typically find in other films set in Italy, even films that aren't particularly interested in celebrating that beauty. Most times it sort of just happens. But Tarkovsky and cinematographer Giuseppe Lanci film their little patch of Italy as if it was part of the Russian wasteland where Trakovsky shot Stalker. In other words, never has Italy looked more like Russia. Occasionally the film looks like it was (or actually was?) filmed in black and white, but as these scene progress, bits of color seep in, or light up (the opening shot of Andrei and Eugenia's car driving along a foggy road reveals color through the gray in a brilliant way). Green is the one color that finds its way past the dead white of crumbling walls that actually appears inviting -- perhaps that's Italy. Perhaps that's where Tarkovsky longs to be, and the Italy of the hot springs, all dank and sunken and haunted, is where he actually exists because Russia is both never far from his mind, or from his future. The Andrei played by Yankovsky has a tough time getting home, too.

Domenico, however, holds the real power of the film -- he holds the apocalypse, and he holds what little hope is left to anybody. The section of the film that depicts Domenico's fate -- and as intriguing as we, and Andrei (both of them), may find his ramblings it should never be forgotten that he's insane -- is one of the most viscerally terrifying that I've ever seen. It's a scene of complete madness, almost Lynchian in its use of sound, but less otherworldly and more blunt -- what's weird about it is still earthly. It's the end of the world in miniature, and it gave me that weightless, uneasy feeling that you, or anyway I, sometimes get when a film really begins to howl, when the darkness is clarified as not being an artistic pose, or simply appropriate for whatever story is being told, but inherent and unavoidable within the man who made it. Yet even then, you can interpret what follows as..."hopeful" sounds too, well, hopeful, and "optimistic" is precisely wrong. In Nostalghia's final minutes, Tarkovsky can't even be said to urge anyone to not give up. What matters, and I won't be specific about what happens, is that even though it won't work, at least the guy did it.
Posted by bill r. at 9:46 AM

I have nothing to say in regards to the film, being as how I haven't seen it, but I will comment that your reviews have made me vastly intrigued to explore other types of film that I have yet to touch. I want nothing more than to dip into all the madness and beauty that you describe in your posts. I just wanted to say that I appreciate you fueling my passion for cinema.

Now having said that, I'm going to make a list of all the titles you've written about from the time you started the blog.

Thank you, Jose, that means a lot to me. And please, if you're LITERALLY putting together a list, let me know what you come up with.