Hell On the Soul 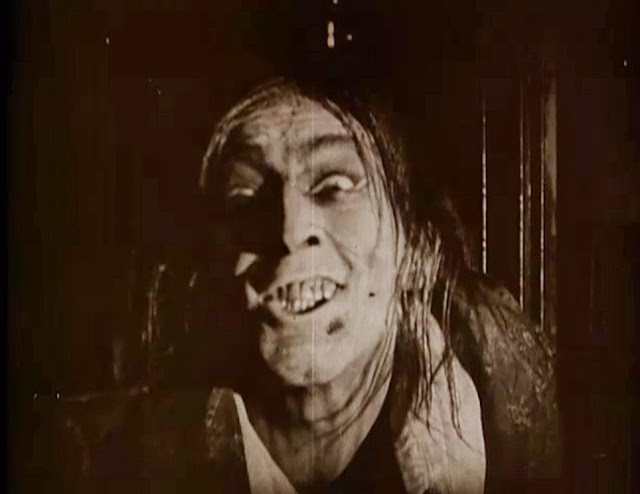 It's often said that action films are only as good as their villains. I'd say this rule does have its exceptions, but broadly speaking yes, if your villain is just some useless fart of a guy, the thrill of seeing him defeated, or of seeing him evil it up big time, if that happens to be your thing, is significantly dampened. This danger exists even when adapting a classic story, because you can take Dracula, for example, and simply by casting the wrong person obliterate over a century's worth of the hard work that went into making him famous. Also, the approach: should Dracula snarl a lot, like vampires do, or should he sit in chairs most of the time? There are a host of choices to make, most of them bad ones.

One of the most reliable villains in film history is also sometimes the hero of the same story, by which I mean, Dr. Jekyll (hero, of sorts) and Mr. Hyde (villain). I've now seen, I believe, four films based on Robert Louis Stevenson's classic novella, one of the Big Three works of 19th century horror that paved the way for the genre we all know, love, and sometimes disdain with great venom. Dr. Jekyll and Mr. Hyde is an interesting case, because while the influence of Dracula can be charted in ways both blatant and vague across the entire vampire subgenre, and Frankenstein (the best of the three, in my opinion, and just for the record) is such a specific story that any influence, which is certainly copious, must nod very directly towards Shelley's original, Stevenson's story has had the greatest impact on werewolf fiction and films, at least the early-to-mid 20th century variety, far more so, from what I can see, than any piece of lycanthropic folklore you might care to point to. The idea in both being, the ravenous and amoral beast in all of us is released, tragically, from within a good man. This has been subverted and messed with, and even discarded, plenty of times, but 20th century werewolves are, essentially, Mr. Hyde. But the ways in which one might depict werewolves is pretty limited -- do they stand upright or are the basically just wolves? is as far as it usually goes -- whereas your options for portraying Mr. Hyde provide a bit more room.

I bring all this up, and am winding towards a specific point, because today saw the release by Kino Lorber of John S. Robertson's Dr. Jekyll and Mr. Hyde from 1920. It's worth noting that this film predates Nosferatu by two years, so in terms of horror film history this is pretty close to the very beginning. And in some ways, it seems not terribly distinguished. By that I mean not much more than "John S. Robertson wasn't F. W. Murnau," but, I mean, he wasn't. But look, back to a point I think I'm making. The other three major Jekyll & Hyde adaptations I've seen each present a different Mr. Hyde. Dr. Jekyll is always kind of a saint, a humanitarian who nevertheless also has some pretty wild scientific and medical theories, but anyway a good guy. Along the way and for subtly different reasons (in the Robertson film, paired with a plot touch from The Picture of Dorian Grey, all it takes for Jekyll is seeing a pretty Italian lady spin around a few times) he develops and takes a potion that is intended to do exactly what it does, which is to separate the two sides of man, the good and pure and the ravenously amoral. In Rouben Mamoulian's 1931 film, starring Fredric March, Mr. Hyde is basically a classic movie monster. In 1941, Spencer Tracy starred in a film directed by Victor Fleming, and he played Hyde, most intriguingly, not as a horror movie figure (though it's still a horror film) but rather as an abusive husband (I was just reminded that Jerry Lewis's The Nutty Professor counts as an adaptation, too, of a sort, and given the specifically masculine element of Buddy Love in that film, there's a connection -- again, of sorts -- to Tracy's performance). Then in 1959, Jean Renoir made The Doctor's Horrible Experiment, a quite faithful adaptation of Stevenson, and here the Mr. Hyde figure (Jean-Louis Barrault) comes across as a kind of sociopathic prankster. All of these are excellent films (including The Nutty Professor), and each Mr. Hyde is at turns fascinating and disturbing, while even occasionally allowing, or inviting, the viewer to recognize the hideous liberation of Jekyll.

But none are quite so vilely horrifying as the Mr. Hyde given to us by star John Barrymore in Robertson's 1920 film. The, what I guess you'd call, design of the character is simple and ingenious, particularly the way Hyde's head comes to a sweaty, stringy-haired point, and the facial contortions Barrymore employs are nearly as powerful as Lon Chaney at his best. The greatest moment in the film is the murder scene -- traditionally, Hyde, though his terrible deeds are endless, kills just one person, but I think we can agree this is one too many, morally speaking -- where Barrymore goes into a frenzy that is both animalistic and satanic. Of course he's animalistic, that's Mr. Hyde's whole deal, but Barrymore seems so much more unleashed than other actors I've seen in the role, as good as they've all been. His glee is terrifying. Murder, his Dr. Jekyll seems to be communicating through his Mr. Hyde, murder...this is that I've been missing. He's not always this manic, of course, and for the most part his Mr. Hyde slithers around London like a caricature of a pervert, which is a perfectly valid way of doing it, but when things finally snap and fly loose, the frantically evil Mr. Hyde carries with him a true sense of Hell. Robertson pumps this up with one image that is not directly capital "i" Infernal, and which if taken literally doesn't make a great deal of sense, but is, taken literally or metaphorically, powerfully strange. I'll let you find that one on your own, when you watch this movie, which you absolutely should do.
Posted by bill r. at 10:57 PM

"Dr. Jekyll and Mr. Hyde is an interesting case..." Or could you say a *strange* case?

Something else that's special about this version (and perhaps I'm misrembering since it's been a while since my last viewing) is that Barrymore looks like he gets worse and worse, physically, each time he becomes Hyde. Like in the scenes where he goes to the tavern, he doesn't look quite as deformed as that screen cap (pointed head, pronounced teeth). I don't recall the other adaptations doing the same. March at least appeared pretty consistently apish in 1931 film.

The Dan Curtis-directed film for television with Jack Palance isn't half bad either.