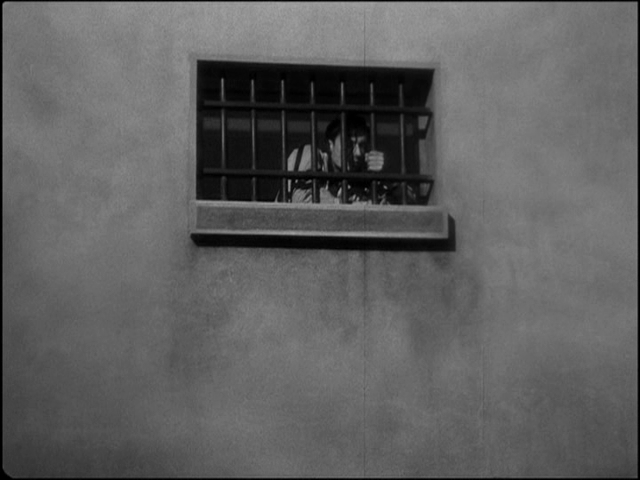 I have been struggling to understand Robert Bresson for some time now. This implies a level of bafflement I don't necessarily feel, but any time I watch one of his films, I usually do think "What is he doing here and why is he doing it?" at some point along the way. And yes, I'm aware that there's a wealth of material on the man and his work that I could read to ease myself along, but I've kind of taken Bresson on as a personal challenge. The actors, usually non-professionals, directed to be blank-faced and emotionless even in moments of extreme distress, the curious decisions to choose this image over that image, when that image would appear to be the point, and this image would appear to be irrelevant, and so on -- all of these aspects of Bresson's films have worked to both keep me at arm's length and demand that I move in closer. It's been too long since I've seen either Au Hasard Balthazar or Pickpocket, my first two, and probably most people's first two, Bresson films, for me to reliably record those experiences, but I do remember watching Lancelot of the Lake and feeling close to the level of bafflement that I earlier tried to deny. Why were his actors like this? The obvious choice in that case to scale the epic fantasy of King Arthur way, way down didn't really get at the heart of anything much, in terms of my own questions, and it left that film for me as a mysterious puzzle, one I chose to be dismissive of, because that's how knee-jerking works.

Later, L'Argent, his last film, did a whole different kind of number on me, and as I write this I wish I'd had a copy of that DVD handy, because I felt at the time, and still feel, that as far as my own connection goes L'Argent holds all the clues. It's such an astonishingly strange, and undeniably compelling, piece of work that it feels like it has a lot more hooks and ledges to grab onto. It also contains perhaps the apex of Bresson's style of directing his actors, in a courtroom scene with the murderous protagonist played by Christian Patey. A sentence has been delivered, and he spits out a condemnation of the court, then pivots like a robot to be escorted away. "Quit expecting me to stop doing this," Bresson seemed to be telling me. "This is why I'm here." Plus, too, I remember L'Argent containing more than the usual share of shot choices focusing on something ordinary -- a close up of a bowl of milk, or was it water? being passed from one person to another -- when more seemingly vital drama is occurring just over there, out of the frame. It became very clear to me as I watched L'Argent that Bresson wasn't dicking around, but perhaps I was.

I can't claim that I jump on any opportunity to revisit Bresson, but I certainly don't turn up my nose at them, either, and one has been provided to me by the good people at Criterion, who today have released his 1956 classic A Man Escaped on DVD and Blu-ray. I'd seen it before, probably around the time I saw Pickpocket and etc., and along with the whole of L'Argent and the occasional Python-esque violence of Lancelot of the Lake (as well as one of the least welcome sights I've ever encountered, about which I shall say no more, from The Devil, Probably), this one has lodged in my brain most securely. Watching it again, it's also by far Bresson's least mysterious, at least in my experience (I understand his earliest films are far more traditional and accessible than the films he'd become known for). L'Argent I suppose would be the Advanced Studies course, and A Man Escaped the 101 class, which is not a comment in any way on its achievement.

But it's all there, or nearly. A Man Escaped stars Francois Leterrier as Fontaine, a member of the French Resistance during World War II who has been arrested by the Germans for planting a bomb. He's facing almost certain execution, but whatever passed for due process among the Nazis still has to be seen to, foregone conclusion or no, so in the meantime Fontaine will spend his hours in prison, mostly among other Resistance fighters. Immediately, however, Fontaine is determined to escape, and A Man Escaped is, indeed, a prison break film, as well as a film about process, in this case the process of planning -- and re-planning -- that prison break. If you allow for some, or even a lot, of simplification, Bresson's style could be reasonably described as an ascetic one, and while it's not at all difficult to make an argument for its appropriateness in any one of his films, you'd have a hard time convincing me that it isn't most plainly at home in A Man Escaped, because what is prison but enforced asceticism? (So is poverty, hence its stylistic applicabality across much of his work.)

So we watch Fontaine endlessly, relentlessly, prepare to do what he is assured by his fellow inmates is an impossible task. The title of the film indicates where this is all going, but even without that you might figure it out anyway. A very stark form of Christianity -- which is not to say judgmental, but rather agonized -- was always part of Bresson's artistic make up, and if ever that hard faith softened, it's here, when Fontaine talks about his assumed escape (he never seems to doubt himself) as being "born again." Hard to miss the parallels, or the metaphor. What's so interesting about the way Bresson approaches this in A Man Escaped is that while he may directly explain that metaphor, he also refuses to give the audience what it would expect in terms of context. We of course know why Fontaine is a POW, and we know, one would hope, the basic history of the situation, but of Fontaine's past we know nothing, of Fontaine's spirituality we know nothing. If he had religion before, he didn't take it as seriously as he does the Religion of Escape. But of course, for those with faith, trauma can either demolish it or strengthen it, and without any context for Fontaine outside of his imprisonment it becomes easy to imagine the 100 minutes we see him contained in that cell as constituting the entirety of his life, with its grief and hope and dread and pain. He gets through it, and escapes. To what? If his imprisonment is his entire life (which, Fontaine being a fictional character who doesn't exist outside of this film, it is) then his escape, which ends the film, ends his life. And takes him to the next part.

In the interest of not completely disappearing up my own something-or-other here, I would say a less abstract comparison to all this is in C. S. Lewis's A Grief Observed, which chronicles his severe crisis of faither that followed the death of his wife. In that book (which feels like something we should not be allowed to read, but there it is) Lewis battles God and terror and loneliness and intense emotional pain, and then he breaks through it and begins to gather up the cards and rebuild the house (that's Lewis's metaphor, not mine; I merely restated it clumsily). This is what Fontaine goes through, with a great and admirable calmness. His blankness indicates only that he's smarter than those keeping him locked up.