If ever a film title quietly foretold doom for the characters within said film, Letter Never Sent is it. However, title aside, in Mikhail Kalatozov's magnificent, devastating 1959 story of Soviet scientists and explorers dispatched to Siberia to find and map out diamond veins, thereby freeing Russia from their economic need for foreign diamonds, and set to be released by Criterion on March 20, the doom starts early, and isn't all that quiet. Even before disaster strikes our four main characters -- which include two geologists, Tanya and Andrei (Tatyana Samoilova and Vasili Livanov), who are openly in love with each other, and a third, Sergei (Yevgeny Urbansky), who less openly, but still blatantly "secretly" loves Tanya -- our protagonist, Sabinin (Innokenti Smoktunovsky), is shown simply writing an ever-expanding, and for now still optimistic, letter to his wife, and director Kalatozov has surrounded him with the shadow, or the projection, of ominous flames. 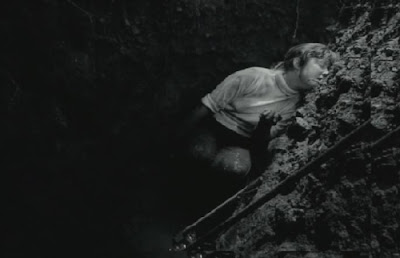 Letter Never Sent is, at its roots, a basic story of survival, though the film ultimately manages to not be basic in any way. For one thing, Kalatozov and his screenwriters occasionally make storytelling choices -- one in particular -- that would be regarded by just about any other filmmaker as dramatically perverse. But more importantly, as nature rises up against our characters and their hope crumbles, Kalatozov lets his visual sense off its tether, or at least gives it a nice amount of slack, so that over the course of the film I was reminded, variously, of Wages of Fear and/or Sorcerer, Malick's The Thin Red Line, The Seventh Seal, Sansho the Bailiff, and even the Algernon Blackwood horror story "The Willows". This last one is no doubt just me, but there's a certain otherworldliness about all this, and topographically speaking Letter Never Sent and "The Willows" have some stuff in common. More to the point, had our heroes' misfortune finally been shown to have its source in some kind of Nameless Evil, the revelation would not have felt entirely out of place. 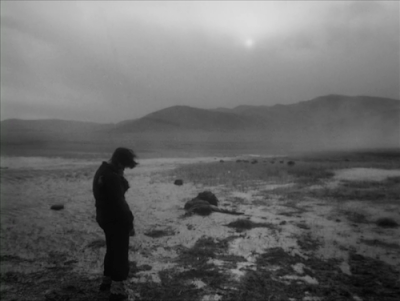 The story told in Letter Never Sent is a stark one, but Kalatozov's style isn't stark. Or, if it is, it's a very heightened starkness. Rushing, hand-held cameras, ghostly silhouettes, fire and hell everywhere. "Stark" would maybe apply to a world after the Apocalypse, but in Letter Never Sent the Apocalypse is here, and current. Death, too, in a film of more severe and arid hopelessness, would be immediate and bloody, or the deterioration of the body would be lingered over, but here death often takes the visual form, if this isn't too oxymoronic, of disappearance, or at least a sealing off from the eyes of the living. This is the mystery of despair. And speaking of counterintuitive visuals, Kalatozov's very modern camera, whose tricks and expressionism are never anything less than justified, somehow reduces the characters, each of them steeped in their modern science, to such primitiveness that the late appearance of a helicopter is fairly jarring. This is achieved, by the way, and not to be too glib, by showing anybody drinking their own pee or contemplating cannibalism or, short of that, eating bark or insects. This is a film where almost nothing is expressed in the writing, other than emotions, but, if I may resort to a synecdoche, through smoke. 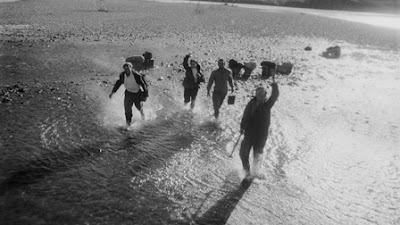 Meanwhile, of course, Letter Never Sent is a Soviet film, and this influence is not missed, though its presence is often conflicted. On the one hand, the movie opens with a scroll of text encouraging others to explore and through exploration move their society along. The scroll ends with a dedication to the Soviet people, and presumably those are the same people being encouraged to explore. However, within the body of the film itself you have characters wondering, absurdly, about a "Diamond City", which would result from their discoveries, and Sergei is shown mourning a life spent looking for "other peoples' treasure." This line is particularly striking in its cynicism, and while it's sort of thrown away in the film, it's hard not to wonder what Khrushchev's censors were doing during that part. Perhaps they simply forgot about it once the film's ending rolled around, an ending that doesn't count as forced or phony, but which seems clearly constructed to live up, in some small way, to that opening scroll, since the audience who might have been initially inspired by those words to take up a life of science and exploration must have, over the following 90 minutes, begun to think "Fuck that noise."

Kalatozov's Letter Never Sent is hardly the first or last Soviet film to be so conflicted, and anyway this submerged struggle adds a certain philosophical vigor to the whole endeavor. But you can take that or leave it, as it isn't exactly The Show. The Show is Kalatazov's eye and restless imagination, and the poetry of survival.
Posted by bill r. at 12:56 PM

I've had my eye on this one since it was announced as it looks beautiful. I'm glad to hear the story itself also has some substance. Now, whether to go buy it now or wait until some sale . . .

I am a great fan of Vasily Livanov. He is my favorite Sherlock Holmes :)

Check out my tribute to Vasily Livanov.